Just a year ago, the nation’s population story focused on a historically slow rate of population increase. Population estimates released in March reiterated the point, noting that more than 73% (2,297) of U.S. counties experienced natural population decrease in 2021 (up from 45.5% in 2019 and 55.5% in 2020). Much of the blame for population growth’s sudden decline was heaped on cities.

A Census Bureau press release credits international migration with reversing the country’s population growth trend: “Net international migration — the number of people moving in and out of the country — added 1,010,923 people between 2021 and 2022 and was the primary driver of growth. This represents 168.8% growth over 2021 totals of 376,029 – an indication that migration patterns are returning to pre-pandemic levels. Positive natural change (births minus deaths) increased the population by 245,080.

“This is the first time net international migration increased since 2016, marking the largest single-year increase since 2010 — an indication that net migration flows to the United States are on track to return to pre-pandemic levels this year,” according to the article. 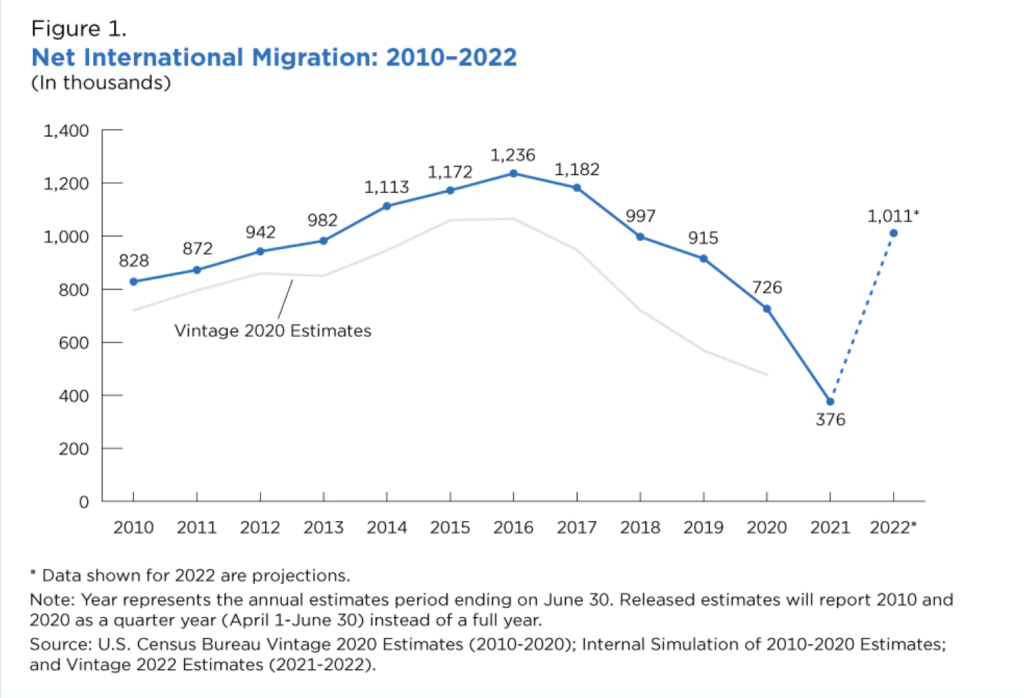 For national news coverage of the new Census population estimates, see articles by Reuters and the New York Times—both focus on immigration as the primary driver of population growth in 2022.

The Census Bureau press release also disaggregates the population data by region, reporting that the South is the most populous, fastest gaining, and fastest growing region in the country. The South’s population increased by 1.1 percent, or 1,370,163 residents. Positive net domestic migration of 867,935 and net international migration of 414,740 contributed the most to the region’s growth.

“The West was the only other region to experience growth in 2022, having gained 153,601 residents — an annual increase of 0.2% for a total resident population of 78,743,364 — despite losing 233,150 residents via net domestic migration (the difference between residents moving in and out of an area),” according to the press release.

The Northeast and the Midwest lost 218,851 and 48,910 residents, respectively, mostly due to domestic out-migration.

At the state level, the Census Bureau reports that Texas gained the most new residents in 2022, with 470,708 new residents. Texas is now the second state in the nation with more than 30 million residents. “Growth in Texas last year was fueled by gains from all three components: net domestic migration (230,961), net international migration (118,614), and natural increase (118,159),” according to the Census Bureau. Florida grew the fastest, and gained the second most residents. It’s the first time since 1957 that Florida ended the year with the largest percent increase in population.

The Center Square seems to be the primary source of news coverage of population estimates at the local and state level. According to Center Square’s coverage, Californians are leaving the state, population loss in Illinois is accelerating,  Arizona was the fastest growing state in the West, and Washington and Idaho both grew (but Idaho grew faster than Washington).

The Census Bureau’s public relations apparatus surrounding the new population estimates does not report how a sudden, unprecedented decline in life expectancy is contributing to the nation’s sluggish growth and reliance on international migration for population growth. NPR published a story based on data from the U.S. Centers for Disease Control and Prevention (CDC) on the same day as the new population estimates. According to CDC data, the expected lifespan of Americans is shorter than it has been in 20 years: “deaths from COVID-19 and drug overdoses, most notably synthetic opioids like fentanyl, were the primary drivers of the drop in life expectancy,” writes Yuki Noguchi in the article.

The population estimates are also determined to an extent by a declining birth rate exacerbated through most of the pandemic and showing only small signs of increasing in 2022.

As a result of declining birth rates and life expectancy, the United States is dependent on international migration to drive population increase. Given the deep political implications of that statement, it’s disconcerting that the Census Bureau presents the new population estimates completely devoid of any hint of the political implications of the nation’s dependency on international migration, especially in a month when the potential end of Title 42 made national news and raised questions that could reach the U.S. Supreme Court. It’s also interesting that so many other contributing political factors—such as public health and the housing market—are absent from the discussion. One can certainly understand why the Census Bureau avoids stepping into politics, but someone has to do it.

An understanding of the population trends in the post-pandemic United States will require connecting the dots of public health, the housing market, the economy, migration, and the environment. The Census Bureau gives the data; planners, citizens, and politicians will have to draw conclusions and consider a response.

California's population continued to shrink for a third consecutive year according to the U.S. Census Bureau's population estimates for the year ending July 2022, but business columnist Jonathan Lansner saw glimmers of hope in the data.