So Much for Peak VMT So much for peak VMT. The planners and analysts who watched vehicle miles traveled (VMT) trends seemingly peak are no doubt anxious as the preliminary 2015 VMT numbers produced by the U.S. Department of Transportation showed new record total VMT well ahead of the 2007 number that many had hoped signaled peak U.S. VMT. Perhaps even more disconcerting was the sharp increase in per capita VMT, up approximately 2.6 percent for 2015. While not surpassing the prior peak per capita travel levels of the past decade of over 10,000 miles per year per person, per capita VMT nonetheless showed substantial growth during a time when the economy was far from robust. Figure 1 shows the upward sloping total and per capita VMT trends. 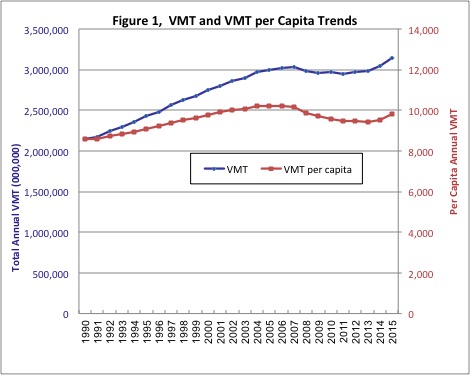 While individuals, perhaps someone who bought one of those 17.34 million autos sold in the U.S. 2015 (also a new record) and had a reliable vehicle to travel cross country to visit grandma, celebrate the sub $2.00 gas and the chance to travel more, others, anxious about the congestion, energy use, or emissions of more travel, may be rethinking premature obituaries for auto travel. 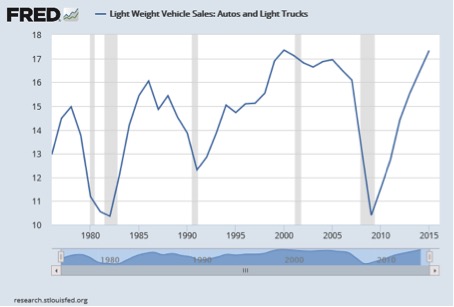 After exhaustive speculation, one can compile a list of causal factors for the upward spike:

Or maybe not. While current data on individual travel behavior changes is not available, even the aggregate data can shed some light on the trends. The change in VMT in rural areas increased 3.86 percent versus 3.37 percent for urban roads suggesting long distance and freight travel growth. Urban travel constitutes 69 percent of total VMT. Truck VMT data will be available later and data on VMT for commercial vehicles, public vehicles, and utility vehicles can only be guesstimated. Freight and these uses of non-household vehicles collectively constitute 24 percent of all roadway travel, hence deserve attention when interpreting trends.

The reduction in fuel price is reasonably hypothesized as a contributor to VMT growth. Historically travel elasticity to fuel cost has been estimated to be around -0.02 to -0.04 in the short term and considerably larger in the long term. The pronounced decline in fuel prices, with average 2015 prices 30 percent below the 2013 average and with current prices 47 percent below the 2013 average price, could explain part of the VMT increase. 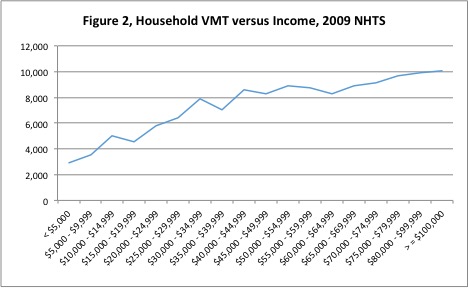 Another way to think about the impact of lower fuel prices is to consider that the average household has an estimated $1000-$1500 more in discretionary income annually as a result of the lower gas prices relative to 2013. Data from the National Household Travel Survey show travel goes up approximately 100 miles per capita annually per $1000 in household income for low and moderate income households (see Figure 2). Coupled with 2.5 million additional persons in the workforce and some wage growth, the VMT growth is understandable.

Perhaps most important will be understanding how VMT will trend going forward. Many of the considerations that contributed to the slowdown in VMT growth in the early part of this century are still relevant as argued in The Case for Moderate Growth in Vehicle Miles of Travel: A Critical Juncture in U.S. Travel Behavior Trends, Center for Urban Transportation Research, University of South Florida, April 2006). The role of technology in moderating travel demand is still at work with e-commerce, distance learning, telecommuting, and improved travel logistics dampening demand. And those urban millennials may be contributing to moderated demand even if not to the extent hyped by advocates of declining VMT. But the desire to travel to pursue personal opportunity and pleasure remains potent. For a large share of the population, total travel demand is governed by resource constraints, both time and money, not a diminished desire to participate in activities – many that require travel. While few desire to commute farther and may not relish accumulating VMT for routine errands, the always present and growing interest in accumulating life experiences rather than possessions may create more VMT for personal experiences and longer distance social and recreational travel counteracting the savings from greater urbanization, communications substitution for travel, or taking advantage of alternatives to personal vehicles for daily household serving travel.

In any case the verdict is still out. It will be interesting to watch as trends in the economy, demographics, technology, culture, values, and maybe even urban and transportation planning and investments influence future vehicle travel demand.

The Car-Centric World and the Ongoing Expansion of Police Powers

While cars are still equated with freedom of mobility and personal liberty, they've also offered courts the chance to expand police powers in the public realm, time and time again.

Urban economist Joe Cortright examines the connection between gas prices and driving in the U.S. over the last two decades. Prices matter: increased gas prices results in decreased driving, providing the prices persist for the long-term.