The Center for Opportunity Urbanism has a wonderful goal—to improve economic opportunities for working class households—but uses terrible research to reach confusing recommendations about which policies are best. Please do better! The Center for Opportunity Urbanism recently released a report by Tory Gattis, Maximizing Opportunity Urbanism With Robin Hood Planning, which advocates various policies to increase economic opportunity for disadvantaged residents. This is a wonderful goal that is sometimes overlooked in the planning process, and Gattis recommends some policies I support, including more affordable infill development and more walkable neighborhoods. However, the report primarily advocates more automobile dependency and sprawl, and the research Gattis uses to justify his conclusions is terrible.

The report's main argument is that Smart Growth policies reduce affordability, ignoring extensive research, such as the Housing and Transportation Affordability Index, which indicates that total housing and transport costs tend to be lowest in compact, multi-modal neighborhoods. Gattis bases his arguments on data from the C2ER Cost of Living Index (Index), which, contrary to Gattis’s claims, is not an affordability indicator. The Index compares the prices of various goods typically purchased by affluent (top income quintile) households; it is intended to help determine how management professional wages should be adjusted in different cities. It does not reflect lower-income household purchases, and does not adjust for many Smart Growth cost savings, such as vehicle and utility cost savings, and so does not reflect affordability. For example, the Index measures variations in gasoline prices and vehicle repair rates, but not variations in the number of vehicles household own or the annual miles they drive, and therefore the savings provided by more compact, multimodal neighborhoods. Similarly, it measures the prices of large, single-family houses (excepting in Manhattan), and so fails to account for the savings provided by more compact housing types, such as townhouses and apartments.

Based on this analysis, Gattis concludes that Houston, Texas is the most affordable city in North American, but the Bureau of Labor Statistics (BLS) Consumer Expenditure Survey data tell a very different story. Although Houston households spend a relatively small portion of their budgets on housing (33.1 percent), they spend the most on transport (21.0 percent) of the 17 cities surveyed, resulting in the second highest combined housing and transport spending (54.1 percent), exceeded only by Miami (56.1 percent), as illustrated below.

Gattis ignores basic data which would test his claims. Texas in general and Houston in particular fare badly with regard to economic outcomes: they have low average incomes, high poverty rates (particularly for children), low education attainment (29 percent of adults have a Bachelor's degree or higher, compared with 33 percent nationwide), and very low homeownership rates (only 45 percent of households, compared with 64 percent nationwide). This certainly belies Gattis' suggestions that sprawled, automobile-dependent cities such as Houston increase economic mobility.

Gattis argues that high household transportation spending typical of sprawled communities does not indicate inaffordability. He writes, "when it comes to calculating transportation costs, it is important to strip out the luxury component of the data. If a city has a low cost of living, many people may splurge on very nice luxury vehicles and SUVs—and thus look like they have high transportation costs (a common mistake in many studies—but it’s important not to confuse that with the basic cost of transportation in that city. It can make suburban densities look far more expensive than they are in reality, where a basic used Honda Civic or Toyota Prius or an even less expensive car is just as effective for getting around as a BMW but at far lower cost."

This comment indicates that Gattis does not understand the problems facing low-income households, many of which struggle to own and operate even the cheapest cars. Although lower-income motorists use various strategies to minimize their costs, such as owning cheap, older cars and performing some of their own repairs, their vehicles tend to be costly to operate and unreliable. Including fuel, maintenance, repairs, insurance, and registration costs, owning and legally operating an automobile generally costs at least $3,000 annually, and more if driven high annual miles. According to the Consumer Expenditure Survey, the lowest income quintile spends, on average, $3,074 per vehicle, which is an unaffordable 31 percent of their average income. For low income households, affordability requires minimizing vehicle ownership and use, by sharing vehicles among multiple drivers or being carfree, and relying on more affordable alternatives as much as possible. This requires living in a neighborhood with good transportation options. In contrast, sprawl forces households to rely on automobiles, even if that is unaffordable, because there is no reasonable alternative.

If Gattis were correct that high vehicle expenditures reflect spending on luxury vehicles, vehicle costs would be progressive, that is, they would be proportionately larger for wealthier households. They certainly are not, as illustrated below: vehicle costs are highly regressive. 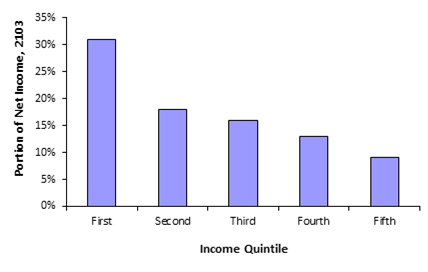 Vehicle expenditures are regressive: they are a much larger portion of income for poor than affluent households.

Gattis cites studies showing that automobiles allow commuters to access more jobs than other travel modes, and that lower-income workers located in automobile-oriented cities tend to work longer hours and earn more money if they have a car. Certainly automobiles can increase job opportunities and some jobs require workers to own a vehicle, but his analysis ignores three important factors:

In fact, good research indicates that Smart Growth does improve economically-disadvantaged residents' overall economic outcomes compared with automobile-dependent sprawl. Using data from the Equality of Opportunity Project, Ewing and Hamidi found that each 10 percent increase in their Smart Growth index is associated with a 4.1 percent increase in residents' upward mobility (the probability a child born in the lowest income quintile reaches the top quintile by age 30). Gattis cites this research but misrepresents its findings: although he implies that automobile transportation increases economic opportunity, the study actually found greater economic mobility in accessible, multimodal neighborhoods, as illustrated in the following figure. 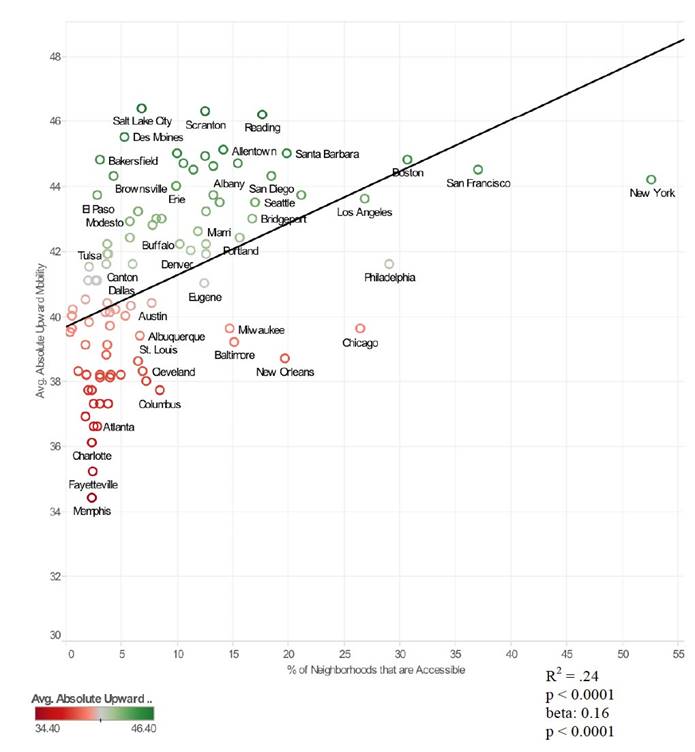 Gattis ignores additional costs to households associated with sprawl, including higher infrastructure and transportation costs, obesity (honesty in advertising should require that the report’s illustrations show overweight models, reflecting the much higher obesity rates in automobile-dependent communities), traffic fatality rates (sprawled neighborhoods have two to four times the traffic fatality rates of smart growth neighborhoods), and chauffeuring burdens, all of which tend to decline with Smart Growth policies.

Gattis points out that a 40 percent increase in travel speed doubles geographic accessibility (the area that can be reached within a given time period), but ignores research showing that increased development density and mix provides far greater increases in accessibility. Smart Growth policies that result in more compact and mixed development can do more to increase disadvantaged workers' employment opportunities than policies that increase travel speeds, and high quality public transit that stimulates transit-oriented development, and so increases the portion of high-quality jobs that are easily accessible by transit, are particularly effective at improving economic opportunity.

Gattis is inaccurate and unfair when he claims that planners are unconcerned with increasing economic opportunity for disadvantaged people. On the contrary, most planners I know are very concerned about this issue: They are often the primary advocates for disadvantaged groups in the planning process, and despite criticism and personal threats, for example when presenting proposals for multi-family housing to neighborhood groups, they work hard to improve affordable housing and transport options for the sake of improving economic opportunity.

Gattis argues that Smart Growth consists of "draconian" regulations that "socially engineer" households into high-density, transit-oriented developments, but is not specific. Smart Growth allows more development density and mix, reduces parking requirements, creates more multimodal transport systems, and encourages employment near high quality transit (bus or rail); what is draconian about them? Academic studies find that sprawl-inducing regulations are far more common than Smart Growth regulations, and automobile-oriented facilities continue to receive the majority of transport funding. There is also good evidence of growing consumer demand for housing in compact, multimodal neighborhoods, and serving this demand can provide community benefits including reduced traffic and parking congestion, infrastructure costs and traffic accidents. Most North American cities, particularly Houston, have an abundant supply of sprawl housing and are building more, the shortage is for housing in compact, multimodal neighborhoods.

Most of the report's citations are newspaper articles or documents by pro-sprawl policy institutes such as the Reason Foundation and New Geography; there are few peer reviewed publications. Some of Gattis' evidence is misrepresented or silly:

Annual "Food away from home" Spending

I agree with Gattis that improving economic opportunity is an important planning goal that requires efficient and affordable transportation options for disadvantaged households. Since most vehicle expenses are fixed, affordable transport requires living in accessible, mixed, multi-modal neighborhoods where it is possible to minimize vehicle ownership. This does not mean that lower income households never own a motor vehicle; certainly for some, automobile ownership is important for accessing education, employment, and services, but many lower-income households can benefit significantly from being able to rely on affordable modes—walking, cycling, and public transit—as much as possible, so they can share vehicles among multiple drivers and minimize their vehicle costs. Smart Growth in general, and transit-oriented development in particular, are the planning strategies that make this possible; for example, residents of transit-oriented neighborhoods own half as many vehicles on average, and spend far less on transport than they would if located in sprawled locations. Yet, Gattis criticizes these strategies based on his incomplete analysis and biased evidence.

Gattis' report is the latest in a series of inaccurate and biased documents criticizing Smart Growth. Although some of their arguments contain a kernel of truth, for example, urban growth boundaries can increase housing prices unless implemented with policies to allow more compact infill, and lower-income households sometimes benefit from owning automobiles, their analysis is incomplete, biased, and careless. Gattis is wrong to claim that Houston is more affordable overall for lower-income households; the evidence he presents does not meet the most basic standards of good research. Similarly, his attacks on planners are groundless, indicating that he is unfamiliar with our work. If the critics really had a case—if Smart Growth really did harm poor people or reduce economic opportunity—they should be able to show it using credible evidence.

Gentrification, for Better and Worse

Gentrification—more wealthy people moving into lower-income communities—often faces opposition, sometimes for the wrong reasons. It is important to consider all benefits and costs when formulating urban development policies.

The Vermont legislature passed a bill that encourages residential construction in village and town centers by offering tax credits and reducing permitting requirements. 20% of the homes and rental units must be affordable.