Contrary to popular assumptions, large, transit-oriented cities have lower crime rates than smaller, automobile-oriented cities. Jane Jacobs was right! This column discusses this phenomenon and its implications for transport and land use planning.

If you believe that large cities are dens of violence and crime, you are understandably wrong. First, let’s look at why you might think so, then examine what data actually indicate, and discuss their implications for transportation and land use planning.

It is true that per capita crime rates tend to increase as communities grow in size from a village to a town, to a city, and that crime rates increased between 1955 and 1976, as indicated in this classic graph by Claude Fischer. 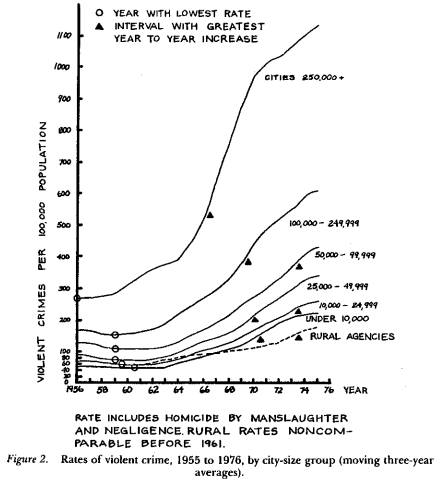 Violent crime rates increased with city size and grew rapidly between 1955 and 1976, the period of growing automobile travel and suburbanization.

Several factors can help explain these patterns. The positive association between community size and crime rates probably reflects differences in community cohesion: smaller community residents are more likely to know and befriend their neighbors, or described differently, city residents experience more anonymity and alienation. Crime rate increases during last half of the twentieth century where probably caused by a combination of increased mobility and sprawl (people traveled more and were less connected to their community), large numbers of young Baby Boomers (young people tend to commit more crimes), and high levels of violence-inducing lead toxin in urban residents from gasoline and paint.

It is also true that the highest crime rates tend to occur in dense central city neighborhoods and the lowest in low-density suburbs. This pattern can be explained by income variations: high crime rate urban neighborhoods have concentrated poverty and associated problems such as alcohol and drug abuse, and mental illness, while the low crime rate suburbs have high incomes, in part because low-income people are excluded by automobile dependency.

These patterns do not mean that large cities are necessarily dangerous, that total crime increases if people move to large cities, or that individuals face greater risk by moving to urban neighborhoods. Most violent crimes, particularly murders (about 70%), resulted from conflicts between acquaintances; their risk varies geographically due to demographic factors such as poverty, but does not increase when people move from one area to another.

Crime rates peak in medium size cities (250,000 to 500,000 residents) and are significantly lower (23% lower violent crime rates, and 32% lower property crime and vehicle theft rates) for the largest cities (over a million residents), as illustrated in Figure 2.

Crime rates tend to increase as community population grows, peaks at about 500,000 residents, and declines significantly for the largest cities, which also have the highest transit ridership rates (AATPMPC = Average Annual Transit Passenger-Miles Per Capita).

This is a fairly recent phenomenon. Crime rates were much higher during the last quarter of the twentieth century, but subsequently declined significantly, particularly in large cities, as illustrated in Figure 3. These reductions probably reflect a combination of aging population (older people commit fewer crimes), lower blood lead levels, improved passive surveillance (more responsible people who can report potential threats, due in part to mobile telephones), improved policing methods, and declining drug use. 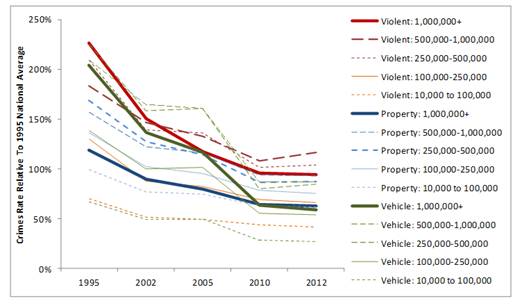 Of particular interest are the relatively low crime rates in large cities. Several factors may help explain this:

In other words, large, compact, multi-modal cities have some attributes that increase crime and others that suppress crime. During the second half of the twentieth century, crime–stimulating factors overwhelmed crime-reducing factors causing crime rates to grow, but many of the crime-stimulating factors have peaked and the crime-suppressing factors are growing, making cities safer.

There is empirical evidence supporting the conclusion that multi-modal transport planning and smart growth policies increase community safety and security. Crime rates tend to decline with increased public transit ridership, as illustrated in Figure 4. Since transit, walking and cycling are complementary, walking and cycling are probably also negatively associated with crime rates (all else being equal, the more people walk in a neighborhood the safer it is). 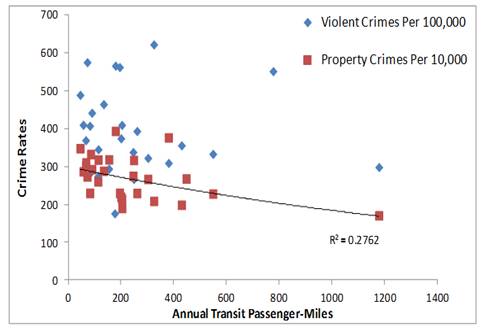 The lower crime rates associated with alternative modes can provide large economic savings. Property crimes against pedestrians, cyclists and transit passengers are both fewer and lower in value than automobile crimes: they typically involve the theft of a telephone, wallet or bicycle worth a few hundred dollars, compared with a typical automobile crime which involves a vehicle theft or vandalism that costs a few thousand dollars. For example, in 2012, the New York City Region averaged 125 annual vehicle thefts per 100,000 residents, which costs about $7.50 per capita (assuming $6,019 per theft), compared with 476 vehicle thefts per 100,000 residents in automobile-oriented San Bernardino County, costing about $30 per capita. Taking into account the other motor-vehicle crimes (thefts from vehicles and vehicle vandalism), crime costs appear to be $50 to $150 lower per capita annual in transit-oriented cities than in automobile-dependent cities. If true, these crime cost savings alone could justify large increases in public transit investment.

This suggests that improving walking, cycling and public transit, and smart growth development policies, tend to increase safety and security. This conclusion is very different from common perceptions because conventional crime risk analysis  fails to distinguish between crime shifts (the same number of crimes occur, in another location or to other people) and crime reductions (fewer crimes occur). The traditional response to crime was for individuals and communities to try to distance themselves from higher risk populations: households relocate from cities to suburbs, and neighborhoods tried to exclude lower-income households by discouraging cheaper and multi-family housing development. These solutions fail to address the root causes of crime, such as poverty and alienation; on the contrary, by concentrating poverty, isolating people from their neighbors and reducing passive surveillance they tend to increase crime risk.

These factors can result in a self-reinforcing cycle of more responsible (non-criminal) urban neighborhood residents, pedestrians and public transit users, which improves urban services, which improves economic opportunities, reduces crime rates, and reduces fear and the stigma of urban living. 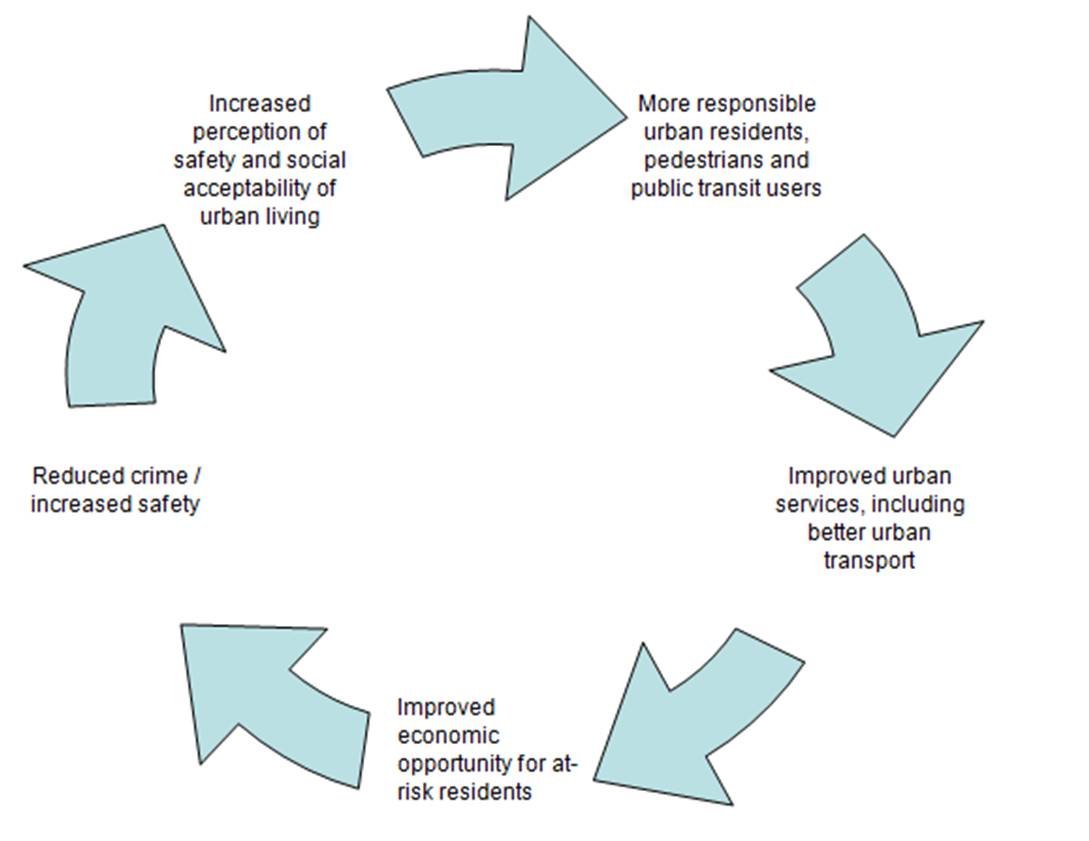 This is not to deny that urban residents and transit users sometimes face crime risks and discomforts. These reflects the profiles of the people who live in cities and use public transit: although most are responsible, considerate and clean, a portion have conditions associated with crime and anti-social behavior including poverty, drug addiction and mental illness.

Actual crime risk varies depending on conditions. For example, transit travel is usually quite safe due to surveillance by employees, passengers and by-passers. Risks may be higher when walking or cycling on isolated paths to access stops and stations, although even these risks are usually modest, no greater than the risks motorists face walking to and from parked cars, or pet owners face when walking a dog. Transit agencies can reduce crime risks by implementing more security systems (security patrols and cameras, and emergency alarms), through crime prevention through environmental design and neighborhood watch programs. Individuals can reduce their own crime risks by carrying a mobile telephone and avoiding high risk situations, for example, somebody who normally travels by public transit may hire a taxi when returning at night from an isolated destination.

This is an important and timely issue because misplaced fear is often a major obstacle to efforts to encourage more efficient travel and development patterns. Most people assume that walking, cycling and public transit are more dangerous that automobile travel, and that denser, mixed-use, urban neighborhoods are more dangerous than more sprawled suburbs. As this column shows, there is some truth, but a lot of inaccuracy, in these assumptions.

The belief that cities are dangerous is ultimately based on the assumption people are fundamentally bad, so more people in an area increases conflict and crime. Research does not support these assumptions – accounting for demographic factors such as concentrated poverty, crime rate decline rather than increase with increased urban density.

Crime is, of course, just one type of risk affected by planning decisions: traffic accidents and sedentary living tend to injure, disable and kill more people than crimes. These risks also tend to decline in more compact, multi-modal communities.

This is exciting research. To my surprise, there is relatively little information on the relationships between transportation and land use patterns and crime risk suitable for planning or for reassuring urban residents and transit passengers of their overall safety and security. I am incorporating it into my report, Safer Than You Think! Revising the Transit Safety Narrative, and hope to expand this research into other areas. Please let me know if you have related information that I overlooked, or suggestions on how to perform this research.

Op-Ed: Facial Recognition on Transit Goes a Step Too Far

Despite its insistence that the technology would only target criminals, Dallas Area Rapid Transit (DART) should reconsider using facial recognition software to address crime. The potential for abuse may be too high.

What Makes San Diego Walkers Stop So Much?

Many families move to sprawled, automobile-dependent suburbs because they want a safe place to raise their children. They are mistaken. A smart growth community is actually a much safer and healthier place to live overall.