Be Careful With Statistics

Last week the Carnegie Endowment for International Peace published a report, In Search of the Global Middle Class: A New Index, by researcher Uri Dadush, which uses car ownership rates as an indication of the size of a country&#39;s middle class

Last week the Carnegie Endowment for International Peace published a report, In Search of the Global Middle Class: A New Index, by researcher Uri Dadush, which uses car ownership rates as an indication of the size of a country's middle class, defined as a household that can purchase non-essential goods. The results are summarized in the figure below, which were reported in an Atlantic Monthly column, It's Official: Western Europeans Have More Cars Per Person Than Americans by Max Fisher, and cited in Planetizen, Europeans Have More Cars Than Americans - Say What?

Figure 1  Cars and Consumption Per Capita

This graph from Dadush's study implies that the U.S. has relatively low motor vehicle ownership rates, but these statistics exclude light trucks, vans and sport utility vehicles which make up nearly half of the North American private vehicle fleet.

Unfortunately, Dadush's study has two flaws. First, the data confuses cars and automobiles. The World Bank defines cars as "road motor vehicles, other than two-wheelers, intended for the carriage of passengers and designed to seat no more than nine people," but U.S. vehicle statistics separately report cars and light trucks (which includes vans and sport utility vehicles), together called automobiles. In North America about 45% of the automobile fleet consists of light trucks, which are excluded from the graph above.

The following graph compares total motor vehicle (not just car) ownership rates for various countries. In 2009 the U.S. had 802 vehicles per 1,000 population, which is much higher than most peer countries, and represents more than one vehicle per licensed driver. This is an example of the confusion that can result if statistics are misinterpreted. 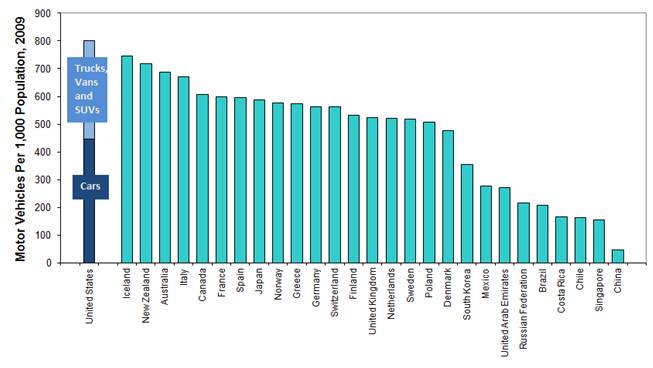 Including both cars and light trucks, the United States actually has the highest per capita motor vehicle ownership rate among peer countries.

To clarify this issue Dr. Dadush is adding the following footnote to his paper: "The U.S. figure for passenger cars does not include light trucks, vans, or sport utility vehicles. These types of vehicles are often used to transport passengers in the U.S. and, therefore, contribute significantly to the total number of passenger vehicles in the U.S. But because they are generally used in developing countries for transporting goods, we do not include them in this analysis intended to measure the global middle class in developing countries. Their exclusion does not change the main conclusion of this paper-that the global middle class in developing countries is likely much larger and expanding far more rapidly than income-based measures of this population suggest. Insofar as light trucks, vans, or sport utility vehicles are used in developing countries for the purpose of transporting passengers, this only strengthens the main conclusion of the paper."

Such confusion is common when working with Transport statistics. There are numerous overlapping definitions and data sources. Although I use them regularly, I am often flummoxed. Fortunately, there are now efforts to improve transport-related data, but progress is slow, and we are actually losing some data sources, as I discussed in a previous column, Choosing Ignorance is Stupid.

A question that several people have raised in this discussion is whether vehicle travel (as opposed to ownership) follows similar patterns. Below is a graph copied from my report The Future Isn't What It Used To Be: Changing Trends And Their Implications For Transport Planning. It indicates that in most wealthy countries per capita passenger travel peaked about 2000, and is about twice as high in the U.S. than in peer countries. 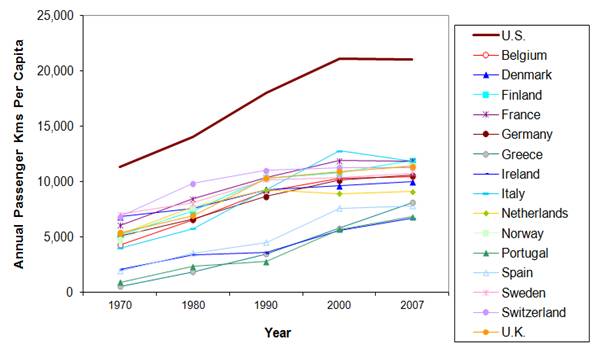 Per capita vehicle travel grew rapidly between 1970 and 1990, but has since leveled off and is much lower in European countries than in the U.S.

Dadush's analysis fails in another way. The car index is based on the assumption that there is a direct correlation between vehicle ownership and social development, but this relationship is actually highly variable. For example, vehicle ownership is relatively high in the United Arab Emirates (313 vehicles per 1,000 population in 2007, and rising rapidly), despite its relatively small middle class (most residents are contract workers who lack basic civil rights), and relatively low in Singapore (156 vehicles per 1,000 population in 2009), although it has a large middle class. Analysis illustrated in the following graph shows the much lower vehicle ownership rates in Europe and Asia than in the U.S. and Australia. Per capita vehicle ownership rates tend to increase with economic development to a point, but eventually peak. Where this peak occurs depends on public policies such as fuel and parking prices, roadway supply, the quality of alternative modes, and land use policies. 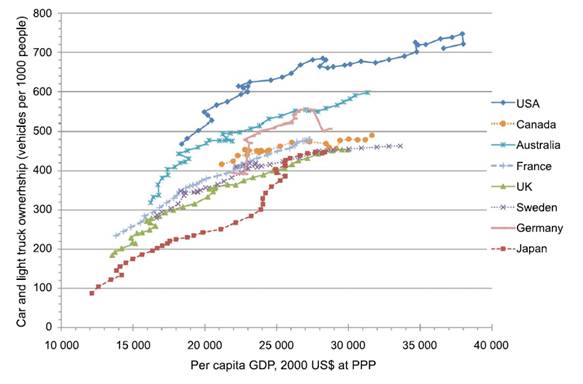 Vehicle ownership per capita tends to increase rapidly as per capita GDP increases from low to middle-incomes but eventually peaks. The level at which this peak occurs varies depending on public policies.

It would be harmful for policy makers to encourage automobile dependency (a transportation system which forces people to drive due to inadequate alternatives) simply so they can claim that their middle class is growing. For example, it would make no sense to favor automobile travel over non-motorized and public transport to support development objectives. As discussed in Yes, We Can Have a Healthy Environment and Economic Development: Reconciling Conflicting Planning Objectives, many policies that reduce vehicle ownership support economic development. It is therefore inappropriate to assume that policies that increase car ownership necessarily support economic and social development objectives.