Transportation expert Norman Garrick reports on the amazingly effective transit system of Zurich, Switzerland. Garrick says the system is one of the factors that makes Zurich one of the most livable cities in the world. 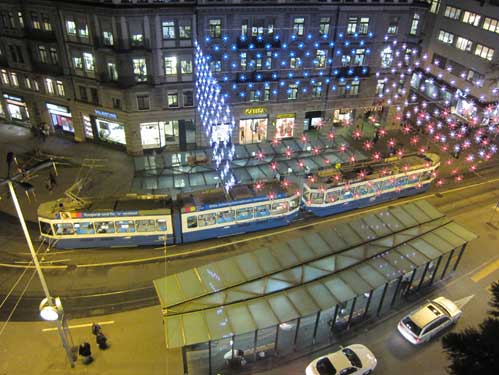 This fall I am living in Zurich, Switzerland as part of my sabbatical year research. I am in Zurich because I have long been impressed by its transit system and wanted to spend some time trying out the system as a resident – kicking the tires so to speak and seeing how the system stands up to close scrutiny. I had always had the impression that the transit in Zurich must be one of the best in the world, if not the best. What I am finding after two weeks is that transit here is even better than advertised.

Previously, as a tourist all I was interested in doing was traveling to the city center. Now I have the challenge of commuting every day to my office at the Swiss Federal Institute of Technology (the ETH). Currently I live in a small bedroom community just outside Zurich called Urdorf, a sleepy little place, which is nevertheless well served by transit, including the two stops on the commuter rail line out of Zurich and at least two bus lines.

The campus of the ETH where I am working is the less fashionable location - where they put engineers, architects and science types on a hill (the Honggerberg) surrounded by green fields outside of the city center. Yes, I do ask myself what exactly were they thinking in the 1960s when they built this seemingly isolated campus that could well have been designed by Le Corbusier himself. But is interesting to note that if there are people driving to the campus I have yet to encounter them. I have actually gone searching for the secret parking lot but have not found it as yet. The campus is actually served by four bus lines with buses, filled with people, passing every 3 minutes or so much of the day. 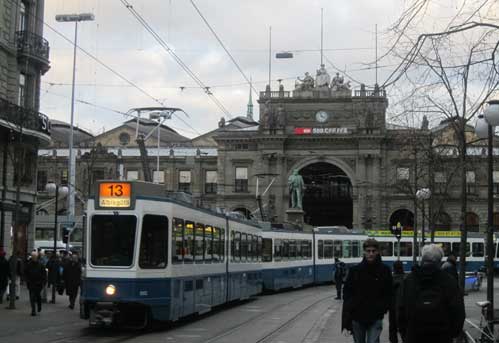 The thing that sets Zurich apart is not just the frequency of the individual bus lines, but the density and interconnectedness of the overall network of buses, trams, commuter rail, funicular railroads and ferries on Lake Zurich. So each morning I have to decide what is the best way to get to the ETH from Urdorf. With my American mind-set I had the idea that to get from one edge place to the other I would have to go through the center of town. I quickly learned that in Zurich it does not work from like that – trips between any two places are much more direct.

So the choice of taking the S9 suburban train to the No. 80 bus, or the No. 308 bus to the No. 13 tram to the No. 80 Bus, is partly a function of how I feel that morning. Do I want to stop by the bakery first, or do I feel like a brisk stroll or am I feeling lazy.

So one lesson that I am learning in Zurich is that an important element in getting 60% of the people in a very wealthy city to use transit is by making an extremely flexible system that is convenient for travel to almost any point in the city, the surrounding communities and even into the nearby Alps. The coordinated and integrated system here makes the American transit obsession with the one-seat ride seem downright silly and totally impractical for serving any but the idealized radial city that probably exist only in the mind of the planner.

The other surprising lesson I am learning is that the out of pocket cost for transit in Zurich can be surprisingly low. I quickly discovered the advantages of buying a monthly pass costing less than $3 a day that gives me full access to all transit in the city (except maybe the museum tram with the uniformed conductors – I have not figured that one out yet). As a tourist I was buying a more expensive day pass, which cost $12 per day.

So who pays the freight for this incredible system? Well, surprisingly almost 50% of the cost is from the fare box – this is much higher than most transit systems in the United States. What is clear is that the benefits to the city are immense. The city is remarkably free of cars and all that goes with it – the noise, the pollution, the traffic accidents, the big roads and parking lots. In fact, since Zurich started a program of constantly upgrading their transit system in the late 1970s they have been able to reduce parking in the city center, curtail the building of highways and have actually converted an increasing amount of street space to transit use and public space for people.

The real story of Zurich is not just about the current state of transit in the city but also a 40-year history of constant upgrades to transit and a lessening of the impact of cars on the city over that time and the concomitant flowering of the city as one of the most livable in the world. It is a story that should be better known in the USA, if only to contradict the idea that in order to thrive cities need to turn themselves into machines for moving traffic. In Zurich they have slowly and steadily worked over the last 40 years to do the exact opposite, while making the city more livable in the process.

Norman Garrick, PhD is an associate professor of civil and environmental engineering at the University of Connecticut. He is also a board member of the Congress for the New Urbanism.

In 2021, public transit-related ballot measures passed with strong support across the country.

By prioritizing a multi-modal approach and preserving existing vehicle space, the Seattle Department of Transportation risks abandoning the goals of its bicycle master plan.