The conventional wisdom says that we need strict planning to build pedestrian- and transit-oriented neighborhoods and regions. Yet the anti-freeway movement of the 1960s and 1970s and the anti-sprawl movement of recent decades were successful because they treated urban design as a political issue - not as a technical problems that the planners should solve for us.

For my book, Unplanning: Livable Cities and Political Choices, I researched the political choices underlying urban design by using a thought experiment that looks at how cities would be designed if they were built with three different limits on the automobile, assuming that residents prefer low densities.

The first ideal type I identified is a ban on automobiles for personal transportation in the city, which could give us neighborhoods like the streetcar suburbs that were popular in America a century ago. Because Americans are wealthier now, virtually everyone who wanted to could live in neighborhoods like the streetcar suburbs where the minority of Americans who were middle-class lived before World War I.

These streetcar suburbs were a high point of American urban design. They had free-standing houses with small front yards and adequate backyards. There were shopping and trolley lines within easy walking distance of homes, with apartments above the shops on the main streets. Stores offered delivery of groceries and other heavy goods. 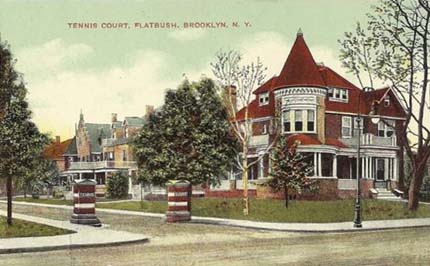 This postcard picture of a streetcar suburb before World War I shows that streetcar suburbs were greener, less congested, quieter, and safer for children than today's automobile-oriented suburbs. Shopping and public transportation were a five-minute walk away.

Compare this model with the suburbs we have in America today. Neighborhoods like the streetcar suburbs would be quieter and safer for children than today's suburbia because they have no cars. They would be more neighborly because people would walk to local shopping and parks and meet their neighbors along the way. They would be healthier because people would get regular exercise from walking and bicycling.

Transportation would be about equally convenient, because shopping, services, and public transit would be within easy walking distance of homes, and because distances would be much shorter in this more compact city.

A City that Tames the Automobile

As a second ideal type, to illustrate the effect of a different limit on automobile use, consider a city with a speed limit of 12 mph to 15 mph for private vehicles, about the same speed a bicycle. This limit would let people use cars for local trips - for example, for hauling groceries home - but people would use higher speed rail transit for longer trips.

Bicycles and small electric vehicles similar to golf carts could travel along with the automobiles in the main traffic lanes. Shopping streets would be quieter and safer for pedestrians than they are in today's cities. Residential streets could make traffic even slower, as the woonerfs in the Netherlands do, so they would be safe places for children to play.

Because private vehicles are slow, public transportation would be used for almost all commuting and regional shopping. Businesses would naturally tend to cluster around transit nodes, because most employees and customers would come by transit. Again, transportation would be about as convenient as in today's cities, because there would be shopping near homes, and because distances would be shorter in this more compact city.

As a third ideal type, consider a city with an even looser limit on automobile use, a speed limit of 25 or 30 miles per hour. If the city had a relatively high-speed commuter rail system, people could all live in houses with two-car garages on quarter-acre lots, as they do in today's suburbia.

But the region as a whole would be very different from suburbia. With no freeways or high-speed arterials, most commuting would shift to rail, so development would tend to cluster around the rail stations. Instead of freeway-oriented regional shopping malls, the city would have mixed-use shopping and office complexes (with plenty of parking) at rail stations – though there would also be some districts zoned to accommodate automobile-oriented big-box shopping.

This model is not at all radical: It is how our cities would have developed after World War II if we had decided to promote suburbanization by building rapid commuter rail systems rather than freeways.

Urban Design and Way of Life

The point of the thought experiment should be clear even from this incomplete summary: These different political choices create cities with different ways of life.

A 30 mile per hour speed limit would promote a way of life that focuses on private satisfactions. People would have houses on large lots and several cars for each family.

A ban on automobiles would promote a way of life that focuses on public goods rather than on private satisfactions. People would live on smaller lots and without automobiles in order to have a city that is quieter, safer, and more neighborly.

Within the framework of this political decision, people can also make individual decisions about how they want to live. These three models assume that people prefer low densities, as many Americans do. The results would be very different if people preferred dense urban neighborhoods, as many Europeans do.

We ignore the human choices underlying any urban design because city planning has not caught up with the immense change in the American economy that occurred during the twentieth century, the change from a scarcity economy to an affluent economy.

In 1900, the average American's income was not much higher than what we now define as the poverty level. Many workers lived in tenements where there were no windows in the inner rooms, where all the families on a floor shared one toilet, and where you put a washtub on the kitchen floor to take a bath.

In 2000, the average American's income was more than seven times as great as it had been a century earlier (after correcting for inflation). Most workers today live in suburban tract homes where each adult needs a car because you drive every time you leave the house - and this expense is an economic burden for many Americans.

In the early twentieth century, it made sense to hand over decision making to planners who had the technical knowledge needed to provide people with basic necessities of a decent life. For example, early city planners developed idealistic proposals for "workers housing" that looked sterile and impersonal but that at least got workers out of the slums and gave each family a bit of sunshine and a private bathroom.

Today, we have far more choice because we are so much wealthier. Workers could plausibly choose to live in comfortable apartments, in row houses, in streetcar suburbs, or in sprawl suburbs. These choices involve trade-offs and decisions about the good life that people should make for themselves. It no longer makes sense to let the planners make the fundamental decisions about how our cities should be built.

Our thinking about planning has begun to change. When city planners built freeways during the 1950s, everyone believed that the decision about whether a freeway was needed was a technical question that the planners should decide by doing studies of projected demand. But when citizens began to oppose freeway construction during the 1960s, they talked about the freeways' effects on the "quality of life." By asking this qualitative question, by asking whether it is good to live in cities built around freeways, they changed the decision about the freeway from a technical question decided by the planners into a political question that should be decided democratically.

This example shows that we can make the fundamental political decisions about what sorts of cities we want to live in if we think about different urban designs in concrete, human terms, if we think about the ways of life that they imply.

This does not mean that we can do without planners. City planners are obviously needed to design the public transportation systems for any of three of the ideal types in our thought experiment - and to design many other details of these cities.

We need to go beyond the anti-freeway and anti-sprawl movements, which just aim at stopping destructive developments, and to take positive political steps to make our cities more livable and more sustainable.

City planners understand the changes that are needed: We should build new public transportation infrastructure with pedestrian-oriented neighborhoods around the stations. City planners also know that needed changes are often blocked by angry NIMBYs.

At the deepest level, the problem is that most people think of themselves as clients of the planners, that their only role in the political process is to demand that the planners provide them with more housing, better neighborhoods, more transportation, easier parking, and more environmental protections.

People need to stop thinking about cities as bundles of technical problems that the planners must solve for them and to start thinking about the different ways that they would live in different types of cities.

People will stop acting as consumers making demands of the planners and will start acting as citizens who can govern themselves, if they think in this concrete way about cities, regions, and the overall economy - if they recognize that urban design helps to determine how they live, and that they could live better by living more simply.

Charles Siegel's most recent book is Unplanning: Livable Cities and Political Choices. He has written articles and books about a variety of subjects, including economic growth, architecture, child care, and the history of philosophy. He is also a political activist who works on local city planning issues in Berkeley, California.