The Agora from Athens to Atlanta: Public Space as Marketplace, Park and Center of Urban Life

The popularity of the agora, or central marketplace, has waxed and waned throughout the centuries. Park designer Richard Light looks back at the history and meaning of the agora from Ancient Greece to today.

The agora, the central market place of Ancient Greece, was 30 acres in size and contained several markets, three stoa, or teaching porches, two theaters, a gymnasium, courthouse and prison, five temples and many sculptures of gods and goddesses. The agora (and its counterpart in Rome, the forum) was also a single place where education, politics, religion, oratory, philosophy, art and athletics flourished. As such it functioned as an integrative center for those activities that were crucial to the Greek way of life and its democracy. In physical terms it was the core of Greek society, and was a place where the sacred and the profane met on a daily basis. 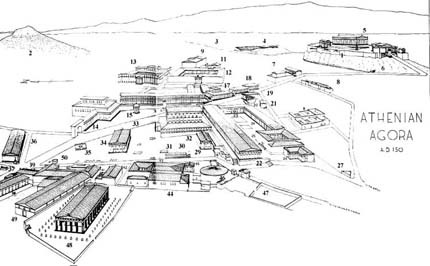 As the Catholic Church ascended during the early Middle Ages, religious spaces and commercial spaces in Europe became separated. The outdoor agoras were relegated to a secular role – continuing to function as markets, often in the squares in front of the churches, and as the location for public executions and other similar events.

With the arrival of the Renaissance in the early thirteenth century, Europe saw the ascent of specific professions: architect, painter, sculptor- all these became recognized and respected and were no longer simply trades. As a result, the craft guilds- woodworkers, masons, cloth makers who dominated the Middle Ages, diminished in importance. Since sculptors, architects, and other professionals did not use the agoras to market their work, these spaces became less important than before.

In the post-Renaissance period, and lasting well into the nineteenth century, the agoras continued their function as public markets and venues for the crafts guilds. However, in the latter part of the nineteenth century and continuing into the twentieth, manufacturing and industry came to dominate European culture. As people moved to the cities to work in factories, the agoras in the smaller towns waned. Those in the larger cities survived, but, partly because time was more limited, they continued to decline. Eventually, they shrank further because many of the consumer goods offered for sale were machine made, which led to the rise of retail stores and mass merchandising. Thus, in this nascent consumer society, agoras were needed less and less.

After World War II, with the advent of supermarkets and home refrigerators and freezers, the agoras contracted even further. By the late 1960s, symbolized best by the departure of the great Les Halles market from Paris to the suburbs in 1969, they became in many cases, a fraction of their former selves.

Unlike urban Europe, the United States developed as an agrarian rather than an urban society. Although there were town squares, which functioned as markets and meeting places, these public spaces never dominated the scene as they had in Europe. There were some agoras in the U.S., however, and they were mainly found in the cities on the East Coast: Places such as Faneuil Hall in Boston, founded in 1742, and Independence Square in Philadelphia, founded in 1856, served as places for public oratory.

In the twentieth century, the American agoras swiftly declined. This was due in some part to long hours required in factories, but there were other reasons for the decline of public urban spaces as well. In the 1930's, the urban agoras decayed because office buildings and highways took up large tracts of public land. By 1939, New York City was building freeways on both sides of Manhattan. At the apogee of industrial culture, Robert Moses, New York Commissioner of Public Works, tried in 1934 to build a freeway through Washington Square Park in lower Manhattan, one of only two sizable parks in that area. He failed in that attempt, but the dam had been opened. After World War II, freeways and then office buildings mushroomed in most large- and medium-sized cities. The net effect was to marginalize not only agoras, but all public spaces and parks. A single slogan summed up the tenor of the times. "What is good for GM is good for America," and what was good for GM and its allies was not to waste land that could be turned into venues for motorcars and commuters.

The tide in America turned in the late 1980's, when agoras, parks, and other public spaces began to broaden their role. Like the ancient agoras, they began to support multiple activities integrated in one place and became more a part of everyday life. Due to the impetus of the Congress for the New Urbanism, founded in 1993, and the Urban Land Institute, founded in 1936, there has arisen a new interest in all public spaces.

As a result, architects and urban planners have rediscovered principles of design for public spaces that served urban planners well, up until the late nineteenth century. In the United States, Portland, Oregon led the way. Since the 1920's, Portland has developed a public park system that is the envy of all other cities in the United States. In the 1970's, the city opened Colonel Tom McCall Riverfront Park, and in 1998 Jamieson Square, both of which can be called true agoras. In total, the city has over 100 public parks. Other cities also have parks of this caliber: Chicago, with Lincoln Park and the newer Millennium Park, and New York with Central Park. Even smaller cities like Grand Rapids, Mich. have created such spaces. The new Millennium Park in Grand Rapids, opened in 2005, will be 1,500 acres by 2014, twice the size of New York's Central Park. In the case of Lincoln Park and Central Park, designed over 100 years ago, each has been updated to meet today's needs.

These modern agoras are not literal recreations of the ancient agora at Athens. However, they share with it the following characteristics: they are public gathering and recreation spaces for all the people of the surrounding region; they serve the hopes and aspirations of the residents (are not just "green spaces" or "sports venues"); they integrate well with the urban design of their locale; they have a natural component that is designed in a pleasing manner, and is of sufficient size to attract the ongoing interest of the citizens; they have several activities in the same place – from farmers markets to music, art and cultural festivals; and they have a religious component, implied if not precisely stated. Agoras have rediscovered their role as the central public space in urban life and community.

Richard Light is principal of Agora Design Partnership. He is a park designer and fine art bronze sculptor who has won numerous design awards. He has designed parks, public spaces and monuments for cities and private organizations ranging from Kalamazoo, Michigan to the Comité Pour le Monument Pour Albert Einstein in Paris, France.

Where Open Streets Are Succeeding

The cities that are making their pandemic-era car-free experiments permanent.

In 2023, will the city’s public spaces be reclaimed by cars, or will pandemic-era interventions lead to permanent change?

Where Have All the Third Spaces Gone?

As businesses shortened their hours during the pandemic, Philadelphia residents found themselves with fewer options for places to spend their evenings.

37 minutes ago - The Urbanist