The Disruption of 'Safer at Home' for L.A.'s Unhoused

As a humble understudy of the amazing metamorphosis occurring across the Hudson River, Hoboken is hoping imitation is our best form of flattery.  An example of that is the pedestrian plaza created late last year by closing a street segment to vehicular traffic and chastised just a bit sarcastically in this previous blog post.  And just a few weeks ago, we did it again by taking an historic Belgian block street spur that has been glutted with angled parking for years and converted the entire space into a de facto intermodal plaza as an extension of the phenomenal Hoboken Terminal that already accommodates five transport modes (Bus, Heavy Rail, Subway, Light Rail, Ferry).  Now, previously overlooked taxis and shuttle buses have a legitimate and appropriately spaced area to operate, and passengers are provided ample queuing areas that do not conflict with the very high pedestrian traffic flows and vehicular traffic in this area.

The response from the community has been excellent.  While some people are uncomfortable with the "new use" of a previously underutilized street segment, most residents with whom we've discussed the changes have praised the new configuration and feel the move activates a quiet dead end into something that much more appropriately reflects the high activities of the area.  Most importantly, an area that has been exclusively used by about forty privately owned automobiles for parking has been opened up to the use of thousands of Hoboken residents and visitors daily, which is an extremely important aspect of our efforts in Hoboken to maximize the use of our limited public spaces, of which streets constitute the largest and most unrealized portion.  See below for a brief photo essay on how we went from one mode (cars) to many on the cheap! 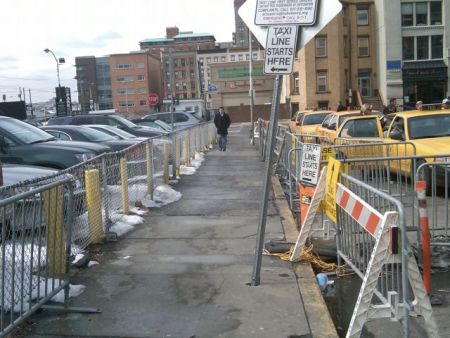 Figure 1. Nowhere to Go But Away: Anyone who has been to Hoboken Terminal or looks at this photo can see that there is room for improvement on the existing taxi stand.  Cramped into a space that accommodates a maximum of nine taxis, operating across three very active crosswalks, and located on an extremely narrow sidewalk in one of the most heavy pedestrian areas of New Jersey (and hence, the country), the need to move was obvious.  Nearby construction that would displace the "staging" of over forty taxis was a convenient impetus to do what was necessary in the midst of extremely heavy pushback from the taxi owners and operators. 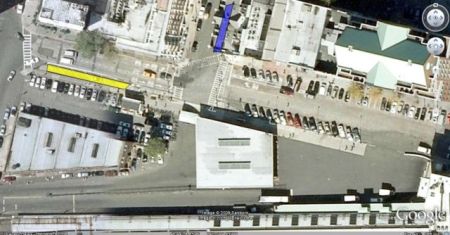 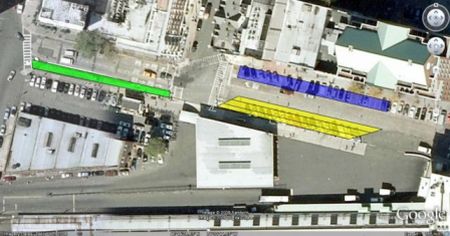 Figures 2 & 3. Existing & Proposed: The yellow and blue in the these two images show the taxis and shuttle bus operations, respectively.  In the existing condition, taxis were squeezed into a narrow space between several major crosswalks and adjacent to a very narrow but heavily trafficked sidewalk.  Shuttle buses double and triple parked in such a haphazard manner that sometimes traffic would be backed up for 2-3 intersections.  The second image shows how the proposed taxi stand slides down the street into a Belgian block dead end that was previously devoted to metered parking (mostly by meter-feeding employees and commuters).  The shuttle buses are given a long, linear strip of curb in front of several businesses where waiting passengers can grab a slice of pizza or cup of coffee.  The former taxi stand is converted to expanded pedestrian space and a passenger pick-up/drop-off area where before there was none.  Pulling taxis and shuttle buses out of the "mix" was seen as a way to dramatically reduce the traffic and congestion experienced by everyone at this location. 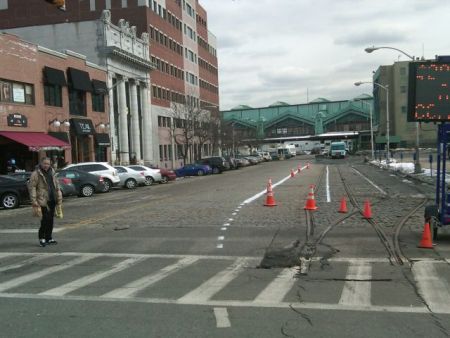 Figure 4. Striping & Signs: With a little bit of creativity and a lot of careful planning, you too can build your very own intermodal facility using just paint and signs (and two weeks of intense coverage by parking enforcement officers to explain the new system to baffled drivers).  In this photo, we're laying down the white lines that demarcate the three rows of the new taxi stand.  Loss of metered parking spaces was justified to the City Council by citing surveys where most metered spaces were occupied by employees who could actually save money by parking in a nearby municipal garage instead of feeding the meter all day (a common problem in most downtowns). 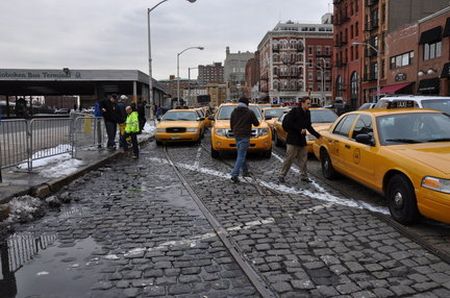 Figure 6. Triple Loading: The idea of the new taxi stand is stolen from loading operations observed at Atlantic City casinos where they load three abreast, thereby tripling the taxi stand's processing rates during peak periods.  Terrible weather during the relocation gave us the unexpected (and uninvited) opportunity to test the effectiveness of the new stand under extremely challenging conditions.  (Note: A dispatcher is recommended to really make this work when it's busy).  Photo courtesy of Joe Shine. 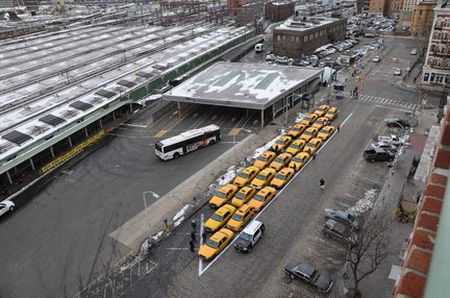 Figure 7. A Paddock of Sorts: After two weeks of tweaking and further introducing shuttle buses to the other side of this street (displacing the parked cars on the right in this image), the taxi drivers are discovering they can get in and out faster than before and are shaking off the "fear of anything new" jitters that initially threatened to stymie the relocation.  Ultimately, owners and drivers were extremely cooperative, local businesses have seen increases in patronage as this quiet dead end was brought to life, and traffic is flowing much better on nearby streets.  Photo courtesy of Joe Shine.

The Disruption of 'Safer at Home' for L.A.'s Unhoused