<p> With the brilliant help of graduates from Hoboken&#39;s <a href="http://www.stevens.edu/">Stevens Institute of Technology</a>, our local community shuttle bus (a.k.a. The Hop, formerly known as The Downtown Crosstown Shuttle) can now be viewed <a href="http://www.hobokennj.org/departments/transportation-parking/the-hop/">live on the city&#39;s website</a> as it cruises along narrow Hoboken city streets from 7:00 AM to 7:00 PM (EST), Monday through Friday.  If you&#39;re not near the internet, try texting “crosstown” to 41411 to get a return text with the location of the bus&#39; whereabouts whenever it&#39;s running, then run down to the corner before you miss it! </p>

With the brilliant help of graduates from Hoboken's Stevens Institute of Technology, our local community shuttle bus (a.k.a. The Hop, formerly known as The Downtown Crosstown Shuttle) can now be viewed live on the city's website as it cruises along narrow Hoboken city streets from 7:00 AM to 7:00 PM (EST), Monday through Friday.  If you're not near the internet, try texting "crosstown" to 41411 to get a return text with the location of the bus' whereabouts whenever it's running, then run down to the corner before you miss it! 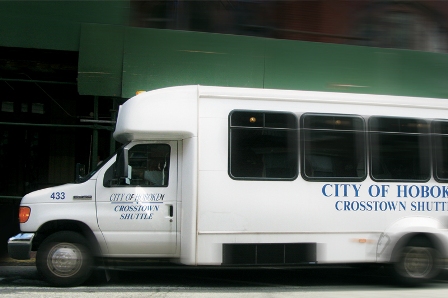 This infusion of technology makes our humble bus attractive to smart phone-tethered younger residents impatient (or illiterate) with static bus schedules, and allows us to confirm that the time-honored timetable is nonetheless accurate for older generations who have come to depend on the bus to get around locally.  The project pieces, assembled and implemented as a volunteer effort by computer-omniscient start-up group gurus at www.parkingmapper.com, totaled less than $500 in materials and about eight weeks of catch-as-catch-can time; they might pimp your ride too if you ask nice!

The technology rivals other surprisingly expensive systems and speaks to the heart of what partnerships between local universities and municipalities are all about.  Open sources such as Linux and OpenStreetMap.org were leveraged to provide needed code guts at no additional cost.  Residents graduate in days from perceiving this as a fun toy to using it as a de rigueuer tool for making the best use of their time (just as how one finally stops staring at the Roomba vacuum cleaner after a few hours and gets on with life sans sweeping).  Minimalists can debate whether a paper schedule in pocket (or in head) is less inconvenient than a text message from the ether; in terms of exploring ways to use ubiquitous technologies to simplify life, this is a success!  As Edie Brickell says, "...religion, is the smile on a dog."

Over the past year, we&#39;ve been guiding the City of Hoboken, NJ towards providing sufficient alternative modes of transportation such that owning a car for a large number of residents becomes more than unattractive, it&#39;s simply not necessary.  The goal is not to tell residents that they can&#39;t own a car, but to make life without a car so easy that every single family in Hoboken can freely choose whether owning a car is what they want to spend their money on.  For those who decide that a daily commute by car is most practical, my job is to make it possible to find a parking space and travel in and out of town without too much friction.  However, for the overwhelming majority of Hobokenites who commute daily on foot, bicycle, or via transit, life without a car should be as