Next Steps for Shrinking Cities: Results of the Planetizen Brainstorm

Bulldoze? Densify? Walk away? There are many ways cities can react to shrinking populations and abandoned neighborhoods. Planetizen readers decide which ways are the best.
July 9, 2009, 9am PDT | Nate Berg
Share Tweet LinkedIn Email Comments

It's hard to think about Detroit these days without picturing empty streets, cracked windows, and chaos -- essentially, a broken city. In fact, if the idea of a "broken city" needed a poster child, Detroit would be high in the running. Between 2000 and 2007, the city lost more than 30,000 people. More than 15,000 homes are currently under bank ownership. More than 3,100 homes were torn down in 2008. 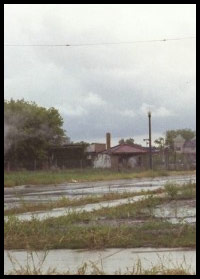 Detroit is clearly in a tough place right now, but it's definitely not alone. The recession and housing market crash have weakened many cities, leaving large sections of town that are virtually abandoned. Empty homes and businesses line what were once living streets but are now ghost neighborhoods with little prospect of coming back to life.

Some say these neighborhoods will never recover, and it's time for cities to cut their losses. And when they say cities should "cut their losses", they're really talking about bulldozers and widespread demolition.

It's a concept based on the experience of Flint, Michigan, a city plagued by post-industrial decline. Officials there began bulldozing large abandoned areas of town and allowing them to "return to nature", creating park and open space. The idea is reportedly gaining some traction, as officials in the Obama administration are considering a study to identify areas within American cities where "back-to-nature" bulldozing may be appropriate.

But some argue that the bulldozer doesn't have to be the only way to deal with these withering places. Recent opeds have argued that bulldozers shouldn't start their engines quite yet. "Obliterating whole blocks and neighborhoods is just another way of giving up past and future," writes Gregory Rodriguez in the Los Angeles Times. "It will only further encourage the decentralization of residents and jobs."

In other words, it may be too soon to count these places out. And even if cities do count them out, things may not turn out the way officials intend.

So what should cities do with their empty and abandoned neighborhoods? We asked the Planetizen community of planners, developers and designers what they thought, and they offered dozens of suggestions and hundreds of votes for the best one.

The variety of responses shows that this is much more than a question of bulldozing or not bulldozing. Some readers suggested that certain parts of abandoned areas should be demolished, but others left for adaptive reuse projects. Some advice was as simple as following the lead of Flint and tearing buildings down, while other suggestions focused on rebuilding the urban core and increasing density.

"It's not a question of shrinking," commented one reader about the top ranked idea. "It's a question of concentration to support regeneration."

But taking advantage of urban space for traditionally non-urban uses was also a popular idea. Four separate suggestions mentioned reusing some of these abandoned spaces for urban agriculture.

The third place suggestion, to "rebuild smart infrastructure, restore nature and rebuild with a zero footprint" was probably the broadest idea. Encompassing more than just a single empty house or abandoned block, this suggestion calls for a new way of thinking about how the city as a whole should work. As one commenter suggests, cities should "rehab the family homes close to the urban core," but farther out "pull down unused structures and roads, and rent the land to eco-farmers."

Others suggest urban change on more of a social level. The second place idea calls for incentives to lure artists and entrepreneurs to declining areas in an effort to revive the local economy. "They will bring not only ideas but eyes on the street to reduce crime and increase livability," one readers suggests. Another reader proposes creating "community currency", the better to retain local wealth.

Overall, the wide variety of suggestions underlines the uncertainty that many cities have about how to react to these changes. They also show that cities don't have to look at empty buildings and declining populations as sure signs of a downfall. In fact, these seemingly unfortunate changes present what may be the best opportunity these cities get to rethink how they work and how they could work better.