Breaking Silos in the City

City government is made up of many individual parts. Though they need to work together, they aren't typically very good at it -- especially in big cities. Recently, an interdepartmental group of city officials in Los Angeles came together to try to improve the way they work together and the way they better their city.

"Department-divided" is how Lillian Burkenheim describes the city of Los Angeles. She's a project manager with the city's Community Redevelopment Agency, and has been frustrated with the compartmentalization of city functions and departments that often keeps them separated. This is a problem not just in L.A., but in other big cities where the sheer size of the place institutionally segregates city officials who regularly need to -- or at least should -- be working together.

"There's no cross-communication," Burkenheim says of the City of L.A. And when it comes to projects that can benefit from inter-departmental collaboration, like creating a pedestrian plaza or updating a street design, the separation can affect the quality of the outcome. "It's very limiting."

This lack of interaction prompted Burkenheim to do something. Working with fellow planners in the city, she devised a plan to pull together officials from some of the departments the CRA works closely with to get everyone on the same strategic page. The result was a series of workshops led by the non-profit Project for Public Spaces that drew in officials from the CRA, department of city planning, department of transportation and the bureau of engineering for what co-organizer Emily Gabel Luddy of the city's Urban Design Studio calls an "Urban Design Academy". Through the concept of placemaking, the workshop series intended to broaden the scope of what each individual department does and recast those separate roles into one holistic vision. 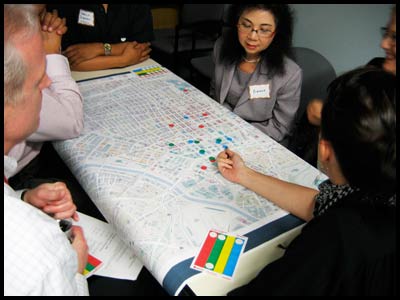 An interdepartmental group of L.A. city officials discuss the good and bad parts of downtown.

"This is a day of hopefully starting to think a little differently about how you do your job," Gabel Luddy told the group during the first workshop session, which was held in late April. About 45 people from the various city departments were in attendance. After the presentations on placemaking from the Project for Public Spaces, participants were split into groups and given the assignment of identifying the five best places in downtown L.A., the five worst, and the place that has the most potential for improvement.

As these groups gathered around maps with colored stickers and highlighters, the conversations got lively. Landscape architects could be heard debating with planners about the quality of public spaces, while transportation officials weighed the quality of the pedestrian environment.

Going from table to table, the discussions about the various places in downtown L.A. were vibrant -- and at times contentious. "I think that space works", one planner said. "It stinks down there", said someone else at another table. "It's completely underutilized," another said.

Among six different groups a few similarities came up as to which were the best and worst places, but there was definitely no consensus about what makes good urban design. Despite the disagreements, the exercise showed that people don't need to be "planners" to think about how spaces could be better planned.

This became crystal clear the week after, when many of the same officials ventured out into the field to observe a place in action. Through the guidance of a street evaluation form provided by the Project for Public Spaces, groups observed and rated the street, sidewalks, buildings and spaces of single city blocks. Combining their individual experience in different aspects related to each block, the groups worked together to craft a prescriptive analysis of the street. But unlike a team of consultants contracted to find a solution, this group of interdisciplinary local officials brought a history of familiarity with the project area.

"We're tapping into the local expertise rather than bringing in someone from out of town who says 'your street needs this,'" said the Project for Public Spaces' Gary Toth, who led one of the street evaluation groups through a section of 11th Street in downtown L.A.

Putting these disparate groups together turned out to be an enlightening experience for some. Carl Mills of the Bureau of Engineering was in a group that at one point was asked to look around the area for phone booths. None were there. He says this simple observation opened his eyes about the small but important details that make up a place – an observation he probably wouldn't have made on the same trip with a group of fellow engineers.

"I noticed things I never saw before," Mills said.

The importance of mixing these groups became increasingly clear to participants as the workshops continued. The exercises underlined the fact that these disparate departments are actually working towards the same goals, albeit through different specific processes and methods. That understanding, some say, will help to forge a better working relationship between the departments.

"Without making that partnership, we cannot do anything effectively," said Borzou Rahimi, a Construction Supervisor at the CRA. "A lot of times the common interest and common intent overcome the differences."

L.A.'s collaborative effort is just a first step, but a major one for city departments that are often separated by city blocks or even miles. The more city officials recognize that their work is aiming towards a common interest, the more they'll be able to coordinate and combine their efforts to create the truly successful projects and places each department strives towards.