A proper bicycle network is
comprised of four basic types of bikeways: bicycle
lanes, bicycle boulevards, shared streets and off-street paths. Although bicycle use is
not common in many American cities, planners and government
officials must acknowledge that such activity is unlikely to increase
without a sufficient bicycle network in place. Cities and towns interested in developing
or expanding their bicycle network must consider plans that
include all four types. Doing so creates a tapestry of options
for the three types of bicyclists and their individual requirements (outlined
in my previous post). Portland, Oregon and Berkeley,
California experience some of the
highest bicycle mode shares in the country precisely because they use a layered
approach. Before continuing, it's important to loosely define each bikeway
type. 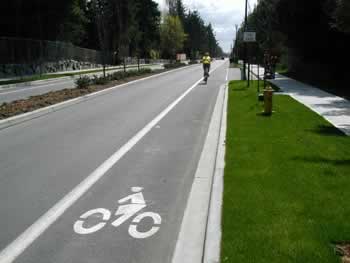 Bicycle lanes are dedicated 4' – 6' wide travel
lanes demarcated by 8" striping, or physical barriers such as bollards.
Regardless, they are most appropriate for medium-speed thoroughfares. To
increase their visibility, they are commonly painted red, blue, or green. 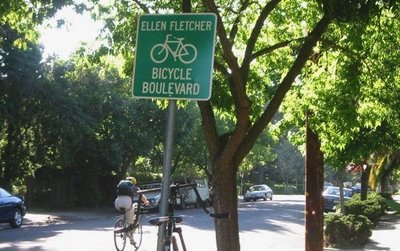 A bicycle
boulevard functions as a preferred through street for bicycles. The
implementation of traffic-calming devices along local streets with low traffic
volumes whenever possible, prioritizes the free-flow of bicycles, and assigns
the right-of-way to the bicyclist at intersections. Again, Portland, Oregon and Berkeley, California
have successfully implemented bicycle boulevards, greatly expanding the appeal of their bicycle network. 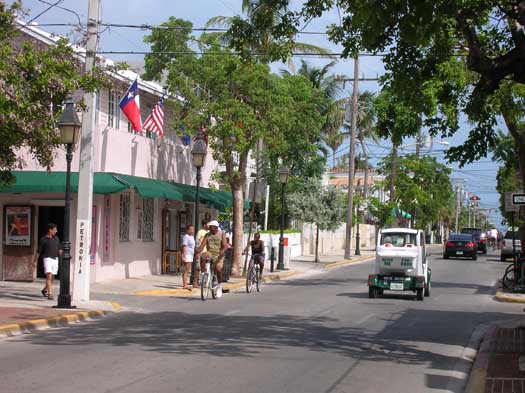 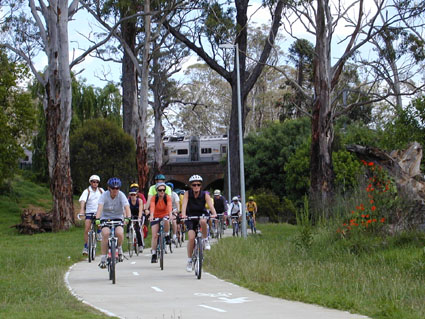 An off-street path may
exist within the road right-of-way or within an independent right-of-way, but is
always physically separated from motorized vehicular traffic. Paths are typically
paved, especially in urban areas, and most often feature dual
direction movement. Although bicycle paths are used for recreation in
areas more rural in character, they are also used for recreation
and commuting in places
that are more urban. For safety reasons, most paths feature
directional signage and a few are even signalized where the bicycle path
intersects with regular thoroughfares.

While not every roadway provides excellent bicycling
conditions, a complete bikeway network should provide efficient regional access.
The first step towards achieving this goal is to map the existing network. This
includes existing facilities and those bicycle "desire lines" where
none are currently present. The network should then be complemented with a new
plan, which aims to expand bicycle facilities and link important destinations
in a contextually appropriate manner.

A good bicycle
network is also supplemented with secure bicycle parking facilities along
important commercial corridors, at transit stops, and near major civic,
educational, and employment centers. When feasible, such destinations should
also be served by shower/changing rooms, which may be facilitated by
building codes that comply with LEED standards, especially at government
and civic buildings. Bike lockers, like those in Ann Arbor,
or bicycle stations such as those in Chicago, Seattle or Santa
Barbara, provide downtown commuters and recreational
riders with secure bicycle storage, showers and repair services. More of these
should be built in urban cores, preferably at transportation nodes
and civic spaces like parks and squares.

Additional on-street
bikeway enhancements include clear signage specifying the distances to major
destinations, wide shoulders, sharrows and bicycle boxes. Still in their early stages, sharrows and bicycle
boxes as well as wide shoulders are being implemented with success and should
be considered as tools capable of producing a finer grain of contextually
appropriate bicycle facilities. Explanations are
below.

Sharrows are an experimental on-pavement
marking of a directional arrow or "chevron," and a bicycle symbol
identical to those seen in bicycle lanes. Sharrows demonstrate that bicyclists
should "take the lane" by directing them into safe, shared-lane
positioning. Studies
have proven that the sharrow effectively reduces bicyclist/motorist conflict
along medium-speed thoroughfares and help bicyclists safely avoid the
door-zone. Sharrows are appropriate wherever travel lanes are too dangerous to
share safely and when bicycle lanes are not feasible due to available street width
or the general character of the street. As such, they are a great tool for
mixed-use pedestrian oriented districts as the continuation of bicycle lanes that
run through those urban areas less saturated with pedestrian activity.
Just as highways should stop before entering the city, so too should bicycle
lanes when entering the most pedestrian-oriented, mixed-use streets.

The bicycle box is an intersection safety
design tool used to prevent bicycle/car collisions, especially those between
drivers turning right and bicyclists traveling straight via a bicycle lane. The
bicycle box guides bicyclists to move left, effectively taking the motor
vehicle travel lane during stop lights. A colored (typically green or blue)
on-pavement marking, this tool is further marked by a white bicycle
stencil located inside the box. During a green light, the colored bicycle lane leading
to and from the intersection reminds motorists and bicyclists to safely
acknowledge the other. Since they typically accelerate faster through
intersections than automobiles, bicyclists will likely be through the
intersection and have returned to the appropriate lane position by the time a
car is ready to overtake him or her. Brooklyn
is among a handful of large American cities successfully supplementing
their bicycle network with bicycle boxes.

Wide
shoulders are
often used by opportunistic bicyclists as a way to claim space, and therefore a
sense of safety and comfort. Typically 4' or more, wide shoulders most often
exist on those thoroughfares which pass through a more rural context, or along
scenic urban thoroughfares, such as a waterside drive. However, some residential
urban thoroughfares without parallel or head-in parking are wide enough to
accommodate bicyclists riding along the shoulder, although narrowing such
streets is preferred. In a more urban context, planners and engineers should generally
not include shoulders when retrofitting existing streets,
as wider streets correlate strongly with higher motor vehicle
speeds and pedestrian unfriendliness.

Having already alluded to
the importance of contextual bicycle planning, I should be more specific. When
designing a bicycle network, it is important to maintain
a holistic understanding of urbanism and what makes active, safe and
pedestrian-oriented neighborhoods. Unfortunately, over the past 60 years,
overt specialization within the planning field has separated planners into
individual silos of expertise where they have lost sight of the larger
picture. Though traffic engineers and many transportation planners are
notorious for their myopic auto-centrism, this does not discount the same
narrow scope respective to alternative transportation advocates, architects or
environmental planners. Although this trend cannot be overcome simply through
the discipline of bikeway planning, I would recommend that those involved
with bicycle facility design assign priority in the
following order:

Recognizing
this hierarchy means that bicycle
facilities should not trump the pedestrian experience. It
also means that a full range of tools must be available so that planners
and designers meet the three types of bicyclists' needs and appropriately respond
to urban context. The four types of bikeways and the additional tools
described above, along with the simple chart below, will help
planners to match thoroughfare type and context with the proper bicycle
facility.

It is
important to also note that urban context varies not only within cities, but also along individual corridors. In Miami,
Northeast 2nd Avenue
provides a perfect example of context transition. While a bicycle lane makes
sense along most of the corridor (one is currently planned), such a
facility should yield to the pedestrian, mixed-use-character of the Design
District in which it bisects. In this situation a seamless transition
from bicycle lane to sharrow provides for a contextually
appropriate and fine-grained facility design solution that maintains the
narrow street width, as well as the precious on-street parallel parking spots coveted by
retailers and restaurants, which the proposed bicycle lane threatens to replace.

A summary
of thoroughfare types, using SmartCode nomenclature is below. Calibration to local conditions will be
required, but the table provides a quick and simple way to think about bicycle
facilities and their appropriate context. One could easily complete a similiar
table for bicycle parking and other such facilities, especially as it relates
to the urban-to-rural transect- a comprehensive planning tool on which the
SmartCode is based.

Because most
cities have so little bicycle infrastructure in place, it is imperative that the
first foray into facility expansion provides useful, safe, contextually
appropriate and connected facilities. In reference to the above, those places
where short term gains can be had should be prioritized. Although bicycle
improvements should be planned efficiently and concurrent with other street
resurfacing, drainage, widening, or dieting projects, engineers and planners
must not rule out the possibility of road construction projects designed
specifically for bicycle facility and infrastructure expansion. This is especially
true for bicycle boulevards, which may make sense along streets that do not
need resurfacing, but still require a detailed level of infrastructure
construction for traffic-calming, signage and pavement markings. Thus,
governments must set aside money for this purpose and advocacy organizations
must work with them to help prioritize the projects that carry the most merit.

Putting
these priorities in place will help municipalities avoid a disconnected, unsafe
and relatively useless system.

Rome was not built in a day, and neither
were the world's most progressive bikeway systems. Indeed, did you know that in
the 1950's Copenhagen
was well on its way to becoming as autocentric as any American city? It was. To avoid such a disaster, planners, government officials and citizens shifted priorities and began slowly replacing auto-oriented infrastructure
with transit and bicycle infrastructure. To their credit, Copenhagen is now the most advanced bicycle
city in the world. Your city may not
be the next Copenhagen just yet, but with the right approach it may be the next Portland.

All the French Prairie Bridge plan needs is a final design. Eventually this car-free bridge will provide a key link in a 1,000-mile network of paths and trails.