The Persistence of Bad Ideas, Part 1: The Devil Strip

(Prefatory musing: As the title implies, this is Part 1 in a series. I haven't yet mapped out any of the other parts, but considering the boundless errata that clutter American cities, I anticipate little trouble finding objectionables to raise my ire next time my monthly deadline approaches. I welcome my fellow Interchangers to follow suit.)

(Prefatory musing: As the title implies, this is Part 1 in a series. I haven't yet mapped out any of the other parts, but considering the boundless errata that clutter American cities, I anticipate little trouble finding objectionables to raise my ire next time my monthly deadline approaches. I welcome my fellow Interchangers to follow suit.)

People often accuse me of being a negative person, reveling in misfortune and criticism. But they have it all wrong. My optimism springs from my ability to tolerate, and even thrive admid inanity. Otherwise, I would not live in an American city. I could spend all day wandering around and wondering why things got this way and how solutions might arise. Nothing fascinates me so much as the proumgation of bad ideas--and the reluctance of otherwise rational people to combat them with all their might.

I imagine that the planner who first decided that pedestrians and buildings needed protection from the street had his heart in the right place--and thus emerged the "Devil strip." Though the name is unfortunate both for its lack of originality and its evokation of clear heels (not to mention its apparant provenance of Northern Ohio), the derogation is well earned.

Los Angeles, my city of infinite flaws, is lousy with them. Every dingbat apartment and erstwhile suburban tract has its very own piece of the Frontier out beyond the entryway, beckoning indecorous dogs and wayward sofas and all other manner of trash to take up residence where neither property rights nor the law of the land prevails. The result is a quirk of planning that confers no benefits on anyone. It makes no one safer. It makes nothing prettier. And it makes no one richer.

In all my years of living on a busy Westside street, neither Hummer nor Lexus nor Prius has ever tried to make acquaintance with my sidewalk, and even so, it would have to go through the phalanx of cars that are always parked streetside. Cars are not panzer divisions, and three feet of grass is not the Maginot Line.

Perhaps in renderings the Devil strip lends a pleasing spot of green to the urban thoroughfare and keeps those evil, forboding buildings at bay. I think of New York and Paris and London (which I will invoke as often as possible for as long as this blog lives -- why did planners toil through the 20th century as if cities hadn't been perfected 100 years earlier?), I think of how the streets and parked cars cower at the forboding buildings that might, absent that tiny fairway, pounce on them at a moment's notice. Oh. Except they don't. 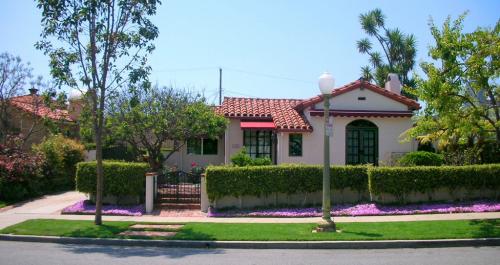 Time and again, throughout the world, the landscapes that humans hew to most dearly all entail an element that has never made its want on to a planner's spreadsheet. Above all else, people like, for lack of a better description, to feel cozy. Indoors y'all can get cozy however you want--ain't none of my business. But outdoors, cozyness stems from elements of medium height providing a cieling under which we may roam. Too-short buildings spaced too far away from each other create the sense of agoraphobia that plagues Americans in ways that most of us don't understand. Just go to the Grove or Greenwich Village if you don't agree. In those places, buildings do not shy away from the street but rather nestle up next to it creating distinct but connected spaces from interior to stoop to sidewalk to motorway. (More on setbacks and street trees some other time.) It just makes me think that whichever planner invented our dear Devil strip had no capacity for pleasure and no love for cities.

But let's get down to brass tacks: In America, the last word rests on finances, so let's see how hell's .0034 acres looks on the ledger. Your childhood two-bedroom home in West L.A. where mom, dad, and the kids squeezed into a 1,600-foot house on a 12,000-foot lot is going for about $900,000 now for a teardown, so the land is worth maybe $75 per foot. The city of Los Angeles (you can do the math for anyplace else; the principle still applies) has 13,000 curb-miles of streets. Even if, say only 10 percent of its streets are so afflicted and of that 10 percent, half aren't so perfectly manicured that we couldn't possibly do without them, then fully 10.3 million square feet of Los Angeles--today worth north of $500 million are going to waste. To put it another way, dogs might as well releive themselves on their owners' Persian rugs, because they're cheaper than than any stretch of grass.

Of course, none of this matters. At least we can raze ugly buildings and sometimes even bury rusted highways. But we can't sell 40'x3 ' lots, and we can't otherwise make Devil strips go away and scootch the city's 13,000 dimensions in accordingly, as if projecting the city on to a smaller-scale map. If we could, the city would be more dense without loss of residential space or lane-miles. Riverside wouldn't be nearly such a long commute, and West Hollywood woudn't exist because Hollywood itself would have moved more, well, west. At best, we could rename it, or perhaps organize a nonprofit to plant rows of daffodils.

Like so many other planning mistakes cast in the media of concrete and asphalt, the Devil strip will forever remind us of the sins that planning can commit. If I had a soul, at least I wouldn't have to go very far to sell it.

APA-Texas Acknowledges the Great Places of the Lone Star State

There are a lot of great places to celebrate in Texas, and the state chapter of the American Planning Association is in the second year of a program that calls attention to the role of planners in making them happen.

The Importance of Quality Streetscapes

This piece from Next American City looks at plans to dramatically rework streetscapes in Boston, and cheers the effort.

A Car-Free Avenue Grows in Brooklyn