Can The U.S. Learn From The Slow City Movement?

With its emphasis on good food, sustainable living, and local community, the Slow City movement is spreading across Europe. But what potential is there for the movement to make the jump across the Atlantic?
October 23, 2006, 7am PDT | Heike Mayer, Paul L. Knox
Share Tweet LinkedIn Email Comments

Living in the United States as a European, you have to get used to a fast pace of life: The check at the restaurant is served quicker than the dessert, the hamburger at the drive-through is handed out faster than you can pay, the bagged organic lettuce takes only seconds to serve, and the enormous cappuccino, conveniently packaged in a paper cup, has a sleeve so that one can carry it while rushing to the next meeting. Countless other examples show how the convenience of the American way of life accelerates the pace of everyday activities. While some enjoy the "on the go" lifestyle, others argue that it diminishes quality of life.

In Europe, some of these trends have taken a hold as well. However, the developments on the other side of the Atlantic have sparked two counter movements – the Slow Food and Slow City movements. The goals of both of these movements are to resist the cultural and economic homogenization and standardization of McDonalds, KFC, Wal-Mart and other icons of globalization.

The Slow Food movement was started in reaction to the announcement of plans to open a McDonald's restaurant in the Piazza di Spagna in the heart of Rome in 1986. Italian journalist and food writer Carlo Petrini was the founder of the movement – its philosophy rooted in preserving the social, economic, and cultural aspects of food production and consumption. To date, the movement has more than 110,000 members in 83 countries.

The Slow City movement was started in 1999 in Italy, when the mayors of Greve-in-Chianti, Orvieto, Bra, and Positano met to define the attributes that might identify a Slow City. At their founding meeting in Orvieto, the four mayors committed themselves to a series of principles that included working toward calmer and less polluted physical environments, conserving local aesthetic traditions, and fostering local crafts, produce, and cuisine. They also pledged to use technology to create healthier environments, to make citizens aware of the value of more leisurely rhythms to life, and to share their experience in seeking administrative solutions for better living. The goal is to foster the development of places that enjoy a robust vitality based on good food, healthy environments, sustainable economies, and traditional rhythms of community life.

Slow Cities must comply with a 54-point Charter that outlines the goals of the movement. To be eligible for membership, candidate cities must have no more than 50,000 residents and must pledge to work towards implementing a range of programs from the promotion of organic agriculture, the banning of genetically modified foods and organisms, urban revitalization and historic preservation, alternative energy systems, preservation of local tradition and heritage, signage and light regulations, to building awareness of the local citizenry for the Slow City goals.

Since its founding, the movement has grown and spread across the borders of Italy, and more than 65 cities have been certified so far. Towns in Germany (Waldkirch, Hersbruck, Schwarzenbruck, and Überlingen), Norway (Levanger and Sokndal), and the United Kingdom (Ludlow, Aylsham, and Diss) are now part of the movement as well. More than 300 other towns from around the world have inquired about joining, and existing certified Slow Cities enjoy a steady stream of local and international visitors interested in the movement.

The movement forms an international network in which towns exchange ideas and best cases. Each Slow City implements the philosophies of the movement in different ways. Chiavenna, a Slow City in the Italian Alps, for example, is known for its efforts to preserve almost extinct food products such as the Violino, a cured goat ham who gains its distinct flavors from aging in the geographically distinct caves of the region. The Italian town Orvieto is a pioneer in alternative transportation and as the founder of the Hydrogen City Charter plays an important role in promoting regenerative energies. The farmers in the German town of Überlingen were the first to ban genetically modified seeds and organism. Hersbruck and Waldkirch in Germany have innovative programs that connect local farmers with restaurants and they have prominent farmers markets. 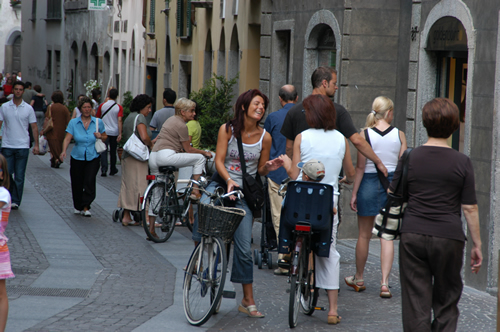 Chiavenna is a Slow City located at the foot of the Italian Alps. Especially on a Saturday, residents and tourists enjoy strolling and chatting in the streets of the old town.

What we find most interesting about this movement is that even though the dynamics of globalization are affecting cities and regions, urban planners, mayors, and citizens of small towns are taking action to resist processes of standardization and homogenization. Slow Cities are dedicated to community economic development efforts that focus on the unique attributes of a place such as small businesses, locally owned restaurants, farmers markets, and socially responsible enterprises. Membership in the movement is often initiated and driven by the mayor, city council members, and the local business sector. Over time, strong networks have formed that not only include those who initiated the Slow City certification, but also citizens, non-profit groups, and civic organizations.

In Germany, for example, the Slow City philosophy is being recognized increasingly as an alternative urban development vision and even larger cities are taking note of it in their efforts to do commercial revitalization. It is also important to note that Slow Cities could too easily be misinterpreted as regressive, isolationist, or backward communities. This is far from being true. Slow Cities want to be at the forefront of cutting-edge urban planning ideas, technology and innovation. They are not against locating a McDonald's, but rather hope that through their efforts the citizens will become educated consumers who are aware of the local choices and option for getting fresh, healthly and tasty meals. Slow Cities want to be eventful places where local traditions are celebrated and mixed with cosmopolitan influences. Unlike the slow-growth or no-growth movements in the United States, Slow Cities are interested in growing, but to them what matters are the qualitative aspects of growth and development.

While the Slow City movement is gaining ground in Europe, could the movement spread to the United States, a country where the urban development mantra has been more about being fast rather than slow? We think yes.

As Europeans, it is exciting to live in the United States at this point in time because this fast-paced society is opening up to ideas of slowness. While the United States is a more fast-paced society, there are a number of examples that you can point to that indicate an openness for the idea of slowness. The number of farmers markets have increased dramatically and the options to buy organic food are bountiful. Urban design has become more concerned about placemaking and human interactions. Green building designs, sustainable urban development, growth management, and other measures to contribute to a greener environment are becoming more commonplace. Local entrepreneurship has become a key driver of urban economies and adds diversity to our main streets.

Most of these examples are rooted in grass-roots efforts. However, the first Slow City in the United States will need to have local leaders willing to be pioneers and promote a comprehensive philosophy. And while elected officials will likely be a big part of such an effort, city planners certainly have a role in helping to bring about interest in the movement.