Planners are increasingly using social media for public engagement. How can you analyze what people are saying? NodeXL is an easy to use free tool for scraping and analyzing social media. I use this tool to report from the APA National Conference. Stephanie Shipp / The First Solar building represented the 2016 APA Conference with a system of louvers that can be used to spell out words.

Every year I report on Twitter activity at the American Planning Association National Conference. With thousands of planners descending on Phoenix, Arizona this weekend, the #APA16 hashtag is already starting to heat up. Throughout the conference myself, @EvansCowley, and @p18holland will be scraping everything that participants tweet about from the conference. In this blog, Patrick Holland and I share how easy it is to scrape and analyze social media.

How can I scrape? I use an Excel plugin called NodeXL. NodeXL has a free and a paid version. Included here is part of the free version. NodeXL allows you to scrape social media and also allows for visualization of the data.

After you have downloaded NodeXL, you can get started. 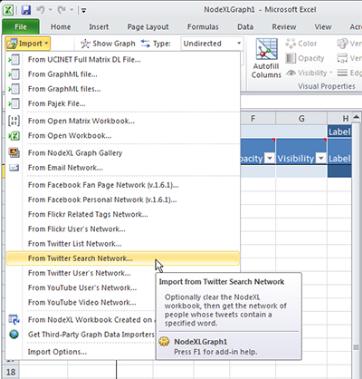 Select the NodeXL tab in the excel spreadsheet. Choose import—then the social media network you would like to analyze. We are using Twitter for this conference, but options for Facebook, YouTube, and Flicker are also available. Once "From Twitter Search Network" has been selected you have the option to "Search for tweets that match this query." Attendees at this conference will be tweeting using the hashtag #APA16 so this is the query we want to match. You can also search for tweets associated with a particular user or keywords. The free version will limit you to 2,000 tweets at a time. In our case, we are scraping using NodeXL each day to ensure we don’t miss any tweets.

NodeXL imports the social media data onto five separate sheets in Excel. One feature I will highlight is if you select an individual tweet (known as a vertex) on the graph, you can see the interactions people had with that tweet. Pre-conference, people showed particular interest in retweeting and favoriting tweets about technology. The most popular tweet as of April 1st was "@medialab: On 4/3, @MITCities presents its CityScope urban planning/simulation tools at #apa16 http://mitsha.re/ZTl6H".

Once you have imported your scraped data you will find that NodeXL is quite similar to using your regular Excel spreadsheets. Using NodeXL, you will see who sent each tweet, the time of the tweet, whether the tweet was mentioned by other people, any links included in the tweets, and how connected users are to each other. You will be able to create graphs, filter data, and analyze to your hearts content. For example, in the case of @medialab's tweet on simulation tools was retweeted 31 times and favorited 59 times. We can see this was retweeted by @MeagBooth and favorited by @mysidewalkHQ.

Those at the conference: be sure to use the #APA16 hashtag, and stay tuned for the results of this analysis at the end of the conference.

Trends from the APA 2015 Conference

Twitter is changing, not in the way Elon Musk wants it to, but it’s still perhaps the most useful social media platform for planners looking for education and engagement.

A recent study by the Transit app reveals which communications methods are the most and least effective at reaching demographic groups representative of transit riders.

54 minutes ago - The Wall Street Journal