A Buffer is Better

What's the best street design to keep bicyclists safely out of the door zone? A buffered bike lane beats a conventional bike lane or "wide curb lane" according to a recent study published in TRB, based on observations in Chicago and Cambridge, Mass.
August 1, 2014, 8am PDT | Irvin Dawid
Share Tweet LinkedIn Email Comments

"Dooring", whereby the bicyclist rides too close to a parked vehicle and becomes vulnerable to crashing should a car door be flung open, can be avoided by biking a safe four feet away from the parked vehicle, but that's easier said than done, particularly on narrow "curb" lanes. But new research shows that even when riding in standard bikes lanes or wide curb lanes, the vast majority of cyclists continue to bike in the door zone.

"A wide curb lane is the traffic lane next to the curb (the right most lane) which is extra wide so a motorist can safely pass a bicyclist without having to change lanes. There is no line painted on the street separating motorists from the bicyclists. [Image and text courtesy of Bike Madison, Wis.]"

The study [PDF] by the National Cooperative Highway Research Program (NCHRP) of the Transportation Research Board (TRB) "concludes that wider but un-buffered bike lanes aren’t necessarily better than narrower lanes in encouraging bicyclists to ride outside the door zone," writes Steven Vance.

A bar graph showing various widths of bike lanes, from four to six feet, reveals that less than 10 percent of cyclists rode outside of the door zone according to observations on Clark St., Chicago. However, with a two foot buffered striped zone separating the bike lane from the parked cars, the number of bicyclists riding safely jumped to 40 percent. Presumably the percentage would be greater with a wider buffer lane. 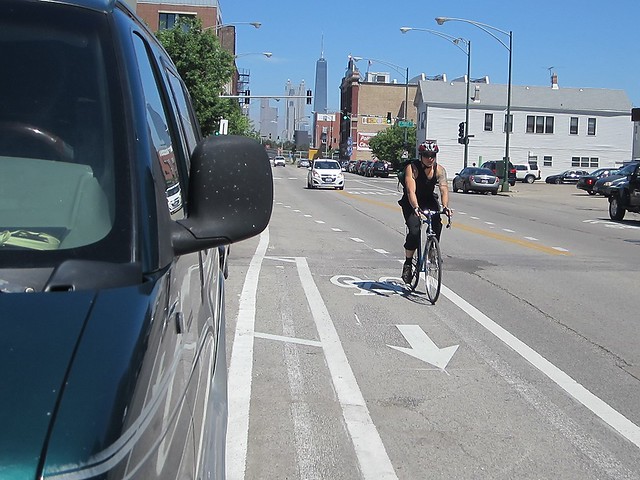 A buffered bike lane does a better job of encouraging bicyclists to ride outside the door zone than a wide bike lane. Photo: John Greenfield

"Chicago has been installing protected and buffered bike lanes across the city, and adding buffers to many conventional lanes," writes Vance.

As the NACTO definition indicates, the buffer can also be placed between the curb lane and the bike lane, in lieu of or in addition to the parking lane, as shown in this Chicago photo, also by John Greenfield. 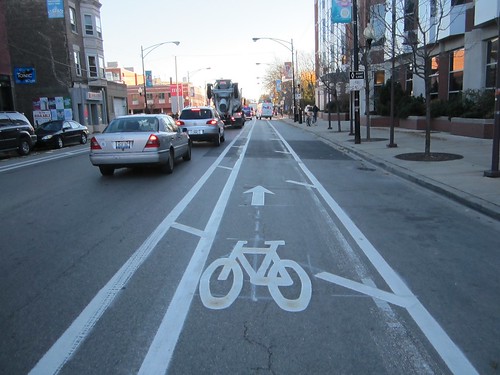 Full Story:
Study: To Keep Bicyclists Outside the Door Zone, You Need a Buffer
Published on Tuesday, July 29, 2014 in Chi.Streetsblog