The Challenges of Re:Coding L.A.

A comprehensive zoning rewrite is a complex undertaking for any city. But for one that’s seeking to evolve its land use and transportation patterns, and is as physically and demographically diverse as L.A., a unique set of challenges has emerged. Los Angeles is the second largest city in the U.S., an economic and cultural hub with global significance, and home to one of the nation’s most outdated and convoluted zoning codes. When the current zoning code for the city was written in 1946, Harry Truman was president, World War II had just ended, and the population of the city was just under 2 million (roughly half what it is today). The code at that time was a manageable document of 84 pages, and was appropriate for the relative simplicity of the city it was responsible for regulating. 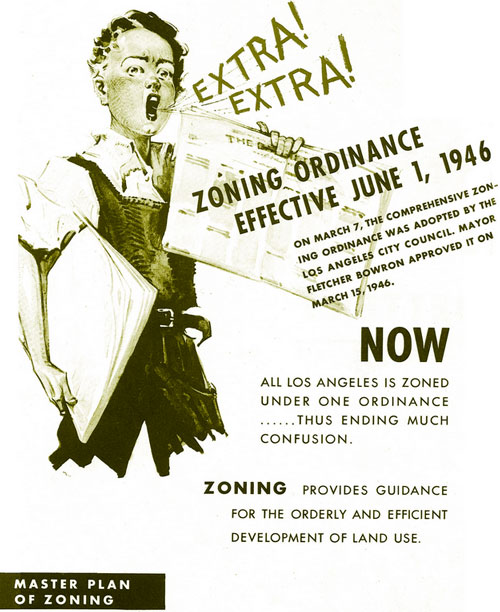 Over the next 57 years, L.A.’s population more than doubled, and now sits at almost 4 million inhabitants living on almost 500 square miles of land. During this period, entire neighborhoods have completely transformed both demographically and physically, the hubs of commerce and activity have shifted multiple times, and residents from 1946 Los Angeles would scarcely recognize the current city.

In an attempt to manage the rapidly changing city, public officials tacked on layers of new plans, overlays, and property-specific development limitations to keep up with market trends and community needs. As a result, L.A.’s zoning code grew from 84 pages in 1946 to over 600 pages now. Over 60 percent of the city’s land is covered by special overlays and site-specific designations today. These amendments to a particular parcel of land have become the norm, rather than the exception. As a result, development under the zoning code is now a challenging process, and routinely confuses developers and planners, as well as the general public.

In response, the City of Los Angeles is undertaking a 5-year, $5 million project to completely rewrite the zoning code (see www.recode.la for additional details). There are numerous goals of the re:code project, including improved clarity, procedural streamlining, alignment with the City’s plans, attracting investment, and improving the quality of life for all Angelenos. Designed to function as an interactive document, the new code will be easily accessible on-line by any interested viewer.

Any major city seeking to revise land use regulations that are more than a half-century old is embarking on a massive undertaking. But for a city that’s seeking to evolve its land use and transportation patterns, and is as physically and demographically diverse as Los Angeles, a unique set of challenges has emerged. Those listed below are based on our initial visits, and do not represent any deep analysis by the consultant team. A critique of the existing regulations (what is working? what is broken?) is due out to the public just after the first of the year.

Challenge #1: A City of Cities

Los Angeles is a city made up of a variety of communities that function almost like cities within a city (perhaps we should blame the postal service for their naming conventions?). The land area and population make it an enormous challenge to regulate. There are 95 city-recognized neighborhood groups, 35 separate Community Plans (making up the land use element of the General Plan), and it requires 7 Area Planning Commissions to handle development approvals across the city. Our code drafting mantra has always been “the right rules in the right places,” and applying this to such a large land area with so many diverse communities will be difficult. 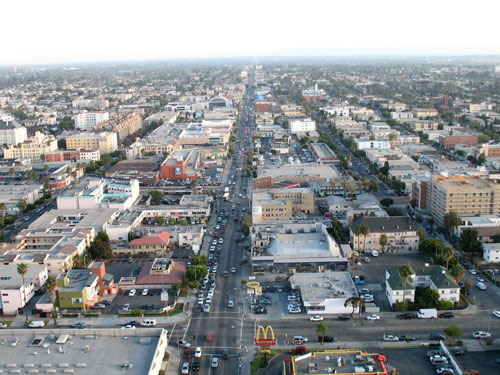 Reviewing existing plans to determine where the City intends to allow transformative change versus incremental change is a significant task. Replacing existing “one size fits all” approaches, and ensuring that new zoning (especially height and floor area allocations) doesn’t entice developers to alter the character of places that the community values will be a constant battle. Maintaining distinct neighborhoods, providing opportunities for leveling the playing field between large-scale development and small landowners, offering opportunities for local entrepreneurs to create their own businesses – all of these will require a fine-grained approach to zoning. And yet, there is a limited timeline for the new zoning: downtown within 2 years, citywide within 5 years. The team cannot get bogged down in the “paralysis of analysis” that affects so many plan implementation projects.

Though Los Angeles is often accused of sprawling, according to the US Census Bureau, the city boasts almost 25,000 persons per square mile in the metropolitan area, second among American cities in density to New York City. No matter how today’s development pattern is described, the conversion of auto-oriented development into walkable urban centers is desired community-wide. L.A. is working hard to manage its intense love/hate relationship with the automobile by improving access for cyclists and pedestrians throughout the city. The area’s massive investment in public transportation improvements (including continuing improvements funded through Measure R: the Westside subway extension, the Expo Line, and the Regional Connector) will change the face of L.A. once again, concentrating development activity along rail and bus lines extending throughout the City. The opportunity for jobs near housing is strengthened, reducing the need for vehicles miles traveled by commuters. Linking land use to transportation by offering zoning that supports this massive investment is critical. Under-building areas served by transit generates lost opportunities for density, and increases pressure on the remainder of the community to accommodate new residents. 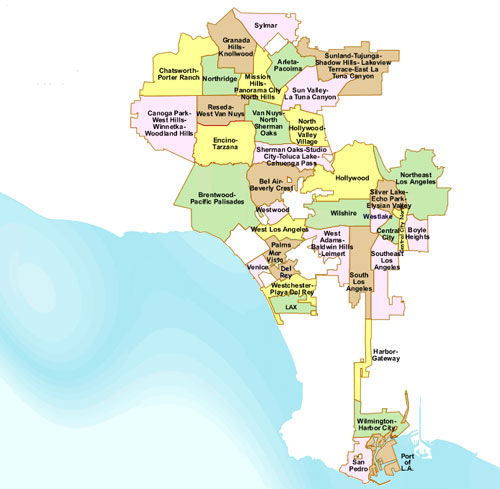 California provides a unique model of planning and plan implementation. Los Angeles has a General Plan (with an embedded Framework Plan which establishes overall community intensities), 35 Community Plans (which provide local land use), and numerous Specific Plans (which act like planning and zoning combined). This toolkit, enabled by the state, leaves many planners, citizens and developers confused as to where planning ends and zoning begins. Community Plans often contain standards for new development (such as buffers, allowed uses, etc.). Specific Plans often contain both standards (measurable elements) and guidelines (guidance applied using discretion). This leads to confusion regarding the authority for regulation, and lots of legal action. And many of these plans are decades old (and perhaps out of date). Even when the community, planners and developers all agree on the degree of change desired, and plan for it, it is difficult to implement with the existing confusing, conflicting regulatory tools. The provision of a usable, accessible, consistent framework for plan implementation must be one of the key outcomes of this zoning rewrite.

A Toolbox for Coding Places

Rewriting L.A.’s zoning code will require public input from a wide range of the city's stakeholders including residents, property owners, businesses, and even developers. Finding common ground and developing a zoning code that reflects the needs of the diverse array of Angelenos presents a challenge, but also highlights the strengths of the City. In the end, new zoning for L.A. must take the form of a planner’s toolbox for creating great places, supporting transit, and solidifying the quality of life across all of the city’s neighborhoods.

Lee D. Einsweiler is a one of the founders of Code Studio, an urban planning consulting firm from Austin, Texas, specializing in zoning, subdivision and form-based code drafting throughout the country. Code Studio is the lead contractor on the Los Angeles code update.

In addition to a contemporary vision for Downtown, the plan debuts a new approach to zoning that could help transform the entire city.

Op-Ed: It’s Long Past Time for Planning Reform in L.A.

Another corruption scandal involving a Los Angeles city councilmember highlights the urgent need for major planning changes in the city.

L.A.'s Crackdown on McMansions Hasn't Stopped Them from Going Up

Legislation to stop construction of McMansions is being undermined by a zoning loophole.