The Smart Math of Mixed-Use Development

The wisdom of man never yet contrived a system of taxation that would operate with perfect equality. -- Andrew Jackson

Asheville, North Carolina -- like many cities and towns around the country -- is hurting financially.

It's not that Asheville is some kind of deserted ghost town. Rather, it's a picturesque mountain city with a population of about 83,000 that draws tourists from all over the world, especially during the leaf-peeping season. But it's also a city that appeals to its residents, who revel in strolling about a true walkable downtown chock-full of restaurants and retail shops featuring locally grown and crafted products. Downtown is not only one of Asheville's main draws; it also serves as a major driver in helping the city overcome its budgetary doldrums.

Most of us – city planners, elected officials, business owners, voters, and the like – understand that the city brings in more tax revenue when people shop and eat out more. However, we often overlook the scale of the property tax payoff for encouraging dense mixed-use development.

Many policy decisions seem to create incentives for businesses and property developers to expand just about anywhere, without regard for the types of buildings they are erecting. In this article, I argue that the best return on investment for the public coffers comes when smart and sustainable development occurs downtown.

We'll use the city of Asheville as an example. Asheville realizes an astounding +800 percent greater return on downtown mixed-use development projects on a per acre basis compared to when ground is broken near the city limits for a large single-use development like a Super Walmart. A typical acre of mixed-use downtown Asheville yields $360,000 more in tax revenue to city government than an acre of strip malls or big box stores. 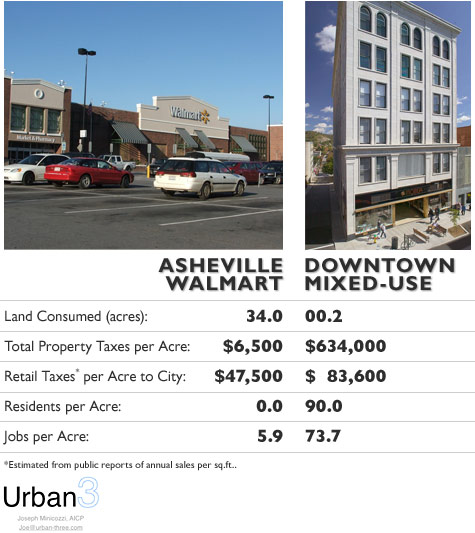 If you were a mayor or city councillor facing a budget crisis, this comparison should serve as an eye-opener, both in terms of your policies and your development priorities. The comparison should also get you thinking about not just how you could encourage more downtown development, but also what kind of development could increase the value of buildings in the surrounding neighborhoods.

It's not just officials in Asheville who should be asking these questions. In the growing number of diverse cities where we have studied this same equation (such as Billings, MT, Petaluma, CA, and Sarasota, FL) we've found that the same principle applies: downtown pays. It's simple math.

The more valuable downtown properties become, the more revenue the city can generate to address its budget gaps, while also serving the best interests of its citizens. Unfortunately, our public officials may not always make their decisions with full knowledge of the trade-offs. 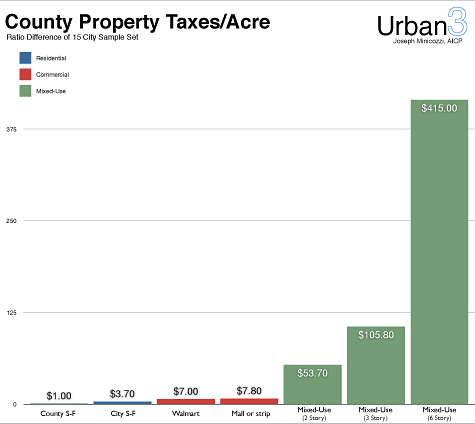 Consider the story of how Public Interest Projects (PIP), a for-profit development company founded in 1990, first came to uncover this economic inequality.

A few years ago, PIP was looking to develop several parcels in a neglected section of downtown Asheville, just off the main core. At the time, it was filled with decaying auto shops, warehouses and semi-industrial space. In other words, it was ripe for mixed-use redevelopment. Unfortunately, while we saw visions of rehabbed living spaces intermixed with retail and office space, the leaders of Buncombe County had other ideas.

In close proximity to the parcels PIP was considering, the county owned a 1.7-acre parcel upon which leaders first announced plans to build a new jail, then, as an alternative, a 24 hour center for emergency vehicles. While few could argue that the community as a whole would benefit from the addition of such facilities, the county's plan to plunk one of them right in the middle of an area so ripe for re-development didn't make much sense to us. Although we weren't on the same page as our county leaders, that didn't stop us from trying to get them to see things our way.

Subsequently, we embarked on a comparative analysis of the impact of different development types and scales on the county's tax rolls as a way to demonstrate the comparable benefits of mixed-use development versus the facilities they we considering. We tried to show them the money.

To do that, we set about analyzing various properties within our community to come up with an estimate of what kind of infill development would be feasible for the county's site. What we found was striking. If the county continued with its plans for building the more objectionable uses, the loss of this property's tax base plus the detrimental effect on the surrounding property's development potential could actually result in a net loss of more than $1 million each year in property tax revenue for local government. That information got the County's attention and good sense prevailed.

Upon realizing that this equation had broader implication, we began applying the same analysis to other key Asheville landmarks. Our next test case involved a comparison of a high-visibility shopping mall located just outside of downtown with a historic downtown building, dubbed the Old Penney's building, which we had restored into a six-story mixed-use structure. Once we ran the numbers, just as before, the results were dramatic. Whereas the mall, considered one of the county's biggest revenue generators, yielded $8,000 an acre in annual County property tax, the downtown building's yield was $250,000 per acre in County property tax.

It's easy to see how you might now be scratching your head. How can you compare a mall with a building? Is that really comparing apples to apples? The point is that we have been perpetuating an error when it comes to how we think about real estate. Our mistake has been looking at the overall value of a development project rather than its per unit productivity. Especially relevant in these times of limited public means, every city should be thinking long and hard about encouraging, and not accidentally discouraging, the property tax bonus that comes with mixed-use urbanism. Put simply, density gets far more bang for its buck.

For comparison, let's consider an everyday example of measuring economic value. When we buy our cars, do we make our buying decisions based on the vehicle's miles-per-tank rating? If we did, we'd all be driving Ford F-150 Lariats that get, on average, 648 miles per tank versus a Prius, which boasts a modest 571 miles per tank. However when we look at the traditional metric for comparison -- how many miles-per-gallon each vehicle gets -- the value statement changes. The Lariat achieves a mere 13 miles- per-gallon while the Prius cruises along at 51 MPG. And, since you spend less to fill up the Prius, at today's gas prices it covers 15,000 miles/year at $3,000 less the annual cost ($4,038/$1,029 respectively). We rank the value of our cars this way because we all know the price of a gallon of fuel. Why wouldn't we do the same with our land? Shouldn't we value the consumption of our land the way we value a gallon of gas? After all, an acre of land is far more expensive than a gallon of gas.

The flaw of our current property tax system is that when it comes to assessing how much a property owner owes, we place very little value on the land beneath a building as compared to the building itself. Compounding that issue is the fact that if you construct a building without innovative architecture or sustainable materials, you actually benefit by lower tax value. The combination of these two factors creates a disincentive for good architecture. The result is that the community loses, both in terms of the property tax it collects and the long-term legacy of cheap single-use buildings. In basic terms, we've created tax breaks to construct disposable buildings, and there's nothing smart about that kind of growth.

What can we do about it? Moses did not come down from the mountaintop to deliver our current property tax policy on stone tablets. It's just another rule we impose upon ourselves. And if we recognize that this policy is harming us in some way, it makes sense to change it. We simply cannot afford how the current system creates incentives for suburban sprawl – which is unsustainable both environmentally and -- as I hope I have shown -- financially. Communities across the United States are going broke, and we can rightly look to our municipal finance systems and our failure to fully appreciate the payoff for density as a big part of the cause. Let's all do the math so we can make some positive changes in the system because, in the end, downtown pays.