Shared streets -- the idea that pedestrians, bikes and cars can all navigate together in the same space -- is a fundamental rethinking of the underlying philosophy related to the design and operation of transportation facilities, write Norman W. Garrick and James G. Hanley.
December 16, 2010, 10am PST | Norman Garrick, James G. Hanley
Share Tweet LinkedIn Email Comments

Before he died in 2008, the great Dutch street designer and engineer, Hans Monderman, re-introduced to the world the concept of shared spaces as the appropriate basis for designing urban streets. Shared space is based on the idea of self enforcing use of public spaces by different types of users, including pedestrians, bicyclists, transit and private vehicle operators. The idea has caught the imagination of some designers in the USA, but it is still largely treated as a design style rather than for what it really is – a fundamental rethinking of the underlying philosophy related to the design and operation of transportation facilities.

According to Monderman there are two distinct approaches to transportation design - one is appropriate to situations where human interaction is expected and desired. He refers to this approach as 'context time' design, where social rules govern. The second approach is applicable in high-speed situations where regulation and uniformity are essential if mayhem is not to ensue – Monderman refers to this situation as 'system time' design.

The important difference between the two approaches is that in 'context time' human interaction is what counts the most for smooth operation. In such cases, behavior should not be overly regulated by signs, lines, barriers, signals or other mechanical methods. In cities, we see 'context time' or socially regulated behavior in all kinds of situations – people stand on the right and walk on the left on escalators, they hold the door an extra beat for the person following behind, and in a busy space they are good at adjusting their paths so as not to collide with the person going in the opposite direction. There often is no need for a third party to regulate traffic in a well-designed space like the great hall of Grand Central Station – 'context time' governs and allow for the efficient and pleasurable use of the space.

In other situations, however, this would be a disastrous. On a freeway or on the runways at any airport we need order and predictability. In such impersonal and single functioning types of environment 'system time' is mandatory. Order and regulation must be strictly enforced in such high speed, mechanical environments. Thus 'system time' is an appropriate design response for many situations in modern life. The trick is to be able to tell the difference. 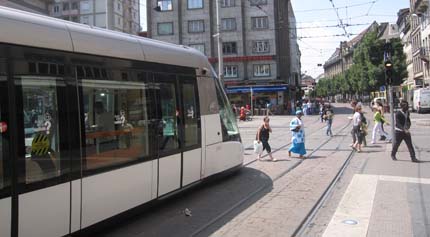 And the problem is we are no longer able to tell the difference. Monderman re-invented shared space because, in his view, we have gone overboard and now routinely apply 'system time' to situations where it is an extremely poor fit. Most urban situations are not single use environments - they should be great at serving many different functions. Urban streets, for instance, are not just places for movement, they are places where people live, work and play, and they have many different types of users. In order for 'system time' logic to function in such an environment, we actually need to dumb down these urban environments, making them more like single use places. So we add signs and signals and barriers to separate, corral and regulate behavior. When we do this, we degrade not just the character, but also the function of these places, making then less efficient and, paradoxically, less safe. We also make them more sterile, by taming and frustrating the very diversity of function that is their reason for being.

Monderman's 'shared space' was a response to this inappropriate application of 'system time' to what should be human oriented environments in cities. His goal was to create streets and plazas that were safer, more efficient and more vibrant - by giving back control to the users of the space. This 'shared space' design philosophy has been the subject of careful academic study and the results strongly support Monderman's theory. Before and after results in a number of places show a significant improvement in both traffic safety and efficiency of traffic flow, and, just as important, the human life of the street returns.

In his work, Monderman focused on the design of the streets themselves and how that design affects the interaction between cars and people. But his concepts of 'context time' versus 'system time' apply equally well to the design of other types of transportation facilities.

In France, Strasbourg's relatively new tram system is an exquisite illustration of how the concept of 'context time' design has been applied to the re-creation of a public transit system in a place that had been without a streetcar for a long time. The best place to experience how well 'context time' design works in Strasbourg is at Homme De Fer – the downtown crossing point for the two main tracks (four lines) in the city's growing system (all of the photos in this article are from Homme De Fer).

Outside of one or two tourist spots, Strasbourg is a generally a fairly quiet place - but you could never tell that from being in Homme De Fer. Homme De Fer is a delightfully chaotic people-watching place alive with the flow of people, trams, bikes, buses and the occasional car - but at the same time it is surprisingly unhurried. The street design follows all the precepts of 'context time' design, with no fences or signs restricting where people can cross. But what is really interesting at Homme De Fer is how the street design is complemented by the 'context time' design and operation of the tram system itself.

There is a kind of ballet in the interaction of the trams and the people. The trams rarely slow for the throng of people crossing their paths but simply signal their presence with one clear and gentle tone. Everyone expects the trams, which are quite frequent, and in most instances the sea of people simply parts to allow the tram to proceed. In some rare cases, the tram driver has to slow the tram down to allow an inattentive or slow crosser to get out of the way. This interplay of tram and people is particularly impressive given the diverse ability of the pedestrians at this location – everyone from teens on roller blades to moms with strollers to people in wheel chairs, to elderly folks with canes or alpine walking poles. 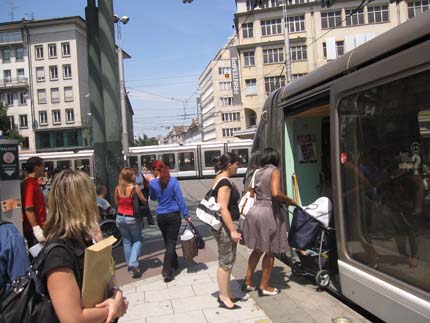 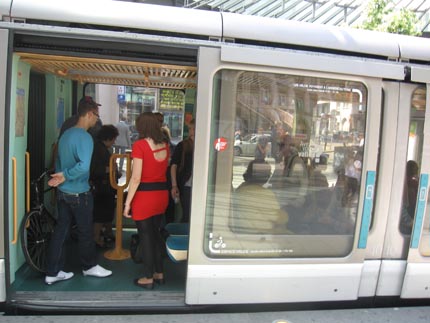 The distinctive design of the Strasbourg tram, which is rightly world famous, also adds to the human-centric operation and feel of Homme De Fer. Strasbourg was one of the first systems with low-floor trams, which aid in easy boarding for everyone. This is complemented by extra wide doors, which further contribute to easy entry and exit. Add in the tall, over sized windows and the tram itself has a lightness and transparency that makes it feel very much a part of the urban context - with an unprecedented degree of communication between people on the street and people in the trams.

The operation of the tram door also add to the sense that we are experiencing ‘context time'. Here the riders themselves are in charge of operating the tram door and the door is available to be opened as soon as the tram gets to the stop. This is so unlike the prevailing mode of operation of transit doors in American systems - where the computer is in charge and people are trapped while waiting out the pre-determined delay that is mandated after each stop. So in Strasbourg, another little ballet plays out – as the tram approaches the station you see people reaching out to open the door, giving riders another level of control over their environment. But this is also an illustration of one of the many small efficiencies that are found when ‘context time' design is correctly applied to multifunctional situations like this.

These small time savings accumulate and add up to 'context time' being much more efficient overall than 'system time' in many situations. This is why detailed studies of intersections in the Netherlands and the United Kingdom that have been converted from signal control to shared space intersections show a remarkable improvement in traffic flow. But this is not the only improvement; these same studies have also shown a significant reduction in the number of injury accidents, partly due to the fact that speeds in 'context time' are much slower. And this may be the biggest paradox that confounds conventional thinking – the fact that lower speeds in mixed-use environments often improve rather than degrade traffic flow.

These experiences suggest that we need to re-evaluate our prevailing approach to transportation design. We have developed a design paradigm that is appropriate for high-speed situations and have applied it indiscriminately to all transportation design. The result is that in many design situations we have created a misfit between the desired behavior of the users and the behavior of the system. This mismatch often compromises both safety and efficient operations. Taking advantage of 'context time' design will require that we start to develop a better understanding of how people actually behave, rather than how the ‘system time' theory say they should behave.

Just as William Whyte did in the 1970s, we need to get back to closely observing how people use well functioning public spaces and transportation systems, and then build a theory of design that is informed by this observed behavior.

Norman W. Garrick is an associate professor of civil and environmental engineering at the University of Connecticut. He is also a board member of the Congress for the New Urbanism. James G. Hanley is an observer and friend of cities. He is also co-President of Cinestudio, an independent film theater in Hartford, Connecticut.