Freeways Responsible For Emptying Out Cities

A recent study shows that for every significant freeway that gets built in a major city, population declines by about 18%. Nathaniel Baum-Snow, author of the study, talks with Planetizen.
March 18, 2010, 5am PDT | Tim Halbur
Share Tweet LinkedIn Email Comments

Nathaniel Baum-Snow is a professor of economics at Brown University. His research has been remarkable consistent and urban-centric since writing his dissertation in 2000 on "The Effects of New Public Projects to Expand Urban Rail Transit." Baum-Snow's work came to our attention when he was cited in a recent Boston Globe article quoting his study that concluded that each new federally-funded highway passing through a central city "reduces its population by about 18 percent." The implication of this type of data-driven evidence of the effect of highway construction on cities is often hard to find, so we went to the source.

BAUM-SNOW: There's a lot of anecdotal evidence we see out there in metropolitan cities that a lot of jobs exist in the suburbs, and that that wasn't nearly as true 40 or 50 years from now. But amazingly enough, there's not a lot of systematic, empirical evidence about the extent of which that employment decentralization has occurred, and their isn't a lot of empirical evidence about how commutes have changed over time. In the process of writing my first paper about highways and suburbanization, I tried to read everything I could about this and I couldn't find anybody who'd looked at this in a systematic way across metropolitan areas.

And it turns out that not only has the nature of residential and employment locations have changed dramatically, but the nature of commuting patterns have also changed dramatically. Now, the vast majority of commutes do not involve the central city at all, even commutes made by people who live in metropolitan areas, whereas in 1960, the majority certainly involved central cities either as origins or destinations or both. And that's a major change. I think the next step is to try to understand all the things that generated that change.

PLANETIZEN: Over the last couple of decades, planners have shifted their attention to thinking about regional planning. It seems to me that your research could indicate that regional planning is unnecessary, because people tend to live and work in their own locality. Is that your take?

BAUM-SNOW: Actually, I think it's an argument in favor of having more regional land use and transportation planning, and the reason is that if suburb A builds a highway to connect to suburb B, that's going to effect the distribution of commutes not only between those suburbs but also the commutes in the region as a whole. So there are going to be these externalities where someone in suburb C has a faster way to get to work, so they're going to start using it and filling up this new highway. And a business downtown might say, hey, there's this new infrastructure, let's go locate out there and I can have a lot more space to work with. So anytime one part of a region changes something, it's going to effect population and employment throughout the metropolitan area. So I think it's important to engage at the regional level.

I think that zoning and densification are important. But there's no way to make people or firms locate in a densely packed manner without providing the transportation infrastructure to allow them to do it. So you have to have some sort of policy at the metropolitan area-level. And what you can get is local communities imposing costs on everybody else by doing something like imposing big exclusionary zoning right next to the urban core. And that's clearly not economically efficient for the region as a whole- they're obviously trying to protect their housing values. So I think that it's important for regional government to be proactive and realistic with transportation planning.

Everybody would like to live in a dense neighborhood as long as they have the biggest house on the block. So they have a lot of living space, but their neighbors are all contributing to the sidewalk life. There's a balance there that is hard to get around, so there is a role for zoning that encourages density and gets the transportation infrastructure set up in a way that is feasible. 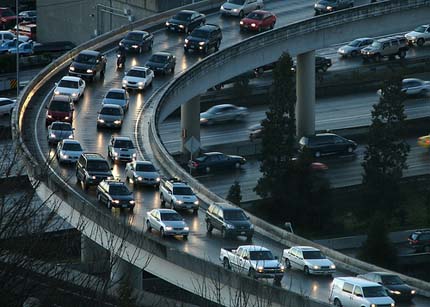 PLANETIZEN: So was the creation of the highway system a good thing overall or a bad thing?

BAUM-SNOW: I do think that there was a welfare benefit from highway construction for a lot of people. People get to live in bigger homes, they have more choice in where they'd like to live. Now most households are dual-worker households, which wasn't true back in 1950. Highways have allowed two people living in the same house to commute to different areas each day, so I think there's been a welfare gain from that. So it's sort of a mixed bag, but I think most people would say that although there have been some costs, the highway system has been a good thing.

A lot of people think that decentralization is about fleeing to the suburbs out of central cities, but if you look at the change in the spatial distribution of the population across large metropolitan areas, you find that it's really much more of a spatial phenomenon. You see that the population density in the more peripheral regions of central cities actually went up quite a bit over the last 50 years, while the population of the central business districts went down.

PLANETIZEN: And how did you, as an economist, get interested in issues of transportation and land use planning?

BAUM-SNOW: Growing up I'd always been interested in urban transportation. I always loved riding the subway, and one of the first puzzles my parents gave me as a kid was a puzzle map of the United States with all the states and the interstate highways. And I would memorize the subway maps and bus maps, stuff like that. So it was always something I liked.

And as I got older, I would explore different neighborhoods in Boston (where I grew up), and I was fascinated how you could have such heterogeneity in land use patterns and in socio-demographic patterns within such a small space. So in college, I wasn't sure what I wanted to do, but I had an interest in public policy and politics, and I took a lot of different classes. Economics struck me as a field that had the best hope in helping me think about all of these things in a satisfying way.

Nathaniel Baum-Snow is an assistant professor of economics at Brown University. You can access his research papers at his website.