The Social Life of Traffic

<p> Traffic is essentially &quot;an engineering issue,&quot; says author Tom Vanderbilt. &quot;But there&#39;s also a layer of culture.&quot;<br /> <br /> That layer of culture determines, to a large extent, how traffic can become a problem. This idea is explored in Vanderbilt&#39;s 2008 book <a href="http://www.amazon.com/gp/product/0307264785?ie=UTF8&amp;tag=planetizen&amp;linkCode=as2&amp;camp=1789&amp;creative=9325&amp;creativeASIN=0307264785" target="_blank" title="Traffic, by Tom Vanderbilt - on Amazon">Traffic: Why We Drive the Way We Do (and What It Says About Us)</a>, a <a href="/books/2009" target="_blank" title="Planetizen Top Books 2009">Planetizen Top Book</a> of the year. He recently expanded on that idea for a discussion about traffic put on by <a href="http://www.zocalopublicsquare.org/" target="_blank" title="Zocalo Public Square">Zocalo Public Square</a> in (where better?) Los Angeles.

That layer of culture determines, to a large extent, how traffic can become a problem. This idea is explored in Vanderbilt's 2008 book Traffic: Why We Drive the Way We Do (and What It Says About Us), a Planetizen Top Book of the year. He recently expanded on that idea for a discussion about traffic put on by Zocalo Public Square in (where better?) Los Angeles.

A write-up of the event and video of the discussion with UCLA researcher Eric Morris is also available. 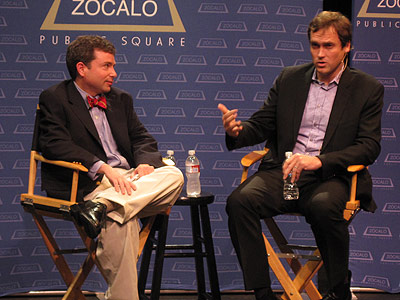 People in L.A. love these sorts of discussions. We've got a mess of a traffic problem in this city -- from intense congestion to freeway domination to a late-blooming public transit system. Something about events focused on transportation and traffic just seems to pull people together here, almost like a support group. "Hi, I'm Nate, and I have a problem with traffic congestion."

The human impact of traffic is easy to see, but less apparent is the human cause -- a point made crystal clear by Vanderbilt's work. Obviously it's humans causing traffic, but what about humans is actually the source? What about how we act, interact and live makes a bunch of drivers into a traffic jam? Vanderbilt's book cites a lot of data that offers some indication. The data shows how men cause more of a certain kind of accident than women, or how teenagers cause more crashes when there are other teens in the car with them, or a variety of other demographic- and behavior-based conclusions. These may be fairly straightforward, but Vanderbilt's discussion brings up what may be a more important if underappreciated cause of most traffic: the lack of an interactive social structure in driving.

"Traffic has a lack of a feedback system," says Venderbilt. "There's no repeat interaction."

So if I never have to see you again on the road, am I really going to be as courteous as I would be if I saw you every day? Most people probably want to think yes, but their actions say no.

Vanderbilt cites the research of psychologist Philip Zimbardo, who researches why regular people can be convinced to do terrible or evil things. One of his explanations is a concept he calls de-individuation -- the act of disregarding other people as individuals. Vanderbilt draws the connection to traffic, where it's not a person driving a car next to you in traffic, but just a car. It's just a box on wheels -- and it's in your way.

Interaction between drivers is seen by many as a way to improve safety, but also a way to improve efficiency. If people have an idea about what others are going to do before they do it, they can react accordingly, or at least not be surprised. It's also the principle behind the move to remove signs from roadways. By removing that reliance on clearly defined rules, people are forced to fall back on their highly evolved but incredibly elemental communication skills. In the end, it's all about being cognizant of each other and working together to get where we all need to go. After all, that's not a finite resource. I can get to my job on time just as well as anyone else on the road, and my success does not limit theirs.

Maybe what we really need is a support group. Or at least the realization that, as fellow Interchange blogger Josh Stephens once wrote, we're not in traffic, we are traffic.