Back To The Future: The 1970 Los Angeles 'Centers' Concept Plan

Many say Los Angeles is a city that grew without any rational planning. In reality the planning was there -- but much of the best planning never quite materialized.
April 5, 2007, 9am PDT | Christian Peralta
Share Tweet LinkedIn Email Comments

A perfect example is the 1970 Concept Los Angeles plan -- a vision of what the city could have looked like and now a history lesson for planners. For the first time, it is available in digital format for free download on Planetizen.

"Come to Los Angeles! The sun shines bright, the beaches are wide and inviting, and the orange groves stretch as far as the eye can see. There are jobs a-plenty, and land is cheap. Every working man can have his own house, and inside every house, a happy, all-American family ... Life is good in Los Angeles ... It's paradise on Earth."
–- Tabloid journalist Sid Hudgens in the film "L.A. Confidential" (1997)

While Los Angeles is often derided in casual conversation as a city that grew without any rational planning – such a statement couldn't be further from the truth. Los Angeles was, in fact, very carefully planned. Capitalizing on its few natural resources (namely plentiful land and a mild climate), the city's early leaders deliberately sought to create a city in stark contrast to the older American cities in the East and Midwest – one that embodied that very ideal of "paradise on Earth." 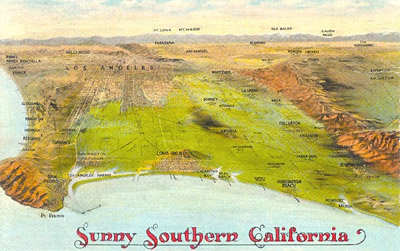 It was deemed that Los Angeles would become the anti-city. Angelenos would live not in cramped apartments close to their industrial jobs, but in airy bungalows with tidy yards. To allow for development in far-flung communities around the region, the original boosters covered the Los Angeles Basin using a far-reaching intra- and inter-urban street car system. This was of course controversially followed by the development of an expansive freeway system, with which the city is still closely associated.

In short, the rest is history. The combination of affordable homes, decent jobs, and easy transportation proved enormously popular – so much so that the majority of urban development in the United States continues to follow this model.

Yet by the 1960s, Los Angeles was starting to reach the limits of its original planning. With cheap land in increasingly short supply, freeways clogged with growing numbers of commuters, and smog becoming a major problem – urban planners realized they had a problem on their hands. If the city was going to try to preserve the region's high quality of life, growth could no longer be business as usual.

So, under the supervision of then-Planning Director Calvin Hamilton, the city's planners set about developing a concept plan to deal with the city's future growth. In 1970, after years of research and development, the city released "Concept Los Angeles: The Concept for the Los Angeles General Plan". 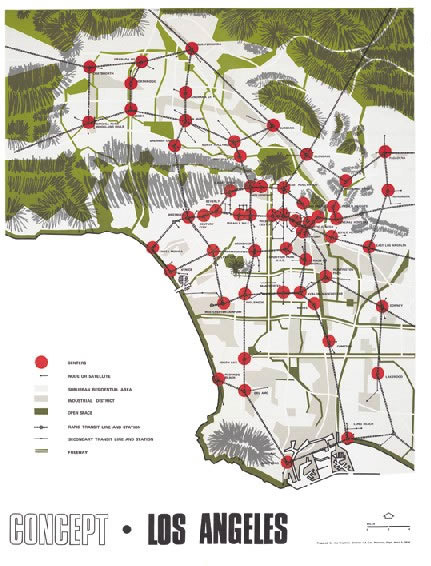 Know as the "centers concept", the main idea was bold and simple: concentrate high density development in a few established activity centers, connect these areas with rapid transit, and leave low-density areas alone.

Fast forward to today, and planners and concerned residents in Los Angeles (and other cities around the country) continue to advocate for what is now called "transit-oriented" development to accommodate the continued growth of the Los Angeles region. While terms such as "mixed-use" and "ped shed" aren't explicitly used in the plan – the core ideas are very much present. Public-private partnerships, open space preservation, and housing choices also are advocated in the concept plan. Indeed, the entire document echoes many of the core principles of the modern day smart growth movement. However, this was during a time when cities were still seen as symbols of futuristic progress -- an outlook much different than today's romanticism of the cities of the past.

Yet, except for a few dense centers such as Warner Center in the San Fernando Valley, the "centers concept" of the 1970s has left little impact on land use and transportation in Los Angeles.

Adopted in 1974, the plan was supposed to lead to changes in the city's zoning and subdivision codes, not to mention galvanize support for a rail transit system. Yet many elected officials and the public at large never bought into the ideas embodied in the plan. The city – with some exceptions due to political pressure or economic downturns – continued to follow the same growth paradigm. And though several rail transit lines were ultimately built, the city's grand transit scheme was never realized. 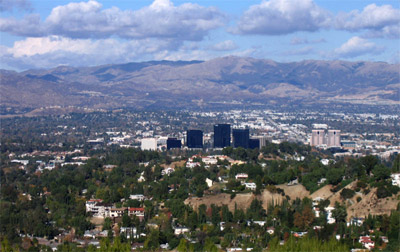 Yet even though its recommendations remain largely unrealized, the plan continues to serve as a powerful reminder of an interesting and important chapter in the history of a modern day metropolis struggling to nudge its auto-oriented landscape (and even more auto-oriented population) in a new direction. The ideas contained within the plan's pages – many of which are still considered sapient by today's standards of sustainability and livability – certainly speak to the progressive vision that some planners have tried to advance in Los Angeles.

Now as we look back more than 30 years to the Concept Los Angeles plan, we can learn from the wisdom of the past. But we should also caution ourselves against repeating the mistakes that prevented the realization of what may have been an effective and influential plan. Will others in decades to come look back on the plans of today and find the same unrealized wisdom or misguided thinking? We can only wait and see.

As a courtesy for those who are interested in learning from history and past proposals, Planetizen is offering a free download of a previously unavailable digitized version of the original Concept Los Angeles plan, published in 1970.

If you have a historic or current plan that you would like to make available to the broader planning community, please contact [email protected] for more information.