A comparison of American and Canadian cities demonstrates that sprawl in has less to do with the American Dream than with the influence the highway, oil and auto lobby has on US transportation policy.
October 4, 2004, 12am PDT | Patrick Condon
Share Tweet LinkedIn Email Comments

Americans are famous for debating issues without reference to foreign precedents. The sprawl debate is no exception. Yet a country exists that grew up with the US, has a similar government, a similar standard of living, similar level of education, even generally similar patterns of immigration. Canada is that country. I moved here in 1992 from my native US. During that period I have become more and more convinced that Canada has something to offer as the US debates the pressing issues of affordability, congestion, pollution, and equity -- all issues that are intimately tied to urban form and sprawl.

Canadian cities are, on average, twice as dense as their American counterparts, with 14.2 persons per hectare in the U.S. compared to 28.5 in Canada. Canadians own nearly as many cars as Americans, but drive them about half as much per year. Consequently, their per capita contribution to global warming is half that of their American counterparts. Canadians are also about 2.7 times more likely to take transit than are Americans.

Too often Americans, when asked to explain these differences, say its because the US has a different culture. Americans are pioneers and need a lot of space. Americans have a special love for the automobile and the freedom it provides. The truly courageous will point to race as a factor - red-lining and fear impelling white flight to suburban areas. They say that Canada, which does not have the history of white vs. black strife, cannot be compared to the US. Finally, those with an even deeper understanding of policy matters will point out that neither the mortgage deduction nor cheap Fannie Mae loans were available to Canadians, factors that dramatically increased homeownership in the suburbs.

While all of the above appear to have played a role, we suggest they are all overemphasized. In our analysis of the difference (PDF, 2 MB) between the two countries it appears that the answer is far simpler. As James Carvelle might say: it's the highways stupid! 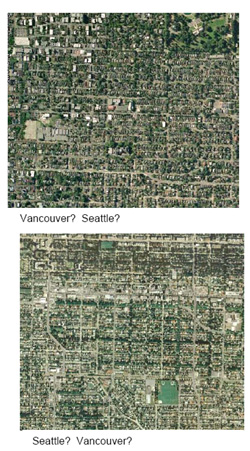 Why do we say this? For one thing, because the huge difference in city form itemized above did not exist prior to WWII. Prior to 1940, US and Canadian cities seem identical. A comparative analysis of urban neighbourhoods built before this date show very similar patterns of density and land use. Even the size of the blocks and average parcel sizes are the same. It appears that transit, the streetcar in particular, was the major force controlling city form in both countries. The "streetcar city" pattern is one where trolley car arterials are accessible within a five or six minute walk of most homes while commercial and jobs areas are arrayed linearly along these arterials. Whatever cultural differences existed between Canada and the US at that time -- whether it was "love of freedom" or the "American Dream" -- seems to have had very little influence on city form.

So what changed? Why did the two countries diverge so markedly? It appears that highway construction was the major impetus. While Fannie Mae, mortgage deductions, and race were important, highway construction seems to be by far the most important stimulus to sprawl. To illustrate this point: Canadian cities typically spent far fewer dollars per capita on freeways, but Canadian cities that spent more heavily on highway construction exhibit similar reductions in density and increases in auto comparable to US counterparts-- even without the problems of race and the inducements of mortgage interest deductions.

Conversely, certain US cities avoided the more serious consequences of sprawl during this same period. Portland and Seattle have not seen the kind of wholesale abandonment that still eats away older St. Louis neighbourhoods. Interestingly, Portland and Seattle have only .5 meters of freeway lane per capita, at the lowest end of US cities studied. St. Louis residents get twice as many freeway miles per capita, the highest of all cities studied. In fact, freeway lane miles per capita have been steadily increasing in St. Louis during the same decades that neighbourhood abandonment and urban decay accelerated

Our analysis also suggests that if you really want to move asset value from center cites to the suburbs build highways. In Vancouver, a city with no freeway lanes at all and with a paltry .25 meters of freeway per capita, pre WWII neighbourhoods have seen an average increase of 300% in inflation-adjusted dollars. Similar increases accrue in Portland and Seattle, particularly during periods where the amount of freeway lane per capita was dropping. Meanwhile homeowners in St. Louis appear to have been on the wrong end of a capital value flight to the suburbs, an asset flight that seems to us to have been induced by overbuilding highways. Parcels in inner city areas of St. Louis have declined by 30% in inflation adjusted dollars over the 40 year period of intense highway building.

While our analysis is far from conclusive (and indeed, given the degree of interrelation between transportation, land use, market forces and so forth, a completely satisfactory isolation of the influence of one factor or another may not even be possible) it does show a strong correlation between the amount of highways miles per capita and urban land values in older "trolley car" neighbourhoods. We also believe that the cross border comparison allows us to separate the influence of highway construction from that of race, home financing, and tax laws. Finally, we believe that our analysis, while preliminary, suggests that sprawl in the US has less to do with the American Dream than with the influence the highway, oil and auto lobby has on US transportation policy.

Patrick Condon, ASLA, is an Associate Professor and the James Taylor Chair in Landscape and Liveable Environments at the University of British Columbia. The full study, Canadian Cities American Cities: Our Differences Are The Same is available as a PDF (2 MB).