The simple acts of building and playing offer an antidote for today's polarized debates. The great irony of our polarized times is that virtually no one believes that they themselves are contributing to polarization. “Well, what I’m saying is TRUE,” we think, “so of course I have to say it, and of course those who disagree with me are wrong.”

Cue the current state of affairs at school board, townhall, and city council meetings, where we are seeing explosive stand-offs over mask-wearing and critical race theory, housing shortages and density, policing and public safety. Lots of strong opinions on either side, and not a whole lot in the way of budging or even listening.

It would be useful for all of us to step back and ask ourselves when we last changed our minds or broke bread with someone we fundamentally disagreed with. Chances are nil to none that we did so because someone told us to, or we read it on Twitter, or someone at a townhall meeting screamed the opposite of what we believe in our ear.

So, why would it be any different if we placed ourselves in the role of the teller, or the Tweeter, or the angry townhall-goer? Those on the receiving end of our strong opinions invariably wouldn’t change their minds or reach across the aisle to share a proverbial beer with us. 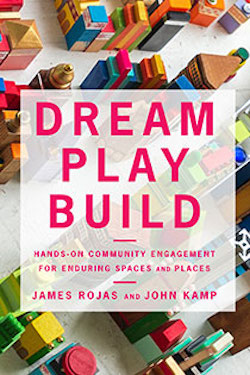 Blunt and incisive language rarely leads to communing with those we don’t wholly agree with or entertaining new ideas. In fact, quite the opposite is true: when we publicly engage through talking and language around the issues that we feel most adamantly about, we fire up the selfish, survival-obsessed part of our brains. And for survival brain, change equals certain disaster, or worse, death.

Perhaps the most horrifying change to survival brain is a future world that looks different from how we think it should. And so we look for reinforcements to gird up our side and keep change at bay. In the process, we don’t just create more polarization; we simultaneously close down our imagination, our creative selves, and any eagerness to strive for a different reality.

If your sense lately has been we are living in a society that has grown increasingly cranky, tired, and creatively bereft, it’s because, in our text- and language-obsessed era, we are. We have created a nation of citizens whose survival brains are on overdrive and whose creative brains have effectively been relegated to the corner.

Change starts with flipping the script and giving our stubborn talking brain a timeout. We set aside the faulty notion that more and cleverer and stronger language will ensure that those we disagree with will finally see the light, and we literally bring our hands up onto the table. We attune our senses to the wide world around us. And we build—with others, with strangers, with people whose political views we never even talk about.

In the work James Rojas and I do, we bring people together from oftentimes completely different, occasionally opposed, backgrounds—police officers and community members, recent immigrants and long-time residents, developers and those experiencing homelessness—and have them use found objects to build models of both memories and the communities of their dreams. We take them on walking tours of streets and spaces in which no one is the guide except our senses. In the process, the part of our brains that is less obsessed with survival and more curious about the world takes center stage and we can sink into a state of collaboration and play.

In one instance in Palo Alto, California, we were invited to mediate a tense standoff between older and younger residents who were literally screaming at each other over who had access to a bike and pedestrian underpass. A conventional approach would have had both groups sit down around a table and talk it out. However, we had them build.

To remove participants from the heated here and now, we had them first go to their past and build models of their first memory of a mobility experience. They built experiences as varied as walking through sandstorms in New Mexico to being pushed in a stroller through downtown Palo Alto. When we then had them examine the models for similarities, clear themes emerged: feelings of freedom and exploration, being outside, navigation, friends, and family—in short, shared values of the group that transcended age and preferred mode of getting around.

Establishing this shared set of values then set the tone for the remaining series of interactive activities. Absent the adversarial feelings that had characterized previous public meetings and interactions, residents young and old could now let their guard down and work together to build models of a redesigned underpass. And creative ideas flowed forth, including our favorite: a button you could press at the underpass entrance that would generate a whale sound indicating to pedestrians that a bicyclist was coming through.

While the city now has to seek out funding to implement a redesign of the underpass, the model-building workshops generated an invaluable set of relational outcomes: defusing polarization, establishing shared values, giving everyone a seat at the table, and allowing everyone to be their best creative self.

It is precisely this hands-on approach that could be taken to address polarization within the rancorous school board meetings, townhalls, and city council meetings of our era. Set aside the heated, language-based exchanges over mask-wearing, policing, and the like, and have people build models that represent the best of their past and the healthy communities of the future. The activity would allow shared values to emerge and give participants a sense of all the things we can agree on.

To the uninitiated, our approach can seem like an implausible and exaggerated flight of fancy, but what we are doing is simply tapping into fundamental psychological truths within all of us and allowing our better, creative, collaborative selves to shine.

This unforced emergence of our better selves also means we have no need to set ground rules to ensure that participants remain civil. When we are removed from a survival-focused way of being and can sink into a state of play, and when we work with our hands and senses—the very tools we all used to first explore the world—collaboration simply unfolds.

We also at no point insist that people use certain words or certain language. In the same way that we place no premium on perfection in people’s models, we don’t expect perfection in people’s language. Particularly amongst highly educated circles, a certain, rarified set of words and terms has emerged that are supposed to signify a user’s care and values vis-a-vis a set of issues: unhoused instead of homeless, Latinx instead of Latino, and so on. At best, these terms can be off-putting to the uninitiated; at worst, they are polarizing. And insisting on the use of one or the other simply brings us back to where we started: obsessing over language and creating an atmosphere in which people shut down their creative minds and their willingness to play, and see each other as adversaries.

Over time, our minds develop the neural equivalent of the grooves in a record. They play back the same songs, reliably and predictably, and we derive a sense of comfort from that. We all need a modicum of consistency and sameness in our lives to feel okay in the world. But our insistence on engaging around the issues that matter to us through language alone means that everyone is just a bit too stuck in their own grooves.

And that’s what polarization is at the end of the day: you’re in your set of grooves; I’m in mine. To unstick ourselves requires a way of breaking out of those grooves that is not frightening or scary. When we bring our hands up onto the table and start to build, we do just that. From there, whole new worlds open up.

John Kamp runs the landscape, urban design, and engagement practice Prairieform. He has developed innovative tools to engage people of all ages and backgrounds in both design and the natural world, with two decades of experience leading hands-on interactive workshops with James Rojas of Place It!. He frequently translates the findings and outcomes of those workshops into designs for inclusive and livable streets and neighborhoods that leave room for all residents to improvise and help create a more welcoming public realm. He is the author with James Rojas of Dream, Play, Build: Hands-On Community Engagement for Enduring Spaces and Places.

James Rojas is an urban planner, community activist, educator, and artist who runs the planning, model-building, and community-outreach practice Place It!. He is an international expert in public engagement and has traveled around the US, Mexico, Canada, Europe, and South America, facilitating over 500 workshops, and building 100+ interactive models. His research has appeared in the New York Times, Los Angeles Times, Dwell, Places, and in numerous books. He is the author with John Kamp of Dream, Play, Build: Hands-On Community Engagement for Enduring Spaces and Places.