From Eco-Districts to Green Justice Zones

A great challenge facing urban planning in the short- and long-term future is how to complete green infrastructure and development without spurring gentrification and displacement. We know from the well-studied eco-districts of Europe—Vauban in Freiburg, the Western Harbour and Augustenborg in Malmö, and Hammarby Sjostad and the Royal Seaport in Stockholm—that it is technically possible to develop or redevelop a large neighborhood that integrates adaptation features such as green roofs, stormwater management, sea-level rise protection, and mitigation features including district energy, renewable energy, highly energy efficient buildings, public transportation, electric vehicles, etc. Unfortunately, we also know that they illustrate eco-gentrification—green urban enclaves for the well-off.

The challenge for urban planning is to develop green justice zones in less affluent neighborhoods in a way that doesn’t create gentrification and ultimately push existing residents out. That is a political and planning challenge that an increasing number of cities are taking on.

In Europe, the best-known attempt to create an eco-district in a low-income neighborhood is Malmö’s Augustenborg, a poor neighborhood with a large immigrant and refugee population. Although the city’s goals were to build green stormwater management infrastructure and complete energy retrofits on older housing stock, after listening to resident input, a more integrated strategy adding community gardens, car sharing, façade upgrading, and other features were added. All involved cite community participation as an essential aspect of the initiative.

Green zones have emerged in the U.S. context as strategy that, like the European eco-districts, integrates climate mitigation and adaptation strategies. In the United States, green zones often prioritize undoing past environmental harms such as high pollution or lead levels. In this sense, they could also be called green justice zones.

Providence’s 2019 Climate Justice Plan, which I highlighted in a recent post, is targeting two green zones in its early implementation. Among the potential projects in the zones are microgrids to maintain power when outages occur, weatherization, renewable energy development, job training, and zoning reform to prevent polluting land uses.

We saw very soon after its designation that when getting rid of sources of pollution got in the way of economic development, the new source of pollution—in this case a liquid natural gas facility—won. So, community-devised green zones are only as good as city and state government support.

In the United States, there are two types of green zones. The first type is created by community groups and implemented independent of city government, which I’ll take up in my next post. The second type is led by the city as part of its climate action plan. Minneapolis and Providence are the two examples of the second type, and the Providence team looked to Minneapolis in conceptualizing that city’s approach to green zones.

The 2013 Minneapolis Climate Action Plan calls for reducing greenhouse gas emissions by 80 percent by 2050 and is the nation’s first to recommend green zones for climate action. The idea came from members of the Environmental Justice Working Group for the Climate Action Plan, who had been following green zone initiatives in California, particularly in Los Angeles. They made the case for adapting the idea for inclusion in the plan.

The group met monthly, poring over data. According to Minneapolis Sustainability Coordinator Kelly Muellman, the city’s interactive map tool was essential to the group’s being able to narrow down the communities most in need, allowing the group to explore population characteristics, industrial activity, air quality, housing quality and affordability, food access, and employment.

The Green Zones Workgroup identified two priority zones—one on the north side and one on the southside. The first step was to establish goals for the two zones. Following, the Workgroup reviewed data to identify the specific areas and strategies to be implemented in each. After drafting recommendations, the Green Zones Workgroup held seven focus groups in frontline neighborhoods throughout the city to get feedback. final report called for an integrated approach emphasizing improving air quality, cleaning soil and water contamination, providing affordable green housing, adding green space, improving access to healthy food and creating green jobs as priorities, while advancing racial equity and preventing displacement and gentrification.

In November 2016, by unanimous vote, the Minneapolis City Council asked the city to explore leading practices for community building without displacement from gentrification and report back their findings. In particular, the sustainability office called for inclusionary zoning, zoning for smaller lot and unit sizes, and financing for affordable housing. With wide community support, the City Council officially designated a northern and southern green zone in April 2017, both areas with a legacy of racially discriminatory policies, such as redlining, freeway development and industrial pollution. Then the work of the task forces and advisory committees charged with creating work plans for the two green zones began. The Southside Green Zone adopted its plan in December 2019, and the Northside Green Zone in March 2020. 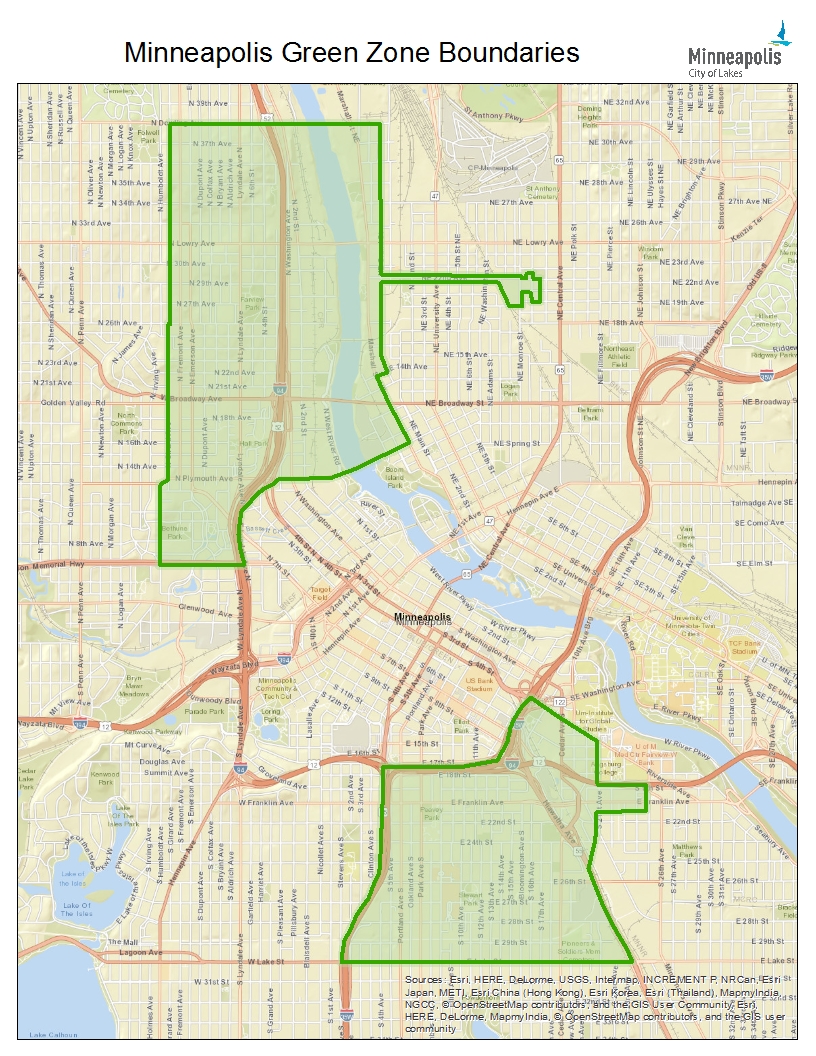 The first thing other cities can learn from Minneapolis is that a green zone approach takes time. It took six years from the Climate Action Plan’s publication to the formation of the first green zone. The goal was to select the first activities from the recommendations of the Northside Green Zone plan by April 2020. When the Covid-19 pandemic hit, the working groups had to take three months off, meaning the budget request for the 2021 budget would not get in on time to be considered. With the city’s budget deficit, no new requests are being considered, so it may be a while before the green zones receive any significant city funding.

A city considering green zones has to identify ways to fund the process and the programs. The Minnesota Pollution Control Agency provided $10,000 to fund the Green Zones Workgroup, which included stipends for community participants. As is often the case, a local foundation is essential to the urban equity agenda. The McKnight Foundation, located in Minneapolis, teamed with the Funders’ Network Partners for Places program to provide $150,000 to support the first year of the Southside Green Zone planning process. In addition to funding an equity consultant and community engagement consultants, the grant covered stipends for community participants who met to create the implementation plan, its specific action steps, and to develop a budget for implementation. In 2018, the City Council kicked in an additional $75,000 to support the Southside Green Zone and $40,000 for the Northern Green Zone planning processes. And in 2019, a City Council member earmarked $100,000 from city budget as a one-time addition.

Muellman notes that the Minneapolis Green Zones were passed by resolution, not as an ordinance. That leaves them vulnerable if political winds shift. And they are managed by a single staff person, making a faster progress difficult. Further, Muellman notes that “One of our bigger challenges is the political will for more protective policies and/or changing our processes within government. Changing the political culture—how we do our work and who we work with—takes time.

Planning is relatively cheap. Affordable green housing and new energy and transportation systems are expensive. Participatory planning can be an exercise in frustration if the fiscal cupboard is bare or if conventional economic development trumps climate objectives.

What happens when cities get beyond planning to implementation? In my next post, I’ll look to the community-led green zones that have been in place for eight or more years to examine progress.