Motor vehicles are expensive to own and operate. Many lower-income households spend more on transportation than they can afford due to a lack of affordable mobility options. The solution is more multimodal planning. My recent column, "Transportation for Everyone," described how multimodal planning can create communities where residents can access services and activities without a car. This offers many direct and indirect benefits. Let's explore what this means for residents' economic freedom, opportunity, and security.

The figure below illustrates average U.S. household expenditures, indicating that most most households exceed this threshold (dashed line in the graph). When lower-income households cannot afford food, medicine, or higher education, the real cause is often unaffordable housing and transportation that leaves too little money for other essential goods. 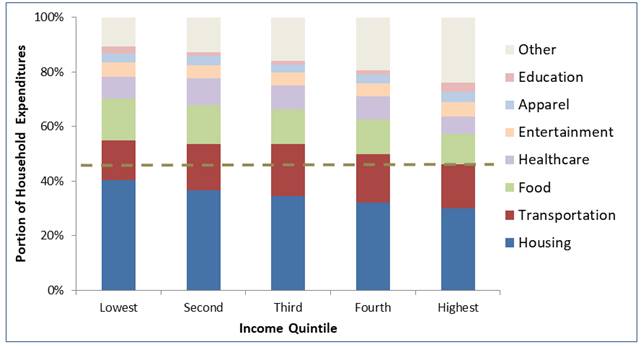 Most households spend more than 45% of their budgets on housing and transportation (dashed line), which is considered unaffordable.

Of course, every household is unique, with its own transportation needs and abilities. The amount that a household should rationally devote to transport depends on their incomes, other cost burdens, and their mobility needs. Since most lower-income (first and second quintile) households spend significantly more than 30% of their budgets on housing, most should spend significantly less than 15% of their budgets on transport.

Since approximately a third of lower-income households own their homes and a quarter are car-free (they own no vehicles), these average statistics overstate the cost burdens on some households and understate those burdens on households that pay rents or mortgages, and own automobiles.

Households can justify owning a vehicle if needed to operate a personal business or commute to a higher-paying job, provided that the extra income significantly exceeds the additional expenses; for a typical worker that would mean earning at least $4,000 more per year or $2.00 more per hour. Some households need a vehicle to transport a member with a disability or for a sport or hobby (for example, as a university student our son spent a large portion of his income on a car in order to enjoy his passion for whitewater kayaking), while others may want to own fewer vehicles than they could afford in order to spend more on education or travel or because they enjoy a car-free lifestyle.

Although lower-income motorists use many strategies to minimize their vehicle expenditures—they purchase older vehicles and minimal insurance coverage, and perform their own repairs when possible—it generally costs thousands of dollars annually to legally own and operate an automobile. It may be possible to spend less than $3,000 dollars a year for a vehicle driven just a few thousand annual miles, but motorists who drive more than about 6,000 annual miles must generally spend at least $5,000 annually for insurance, registration, fuel, maintenance and repairs, and other expenses. These cost burdens can be particularly harmful to financially insecure households because motor vehicles often impose large, unexpected expenses for repairs, crashes and traffic citations; a good rule-of-thumb is that households should not own a motor vehicle unless their budget can easily absorb a sudden $2,000 expense.

This table shows the amounts that households can afford to spend on transportation, based on their incomes and housing expenditures, assuming that housing and transport should total less than 45% of total spending. This indicates that a third or more of households cannot afford car ownership, and about half of all households can only afford one car.

This indicates that more than a third of households cannot afford a car, and about half can only afford one. At some point in time, most households need affordable transportation options that allow multiple adults to share one vehicle and avoid the costs of second and third cars, or to deal with a vehicle failure or medical problem that limits driving. This is in addition to many other benefits of living in multimodal communities, including improved safety and health, and reduced chauffeuring burdens.

Unfortunately, many communities fail to serve these consumer demands. Currently in the United States, there are 1.9 vehicles per household and 87% of households own at least one vehicle, which is far higher than this analysis indicates is affordable. A lack of affordable transportation options forces many households to spend more on vehicles than is rational, reducing their economic freedom, opportunity, and security.

Automobile unaffordability is reflected by high housing foreclosure rates in sprawled, automobile-dependent areas, and high subprime auto loan default rates. Many lower-income households purchase cars on credit but cannot maintain their payments. These are generally old, unreliable vehicles with high operating costs and little resale value, purchased with high interest rates. In many cases, consumers continue to bear debt even after vehicles are repossessed. Wall Street experts consider this an economic risk, but planners should also recognize that each subprime vehicle loan default is a personal tragedy: a financially struggling household that, because they lack affordable transport options, is forced to spend its scarce dollars on a low-value and unreliable vehicle, which they lose due to an unexpected financial stress.

There are solutions. I can report from personal experience that it is possible to live car-free or car-light (one car shared by multiple drivers); my wife and I have not owned a car in nine years. We walk, bike, bus, and occasionally use taxis. This is constraining in some ways but liberating in others: we don’t worry about vehicle parking, repairs or tickets, and we save $5,000-10,000 annually compared with automobile-dependent peer households, which financed our children's university education. All this walking and cycling keeps us fit without requiring special time or expenses, and results in frequent neighborly interactions so we now know most residents, and pets, on our street. This lifestyle is possible because we live in an accessible and multimodal [pdf] neighborhood.

Some studies indicate that lower-income workers in automobile-oriented cities such as Los Angeles tend to earn more if they have an automobile available for commuting, but on average, all the additional income is spent on additional vehicle expenses so they are no better off financially. Living in a more accessible, multimodal community increases economic opportunity. One major study found strong correlations between neighborhood accessibility and higher economic mobility (the chance that a child in a low-income household will eventually earn a high income): a child born to the bottom fifth income group that lives in a neighborhood with a high WalkScore is much more likely to become financially prosperous than a poor child born in a less walkable area. Another major study found that children born in lower-income households located in compact, multimodal communities are much more likely to be economically successful than otherwise similar children that grow up in sprawled, automobile-dependent communities.

Of course, not every household chooses the cheapest transportation option: many choose to spend more on vehicles than functionally necessary, for status or enjoyment sake. However, it is important that households be able to reduce their transportation costs if needed to respond to a financial stress, such as reduced incomes or an unexpected financial burden. Multimodal planning provides true economic freedom, opportunity and security.

Automobile-dependent planning has changed automobiles from a luxury into a necessity. Excessive vehicle costs leave many households without money to purchase essential food, shelter and healthcare. They need more affordable transportation options.