End the Transit Commuter Benefit, And Replace It With This

If we really want more people to use transit, and we think it's a worthwhile goal to subsidize people's commutes, why go through all the trouble of tax deductions and employer control? Why not just subsidize transit passes directly? We have a lot of poorly-designed tax policy in this country, and transportation policy is no exception. Under IRS Code Section 132(f), the federal government outlines its "qualified transportation fringe" benefit, which, as of 2014, allows for tax deductions of up to $245/month for parking, $130/month for transit, and $20/month for bicycling. For transit, the commuter benefit can cut the costs of a monthly pass by 15 percent or more, which amounts to hundreds of dollars per year for most regular transit users. That kind of cost reduction could have a significant impact on ridership, but, unfortunately, whether you get that discount or not is up to your boss, not you, and most small businesses (and even many large ones) simply don't offer it.

Broadening the reach of this program would be hugely beneficial to cities and their residents, saving money for the people who need it most and boosting transit use in the process. I started thinking about how we could accomplish this a while back, and wrote about some of those ideas on my blog over a year ago. If you want a little more detail about how the commuter benefit works in practice, I recommend you check out that previous post.

Recently though, as I continued to think about how we might get this benefit into the hands of more people, particularly employees of smaller businesses (which are much less likely to offer these types of fringe benefits — see here, page 9) I started to wonder: if we really want more people to use transit, and we think it's a worthwhile goal to subsidize people's commutes, why go through all the trouble of tax deductions and employer control? Why not make things simple and just subsidize transit passes directly? 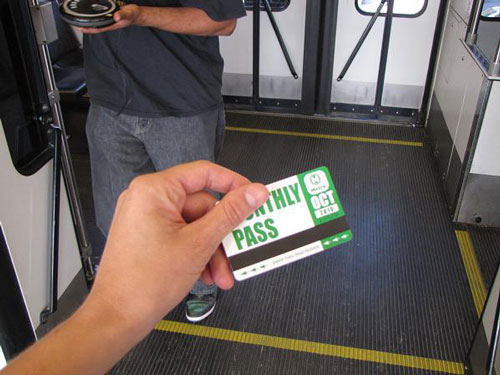 Photo from Next Stop STL.

Currently, if employees want to have their transit passes (or parking) subsidized they're basically reliant on their bosses to care enough about the program to offer it. The benefit does reduce the tax burden on the business as well as the worker, but the bulk of the benefit goes to employees and it's possible that the costs of time and paperwork exceed the benefits for many small employers. It's an unnecessarily complex process that almost seems designed to reduce commuter benefit claims. If the government wants to subsidize commutes it should be prepared to subsidize everyone's commutes, not just those fortunate enough to work for large employers, like Microsoft or GE, that have the resources to offer them.

Instead of going to all this trouble we could move to a system where transit pass prices were directly subsidized by the federal government: organizations like the MTA and King County Metro could set their fare prices, then automatically reduce them by a set amount — say 20 percent. Then, at the end of every year, they could determine the cost of the subsidy and submit a bill to the government. In other words, almost exactly what we already do, without all the pointless intermediate steps.

Direct subsidies would have a number of benefits over the current system:

This would also put more power in the hands of employees. If we wanted to retain the payroll tax deduction for employers (and I'm not really sure why we would, since they wouldn't play a role any longer), it would be up to the employer to reach out to the employee to confirm their participation in the program, not the other way around. If we eliminated the payroll tax deduction for employers, as we probably should under this new system, those savings could help pay for its increased employee-subsidy costs.

To those who would argue that the commuter benefit is for getting to and from work, not for all transit trips, my first question would be: Why? Is travel to work the only one of any value, economic or otherwise? I would definitely argue against that notion. Also, since the tax deduction is usually tied to the purchase of a monthly transit pass, not one-off fares, we're already failing to differentiate between work and non-work trips. When I worked for the University of Washington I received a heavily discounted transit pass, and I used it for visiting friends and going to the store as often as I used it for my commute, and I think that's okay. It's especially important that we get people out of their cars during peak commute hours, but it's valuable at all times of day, for all purposes.

What do readers think? Any benefits I missed, or unforeseen consequences you think I may have overlooked?

Op-Ed: It's Time for a Weakened Mortgage Interest Deduction To Go

Last year's tax reform bill seriously curtailed the mortgage interest deduction, despite its reputation for untouchability. Perhaps lawmakers should get rid of it entirely.

A new report from the California Housing Partnership "revealed a wide gap between state support for homeowners and renters."

The current mortgage interest deduction is $1 million. The House version of the tax bill called for a $500,000 cap while the Senate left it untouched. They split the difference and capped it at $750,000. Congress is expected to pass H.R. 1 this week