The Shared Dynamics of Obamacare and Public Transit

Seems like an absurd pairing, right? Perhaps so but please hear me out.

Not so long ago, I wrote an article about the misconceptions of transit use [link]. At the time, there was a study that implied that most people do not use the Los Angeles transit system because of the innate, widespread discrimination against those who are of a lower class or different race. Busses carry negative associations and so the study closed by saying there simply wasn’t a good culture for transit [link] and [more linky].

I don’t argue this. It’s a sad truth that such discrimination and baseless perception permeates our world. But thankfully, we can rise above it, at least in the realm of transit use. There are solutions that can make transit use grow. The key isn’t to spend our meager resources battling “culture”. Such efforts are noble but indirect. Instead, we should simply invest more into the transit system and make it as safe, convenient, and comfortable as possible. We should raise its technical performance rather than worry about its social perception.

The obvious (but seemingly ignored) fact of great transit systems is that they are no different than any other consumer service: if you build them (properly), people will come (eventually). The key is to achieve great safety in the system, followed by greater convenience or affordability (or both) compared to the other options (e.g, the car). The meager graph below can exhibit this point: 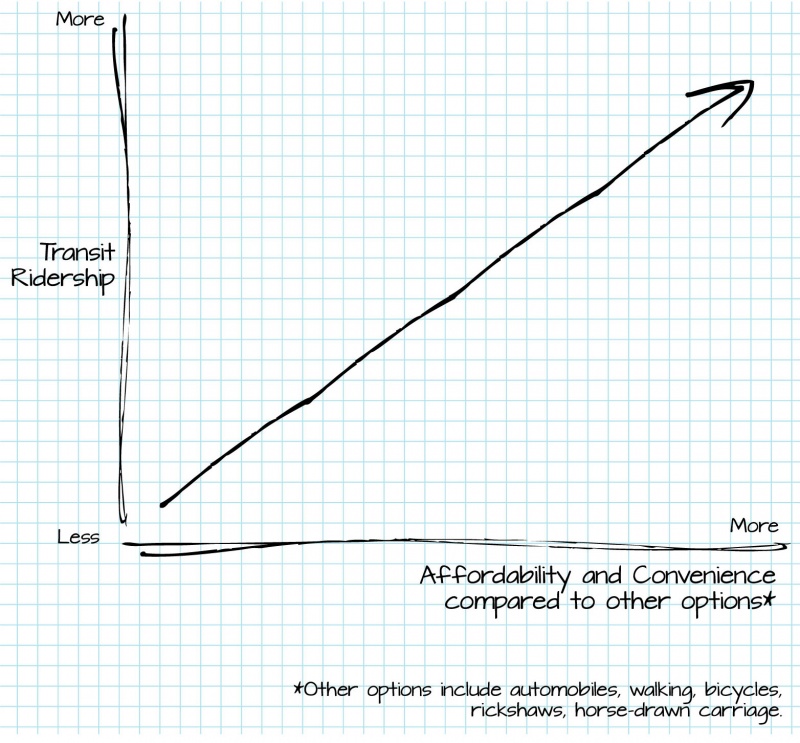 The actual thresholds for this dynamic varies between every person, every city, every culture (my “convenient and affordable” likely varies from yours) but there is still a point where a transit system is so good that even the most discriminatory, car-loving, bus-hating soul will get on board.

Does this make sense? I hope so because, again, it is part of a core theory for virtually all consumer behavior.

I find it fantastically exciting. It means success is often in our hands if we just design something that is good enough to succeed. It also encourages us to look inward to find the solutions to our problems. I often witness hand-wringing over a lack of bus ridership but I seldom see hand-wringing over the lack of a high-level user experience. It’s far too common to blame America’s love of cars or lack of density than it is to focus on what can be controlled now: making the best service possible.

Anyway, I’m rehashing all of this because the same core dynamic is apparent in another government service: the Patient Protection and Affordable Care Act, that effort so many people seem to call “Obamacare”.

Now before anyone starts with the insinuations, please know that this is intended to be an apolitical conversation. I’m not here for the politics; I’m here for the theory. Both systems (transit and Obamacare) share the same challenge: they must acknowledge the basic characteristics that drive consumer activity in their sector, recognize the barriers that are entailed, and deliver something really great to overcome them.

Both systems are optional*. Both systems compete for your participation against a number of other entities. In the healthcare system, Obamacare competes with other insurance companies and the ever-present option of doing nothing. It is a service that needs many users—particularly healthy users—to survive. Ironically, though, the healthy users are the ones with the most choices. So Obamacare has to be the best choice available for those who have many options. That’s a serious challenge.

But it’s doable. Amongst the healthy candidates, there is a segment that is curious, maybe even eager, to try Obamacare. We can call this potential group the “early majority”; these people are out there, floating in the ether, waiting for a reason to jump aboard.

I use the term “early majority” deliberately in reference to the famous Roger’s Bell Curve. 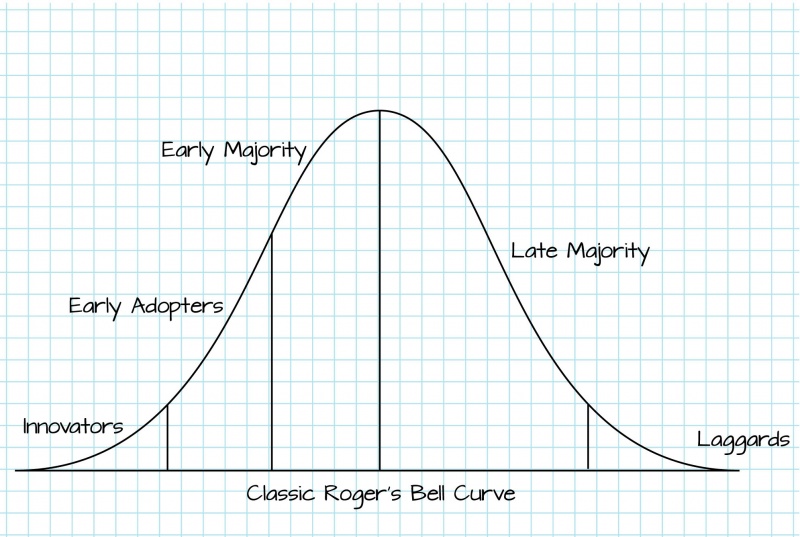 The Roger’s curve was developed in context to technology adoption and product growth but it works quite well with public services. In both cases, the curve represents the need to reach a critical mass of users. When enough people buy a new smartphone (or take the bus or enroll in Obamacare), the product grows from an early minority to an early majority and then climbs “over the hump” into the mainstream. Once in the mainstream, the consumer (and cultural) attitude shifts from “Why are you doing that?” to “Why are you not doing that?”

Again, thankfully, the answer is no. Either can and will succeed when they perform well enough and are accessible enough to attract those who actually have a choice in the matter. To better illustrate this idea, let’s adjust the Roger’s bell curve to express this dynamic for public services rather than private goods. See below: 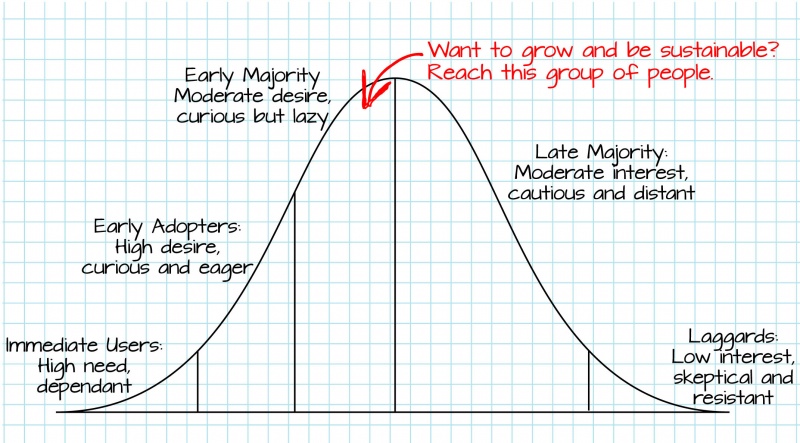 The most important aspect of this revised curve is the transition between those who adopt out of necessity (they have little choice) and those who adopt out of convenience. Most public services are designed to help those who have the greatest need. That’s wonderful! But if we are going to see broad adoption and usership, these services must evolve into something that retains that cohort while also attracting the next.

Failure to do so means that Obamacare may only draw in those who are sick and bus services may only pick up those who can’t afford a car.

It is that (wickedly) simple. Consumer businesses have known this for years. That’s how great companies compete: by refining their product/service to deliver better experience with easier access in order to retain and attract more consumers. Competition drives them.

We do not have such competition in the public sector. Or so we think. But the truth is that the same basic competition is out there and always has been. Sometimes our transit system competes against the car. Other times, our universal healthcare competes against perceptions and the ease of doing nothing. We call these things “barriers” but they are better considered as “competition”.

I am proud of the fact that we design systems to help those who have so little choice. But for those systems to grow and prosper, we must design them to do more: to attract those with the ability and choice to go elsewhere.

So next time the ridership totals come in and you see the same old figures, the same lack of growth, don’t blame the culture or anything else that’s external. Look at the system from the consumer angle. Look inward, judge whether or not the service is creating real value, and chances are you’ll find the solution.

*Though Obamacare features a well-known public mandate, there is a strong logical implication that this mandate is ultimately doomed if the service doesn’t work. For more on this rather keen insight, consult the following piece from Ezra Klein’s Wonkblog: [link]
Government / Politics Social / Demographics Technology Transportation transportation; public services; growth models; obvious theories of obvious things

Norman Wright, AICP, was a Director of Development Services for a municipal government in Tennessee.