While there's no denying the fact that the number of children in many American cities has declined, it's untrue that urban life is incompatible with raising a family, or that families in cities are being replaced by singles and childless couples.

As cities race to attract urban Millennials and empty-nesters — flooding the market with small apartments, approving dozens of new restaurants and bars in every neighborhood, and building streetcars, bike lanes, and pedestrian plazas — families are being pushed out or left behind. Cities are rapidly changing and, these days, they're just not any good for raising kids.

Famed city-haters like Joel Kotkin would certainly like you to believe this is the case, and here at Planetizen Michael Lewyn recently asked if Washington, DC was a childless city (his conclusion: it's not). Fortunately for the Kotkins of the world, there's plenty of cherry-picked data out there to support the conclusion that cities really are no place for children. Take this graph of the change in the under-18 population of various cities, for example: 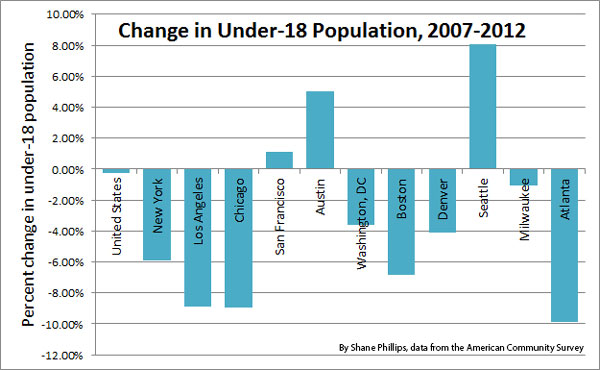 As you can see, the national under-18 population fell very slightly between 2007 and 2012, but look at those cities! Huge declines! All those children and their parents must be leaving to the greener pastures of blissful suburbia, where parking is free and politicians still appreciate families. We've made cities unlivable for families, either for a lack of open space, excessive congestion, or because we keep tearing down their homes to build apartment towers and mixed-use monstrosities! Oh, and bike lanes!

But while there's no denying the fact that the number of children in many American cities has declined, it's simply untrue that urban life is incompatible with raising a family, or that families in cities are being replaced by singles and childless couples. In fact, the number of households with children has increased in many of these cities, even as the United States as a whole has seen a decline in such households: 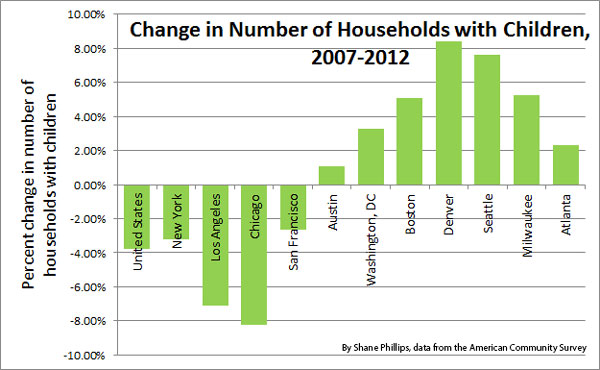 Even among the above cities where the number of households with children declined, New York and San Francisco still saw smaller declines than the national average of -3.77%. Only Chicago and Los Angeles experienced declines greater than the US average. And there's no apparent connection between density and family appeal: New York saw half the decline of Los Angeles despite having triple the density; Boston, almost five times as dense as Austin, experienced a much larger increase in households with children. Even Washington, DC, the childless city itself, actually has more families living in it now than it did five years ago.

So no, families generally aren't leaving cities, they're just getting smaller. Many cities continue to attract more families as they grow, but those families are trending toward fewer children on average — low-car leads to low-kid, it seems. Of the cities sampled above, only Chicago and Austin saw increases in average family size (of 1.43% and 2.51%, respectively). The demographics of cities have changed, but just look at the cost of housing if you've any doubt about their appeal.

None of which is to say that these changes don't carry the potential for negative consequences, or that some families aren't getting squeezed by the evolution of American cities. Even with more families in cities, a larger number of children may be growing up in the suburbs, which means less economic mobility, poorer health, and restricted freedom of movement with increased dependence on parents to get from place to place. There remain serious issues with the decreasing affordability of cities, and they're likely to be especially severe for larger families. These and other concerns deserve our attention, but with an honest recognition that urban regions remain an attractive option for many families, and that they continue to flock to many of our fastest-growing cities.

Table with additional data below. Feel free to email me or ask on Twitter if you'd like help getting data for your own city: 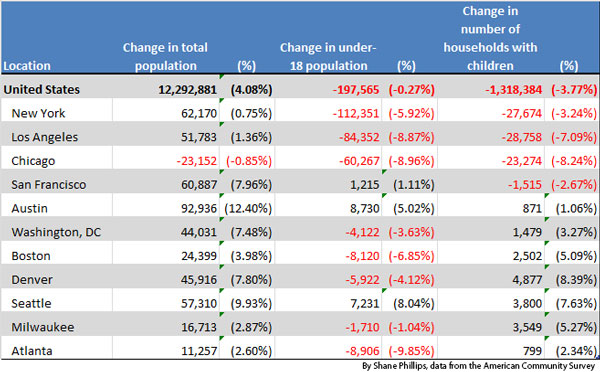 Over the strong opposition from neighborhood groups, the Denver City Council has approved new regulations that allow up to five unrelated individuals to live in the same household.

The question of whether there is space for children in rapidly changing cities was under investigation in two recent studies with somewhat contradictory findings.

Op-Ed: Zoning Shouldn't Discriminate Based on the Definition of 'Family'

By designating that "family" refer to a specific set of ties, many zoning codes make it difficult for "functional" families without those ties to find a place to live.