Navigation or Legibility – Which Way?

Fanis Grammenos returns to the subject of urban form, this time to interrogate the connection between legibility and navigation. In this essay, he considers whether an orthogonal city layout aligned with the cardinal directions is a necessary condition for easy city navigation.

In an earlier article, Beloved and Abandoned, we presented the grid plan, using Portland's layout, as a historic relic perhaps deserving of attention but clearly unfit for replication in contemporary settings.  That, evidently, is not occurring in any case. Several commentators quickly pointed to the supreme legibility of the simple grid as a counterpoint; clearly an indispensable attribute, they said. But is it?

The value of legibility lies in its presumed link to navigation.  It is assumed that good legibility makes navigation easier.  But does it? Is a simple, orthogonal geometry aligned with the cardinal directions a necessary condition for easy city navigation?  Apparently not, as we shall see.

Though related, the two concepts, navigation and legibility, are quite distinct.  One is about an act and the other about a mental construct.  "Navigation" and "way-finding" appear interchangeably in architectural and planning literature and they both mean reaching a destination with ease.  "Legibility" which originates from text reading, is harder to grasp, but it does relate to a map in the mind, be it a letter, a picture or a configuration of streets.  Legibility expresses the ability to project an image and discern its match with what one sees.  Navigation as an act could be compared to dancing – a sequence of rhythm-coded steps that is partly or entirely preset and that becomes intuitive.

The first notion to consider in deciphering this puzzle is that navigation, or finding one's way to a destination, not only predates geometry by millennia, but it is also a basic skill of most sentient, even "non-intelligent," life.  Examples abound from bees to birds to fish and turtles and many more.  Closer to home, emotional, and sometimes incredulous, recounting of pets returning from a distant foster home, point to that instinctive ability.

In humans, a few striking examples, first from the non-urban world, show the distinctiveness of the two concepts and the independence of navigation from geometry.

Inuit will trek for many kilometers beyond the base horizon in pursuit of game, often in poor visibility, in what seems an undifferentiated, unremarkable, featureless landscape and, surprisingly to us urbanites, find their way to a destination and back home with astonishing efficiency.  Legibility, understood as a geometric order or map, is entirely irrelevant in this landscape. 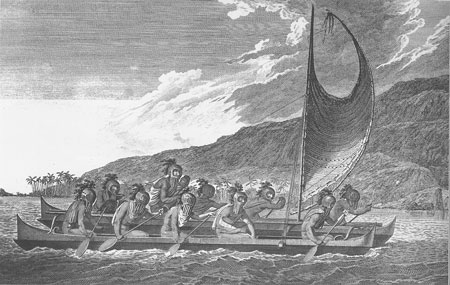 Figure 1. The feat of seafaring for thousands of kilometers in the Pacific Ocean without a single navigation aid still astonishes cultural anthropologists and navy captains, by user: Makthorpe [Public domain], via Wikimedia Commons

An even more astonishing example comes from Polynesia.  For many centuries before they were "discovered" in 1595, the Marquesas inhabitants had ploughed the vast Pacific Ocean in stone-age-tool-crafted open catamarans to trade with and settle in other distant pacific islands.  The crew of ten included a captain and a "wayfinder", two very distinct roles (the wayfinder does not sleep!).  Not a single navigational aid existed on board.  These seafaring traders and settlers were able to regularly reach distant ports well beyond the visible horizon, often thousands of kilometers away, with accuracy and efficiency that surpassed by far the skills of fully equipped European sailors.

A great captain, Magellan, for example, sailing west from Cape Horn, missed the Marquesas and other pacific archipelagos to land, months later, with a malnourished and decimated crew, on Philippines.  The Marquesas wayfinder "knew" his directions with infallible precision. Nothing could be less "legible" and more disorienting than a vast, featureless ocean during weeks of sailing.  Evidently in this case, legibility, as a geometric construct, has little to do with navigation. 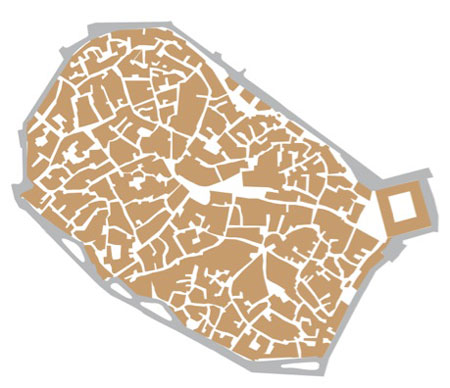 Figure 2: A typical medieval city street network within a perimeter wall, now a peripheral arterial. Visitors get easily lost in the maze, but not its residents.

From the urban world, examples also show that navigation does not depend on legibility.  Most visitors describe Arab cities such as Fez, and Marrakech or Medieval cites such as Vienna and Martina Franca (Fig.2) or Asian cities such as old Tokyo and Mumbai, as mazes, impossible to navigate even with a map in hand.  In each case, the street pattern lacks clear geometry, has no uniformity or repetition, is rarely rectilinear and seldom abides with cardinal directions.  Yet for many centuries, the residents of these cities thought nothing of navigating through their streets.  Even more surprising, these same labyrinthine streets had no names and house numbers, yet posed no difficulty to reaching destinations.  Intensifying the surprise, are the cases of planned Roman cities with a highly legible orthogonal grid that were transformed into maze-like patterns by their subsequent occupants as if legibility was undesirable. 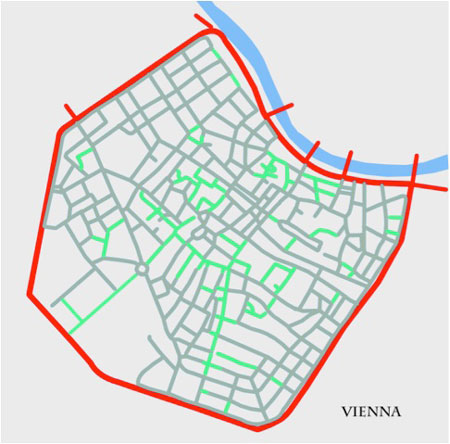 If navigation was not an issue in these early pre-urban, non-urban and urban conditions, then the introduction of a simple geometric arrangement of straight streets and repetitive blocks would seem unnecessary for that purpose.  In fact, Aristotle, long after Hippodamus drew the famous grid plan of Miletus, argued against his configuration and in favour of the old, "organic", labyrinthine pattern on the grounds of defence, as did Alberti 1,500 years later.  Camillo Sitte made the same case on aesthetic grounds, entirely unconcerned about legibility, having lived in Vienna, (figure 3) a medieval city, and grown to admire many other similar cities, with irregular street patterns.

These examples show clearly that humans on foot, on horses, carts and in boats have been able to find their way to a destination in natural, non-urban and in urban environments unaided by geometry and printed maps.  The one presumed outstanding feature of the simple grid, legibility, proves to be unnecessary for navigation and simply an after the fact attribution by post-Guttenberg humans looking at maps.

Fanis Grammenos is a principal of Urban Pattern Associates and was a Senior Researcher at Canada Mortgage and Housing Corporation for over 20 years. He focused on housing affordability, building adaptability, municipal regulations, sustainable development and, recently, on street network patterns. Prior to that he was a housing developer. He holds a degree in Architecture from the U of Waterloo.