What's to Become of Small Towns?

John Wilbanks demonstrates that the adaptation of city-centered growth tools to small town planning exercises is not only possible, but preferable, as he recommends strategies for acting regionally, while planning locally for small town sustainability.

Demographic trends indicate that a larger percentage of Americans live in urban areas than ever before. As a result of this increasing urbanism, a city-centered growth model continues to gain momentum in the philosophical and lifestyle preferences of both the shapers and occupiers of our urban environments. As America urbanizes and planning and development tools based on increased density (such as new urbanism, transit-oriented development, mixed use, infill, regionalism and regional blueprints) gain in their application, what does this mean for planning efforts focused on small towns where such tools may not resonate with Americans' ideals or realities? Are we to cease devising strategies to improve small town living?

A starting point may be to alter our perception of what it means to be urban. When we think of urban areas we typically conjure up an image of Los Angeles, San Francisco, Seattle, Chicago, New York and other large metropolitan areas. In contrast, small towns are more mentally and emotionally connected to rural environments. However, the Census Bureau defines "urban" as a population cluster of 1,000 people or more. The EPA, in federal assistance legislation, has defined a "small town" as a city or town with a population of 2,500 or less. Ask anyone on the street, or in the planning profession, and the answers will range widely. I've lived or worked in towns ranging from 5,000 to over 65,000 that were clearly considered "small towns." So, I would suggest that even small towns can be considered urban in character, which supports my premise that city-centered growth can be a model for sustainability, even for small towns.

City-centered growth is a planning paradigm that recognizes the benefits of concentrating populations to leverage efficiency, functionality and proximity of services in large metropolitan areas. This model for growth virtually precludes small town living as a viable growth option. Nonetheless, the principals of city-centered growth can be applied to assist small towns in eliminating sprawl, preserving agriculture and natural resources, and improving mobility and walkability. However, there are challenges:

Though there are opportunities as well Federal and state monies that may be available are being directed to Metropolitan Planning Organizations (MPOs), which are regional government agencies. Regional collaboration is an unexplored opportunity. If small towns shared resources rather than competed to provide them all, the region would greatly benefit. I propose the following strategies to assist small towns in developing sustainably by building on their unique resources within a regional framework.

In contrast to thinking regionally, it is imperative to act regionally. Acting regionally involves a proactive approach to regional opportunities.

Shared Resources
Understanding your town's place in the region involves recognizing that the natural and agricultural resources are "shared" resources, requiring a heightened level of stewardship responsibility through active collaboration among jurisdictions. Acting regionally also involves identifying the opportunities to share resources such as public safety, public services and transit. An example of such strategies can be found in the Central Valley of California. The pressing economic decline has led to the disbanding of police departments in small towns such as the Cities of Riverbank, Waterford and Patterson, which have chosen to partner with the Stanislaus County Sheriff's Department for contract police services. The City of Modesto has also contracted planning staff out to small towns like Hughson and the City of Oakdale that can't afford to sustain full time staff.

Transit opportunities not possible at the small-town level may be feasible when considered at a regional scale. In addition, infrastructure such as water and wastewater systems may be more sustainable on a shared basis.

Collaboration
Acting regionally involves collaboration on political, policy and planning matters. For example, Stanislaus County entered into a Memorandum of Understanding (MOU) with several of its cities to not approve any project located outside the city limits and within a city's sphere of influence that was inconsistent with the future growth plans of that city. The MOU required a courtesy "sign-off" by the city as a part of the entitlement review process. For example, if a city's plan for growth in the sphere of influence was residential, the county would not approve an incompatible use, even if it was a permitted use under the county's jurisdiction.

Connectivity
Finally, understanding your place in the region involves adequately defining the regional corridors which link the cities and towns of a region. These include highways, roads, rail lines and rivers/drainage corridors. These features provide the framework that serves as the backbone of connectivity that connects regions physically, environmentally and psychologically. An example of this is the system of rivers and streams that make up the watershed of the San Joaquin River, (e.g., the Stanislaus, the Merced and the Tuolumne rivers) traversing thousands of acres and towns in the Central Valley of California.

Vision
While engaged in the regional context, it's also imperative to focus on the challenges and opportunities unique to your small town. The first step in effectively planning locally is to develop a compelling vision. The vision should be concise and clear, not only detailing what the town wants to become at a quantitative level (size, demographic, etc.), but also what it will look like. The vision should take into account the 3 "C's" of community– Community Values, Community Culture and Community Identity. Finally, it should consider how to maximize environmental and economic assets and how to emphasize a unique sense of place.

Compact Growth
City-centered growth really means compact growth. To effectively accomplish compact growth, community edges should be clearly defined. These can be natural or manmade but must be defensible from a policy perspective and then implemented thoughtfully. For example, the City of Turlock (in the Central Valley of California) chose a road and irrigation canal along their northern border as the edge, providing an obvious physical demarcation as well as the opportunity to buffer the adjoining agricultural properties to the north. This buffer also became an important element of the city's trail system. 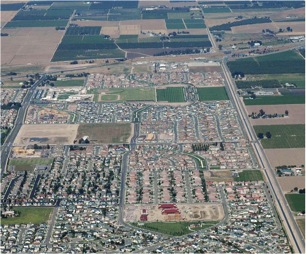 An additional suggestion for planning compact growth is to avoid segmenting new growth into isolated neighborhoods, and instead integrate new growth into the existing urban form. Once boundaries have been set, review existing zoning and land use plans to ensure there is adequate diversity and density in neighborhoods. Where possible, introduce mixed use to promote diversity while allowing flexibility to respond to market forces.

Connectivity
As a means of integrating new growth and ensuring high-quality mobility for new neighborhoods, the street system should be an open street-block network. Traffic can be managed through traffic calming methods while maintaining an open system. It's also suggested that small towns make the development of bicycle and pedestrian trails a high priority. Exceptional pedestrian and bicycle access can make a significant dent in vehicle miles traveled, even without other public transit options. Finally, consider school locations in relationship to neighborhoods and develop safe routes to schools so parents don't feel compelled to drive their children to school. 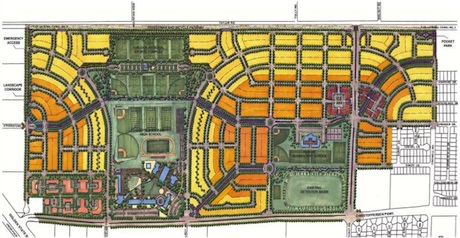 Integrate Agriculture and Natural Resources
Many small towns are situated in settings rich in agriculture or natural resources. Where ever possible these resources should be treated as assets and carefully integrated into the small town fabric, rather than treated as a transitional reserve area to one day become urban development. While some agricultural uses will need to buffered, the buffer design can be handled in a way that it becomes a point of interface between the town and resource. Farmers markets and community gardens are one way to keep locally grown food in the town and residents aware of the inherent connection between their urban and rural areas. An emphasis on agri-tourism or eco-tourism (the promotion of agriculture or environmental features as an economic asset) brings value to small towns and is increasingly popular. The County of Merced is introducing a new land use category specifically titled "agri-tourism" as part of their General Plan Update. The concept is to proactively promote this type of land use in the small towns throughout the agriculturally rich county. Finally, we need to take advantage of natural corridors for trail systems, promoting the interface with the natural systems of the community rather than turning our backs on them.

Public and Civic Spaces
Central gathering places and prominent architecture in key locations have been hallmarks of our country's small towns. These are signature spaces that are too often a last consideration, when they should be a top priority. While they can't always be implemented immediately, having a vision for these spaces as important community assets will enable the eventual reality. In 1995, the City of Newman envisioned a multi-use plaza in the center of their downtown as a major community center and gathering place. Staying with the vision as the downtown was incrementally improved resulted in the grand opening of a beautiful downtown space in May of 2011.

Pay attention to the placement, orientation and architecture to create a sense of place, particularly in civic buildings. Well-designed civic buildings can set the tone for community character and quality. Properly integrating them into their surroundings will help define streets and public spaces as quality places in the small town.

Plan Beyond Land Use
Finally, planning locally involves planning beyond land use. Think about the form of the town, both two dimensionally and three dimensionally.

The application of the city-centered growth principles to our small-town "urban" environments as described above can be a model for sustainability. Successfully utilizing these principles will allow you to continue to celebrate small town living!

John Wilbanks is a principal of RRM Design Group, an award-winning multidisciplinary design firm. With over 33 years of professional experience in both the public and private sectors, John has established himself as an expert in urban design, large-scale master planning and small town community planning. Certified by the American Institute of Certified Planners (AICP) in 1988, John is also CNU-Accredited by the Congress for New Urbanism, an organization focused on creating walkable, sustainable places.