Should Your City Build Its Own Broadband Network?

As high-speed connections to the Internet become increasingly crucial to the global competition to attract and cultivate the high-paying jobs of the digital economy, Christopher Mitchell explores the impediments preventing many communities from building the broadband infrastructure to support their economic development.

While on a site selection visit in Chattanooga, a CEO asked about broadband access. When told that the slowest tier on Chattanooga's community fiber network was 30 megabits per second, he turned to his IT adviser for a translation. Upon hearing "that's more than we can get in our headquarters presently," the company cancelled its other planned visits and located its new site in Chattanooga.

The digital economy depends on high-speed connections to the Internet. And, as recent studies indicate, communities with fast, affordable, and reliable networks will both attract and cultivate jobs; those without robust connections may suffer the same fate as those missed by railroads, electricity, and highways.

On my last visit to Chattanooga, I found young entrepreneurs living there who chose Tennessee over the Silicon Valley. Chattanooga, the "Gig City," has made waves with its decision to build a globally competitive broadband network. It is one of many communities that have built their own network to encourage economic development, improve the quality of life, and generally become less dependent on a single cable company and a single phone/DSL company.

The city owns and operates a globally competitive broadband network via its municipal electric utility. Citizens and businesses across the region choose to take services from Comcast, AT&T, or EPB, the electric power board owned by Chattanooga.

Chattanooga is not alone; more than 100 cities and towns have built their own broadband networks. The city of Lafayette, Louisiana offers probably the best deal for broadband in the nation: ten megabits symmetrical for less than $30/month. For non-geek readers, it is actually faster than my home Comcast connection at less than half the price. The Institute for Local Self-Reliance has just released a new reportdetailing how Chattanooga and Lafayette built their networks. 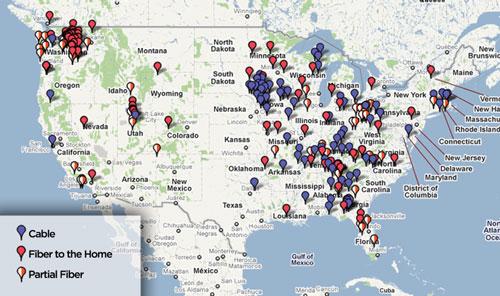 Such investments hark back to the days of electrification, when private companies argued that electricity was too complicated for local governments to tame. One hundred years later, 2,000 local governments still operate their own electrical grid, built when the private sector either would not invest or was so massively overcharging for its services that local commerce was impeded.

Presently, most Americans have two real choices for broadband at home - DSL or cable. Though wireless 4G advertisements seem to saturate the environment, 4G plans are sold with low monthly bandwidth caps that greatly limit utility. Wireless continues to complement wired connections, not substitute for them.

The big cable and DSL companies have maximized their short term profits by delaying needed upgrades, recognizing that their customers have very few alternatives. Recently, AT&T's CEO even admitted they have no solution to improve broadband in rural areas. Often at the request of local businesses, some communities have responded by investing in modern networks that offer much faster and more reliable connections, often at prices less than the cable companies were charging.

In response to real competition, cable and DSL companies have offered temporary deep discounts, below the rates that a new network can charge. If they so choose, big providers can beat the prices of any smaller competitor because they get volume discounts on equipment and programming. The national providers can run a local network at a loss by cross-subsidizing from non-competitive areas. Most important, they have already amortized the cost of their network, whereas the community networks generally have large debt payments.

This dynamic explains why most communities are limited to two providers, and why public ownership is crucial to establishing real competition. When a third provider threatens the status quo, the two incumbents try to run it out of business. But if the network is community owned, its benefit to the community includes not just potential profits from the system, but also the cash that stays in the local economy due to lower prices brought about by real competition.

For example, studies[PDF] on the community fiber network in Bristol, Virginia show that the community saved $10 million in the first six years its network was operating. It has also resulted in over 1,000 jobs, further amplifying the benefits.

Cable and phone companies have been working feverishly to prevent communities from building their own broadband networks. Not by building better networks themselves, but by lobbying state legislatures to ban community networks. 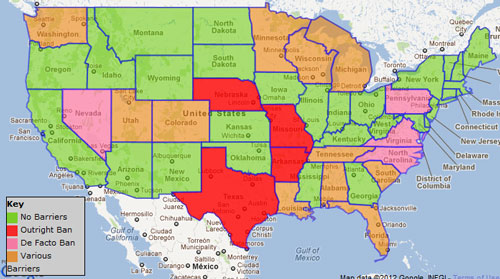 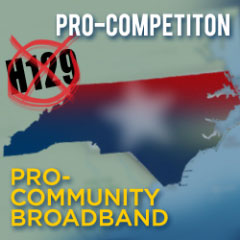 Consider a plea from Michael Tiemann, VP at technology provider Red Hat, who recalled the difficulty of creating jobs in North Carolina in an open letter calling on the Governor to veto Time Warner Cable's bill:

One of the most difficult and expensive line-items in this multi-million dollar project was securing a broadband link to the site in rural Chatham County. I spent more than two years begging Time Warner [Cable] to sell me a service that costs 50x more than it should, and that's after I agreed to pay 100% of the installation costs for more than a mile of fiber.

This is precisely why communities across the country are investigating building their own networks. The actions of a few massive private companies threaten the livelihood of thousands of companies that need better access to telecommunications services. The question is not whether any given community should build a network but rather who should make that choice - the local community or state legislators.

Between economic development and quality of life concerns, communities need fast, affordable, and reliable access to the Internet to thrive in the digital age. Harold DePriest, the CEO of Chattanooga's EPB, stated most profoundly their chief concern in building their own network: "The issue is, does our community control our own fate, or does someone else control it?"

Christopher Mitchell is the Director of the Telecommunications as Commons Initiative at the Institute for Local Self-Reliance in Minneapolis and is available at @communitynets or CommunityNets.org. He has just published a white paper with case studies of municipal fiber networks in Lafayette, Louisiana; Chattanooga, Tennessee; and Bristol, Virginia.