Enough With the 'Enough with Jane Jacobs' Already!

Toward the end of her life, Jane Jacobs was writing a follow up to her insightful 1969 The Economy of Cities

. And while she considered that book probably her most important, she made it clear that some of her observations needed revisiting. After all, she noted, all her writing was based on observation of real life -- how things are, not how they should be, what works and what doesn't -- and, therefore, if things changed in a fundamental way than it behooved any keen observer to take a second look. Sadly, her 'second look' never saw the light of day. 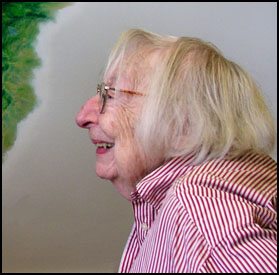 Jane loved a good debate and she loved that her writing prompted people to discuss, explore, debate, and even disagree with ideas that needed to be the subject of public discourse. She said in many ways, "don't take my word for it, go observe for yourself." She was forever asking people what they thought, even if they had asked her opinion about something. She thrived on challenges to her observations. Those challenges either brought her new insights or confirmed her own.

No one can predict what Jane would say about anything. She was too much of an original thinker to be predictable. But one might assume that she would at least be puzzled – even perhaps amused – by some of the confusion and misinterpretation of her thinking and writing these days, even attributing ideas to her that can not be found in any of her writing or activism. Fortunately, her ideas remain much too popular to be diminished by any of the attempts to undercut her thinking. It is useful to the larger civic debate, however, to challenge some of the misguided assertions about what Jane advocated, thought or caused to happen.

My favorite assumption, put forth by several commentators, is that Jane's belief in the importance of public process and the need to involve the citizens who will experience the greatest impact of a proposed change has given birth to NIMBYISM. This argument comes from people who seem to want to advance whatever official plan is on the table and who resist acknowledging the wisdom often found in citizen critiques of official plans. Most citizen objectors to official plans care deeply about their place and are not against change per se nor, most absurdly, against "any change whatsoever in the urban landscape," as one commentator said. Mostly, the objectors resist the configuration of the change being offered, not change itself, and, in most cases, have offered alternative proposals the impact of which would be less overwhelming to the targeted area.

As Jane said: "If you take the time to listen to people at public hearings, you will understand their fears." She did not argue that those fears should STOP change but should, instead, help SHAPE change. Instead, today, especially in New York, we have a pretend public process. Significant, large-scale, Moses-style projects run through a state approval process that overrides city review and throws communities crumbs, called Community Benefit Packages, while advancing the original, usually over-scaled, neighborhood replacement plan. Projects that get delayed by lawsuits do so because they are promulgated by developers with no public input and approved by the City Planning Commission with an occasional minor tweaking.

Invariably, citizen fears about traffic congestion and parking – and why shouldn't they fear such problems? – usually come to pass, causing predicted problems for everyone.

And if anyone seriously thinks New York in particular needs a Moses to get things done, they don't know anything of what has happened in New York City in the last 15 years.

In fact, some of the best 'big change' projects that have gotten done in New York or are getting done are just the kind of big projects Jane applauded – rebuilding the city's subway system, construction of a Third Water Tunnel (the largest public works project in the nation), a train to the plane, restoration of Central Park, Prospect Park, Battery Park, the 'unslumming' by many citizen 'doers' of significant deteriorated neighborhoods all over the city once targeted for clearance by Moses, restoration of Grand Central, the gradual installation of bike lanes around the city with citizen input and creation of new plazas by taking back blacktop from the car and, of course, the now famous High Line. These all cause significant and beneficial change throughout the city.

Notice, however, that none of these are developer-promulgated 'projects.' Big projects that replace or transform neighborhoods are what Jacobs criticized as 'cataclysmic' change.

For a really clear understanding of her approach to change, one should study carefully the letter she wrote in April, 2005, criticizing the city's upzoning plan for Greenpoint/Williamsburg and applauding the 'intelligently worked-out plan devised by the community itself.' (Page 117 of my recently published: The Battle For Gotham: New York in the Shadow of Robert Moses and Jane Jacobs.)

So enough with the false notion that Jacobs and today's citizen objectors are against change. 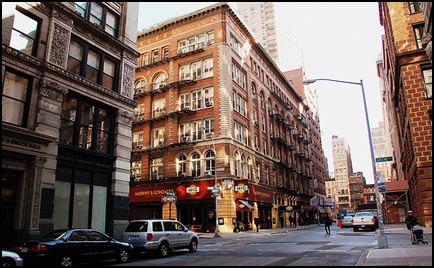 Now about this myth that Jane advocated for Greenwich Village to be a model for moderate-rise neighborhoods everywhere, opposed high-rise neighborhoods and feared high densities. Nowhere in The Death and Life of Great American Cities

or in any of Jane's writing can this be found -- she was a great advocate of density. Density, however, does not automatically translate into high-rise. In fact, with all the Corbusier-inspired high-rise public housing Moses built in New York, they were LESS DENSE than the moderate-scaled, veritable mixed-use neighborhoods they replaced. Dedensifying with tall towers set in big green open spaces is what Corbusier called for and Moses delivered. In actual numbers, the demolished neighborhoods contained more residential units, factories and small businesses than ever got replaced. Similarly, some of the densest neighborhoods have predominantly low-rise buildings but they are compact and densely sited.

Death and Life spotlights many different neighborhoods where Jacobs argued one could begin understanding the "intricate social and economic order under the seeming disorder of cities." Greenwich Village was the most personal because she lived there and observed it the most. Eyes on the street, sidewalk guardians and the natural proprietors of the street that she observed on Hudson Street were to be found, she wrote, on any well-functioning street "evident in cities everywhere."

Greenwich Village, like the North End of Boston, for Jane was a laboratory in which to study how the ecology of a city works; it was not meant as a prototype. Jane did not advocate for a particular style of neighborhood; instead, she celebrated the diversity of neighborhoods, some high-rise, some low, some more residential, others more industrial, arguing that it was that combination that made up the complexity of a city. But she did argue on behalf of respecting the character of a neighborhood, the very thing its inhabitants usually worry about, and warned against the "cataclysmic" change that replaces, not revitalizes a place.

It so happens, in fact, that the most celebrated new, very modern 'starchitect' buildings in New York today are in historic districts, enthusiastically approved by the city's Landmarks Preservation Commission on which I served until recently for the last seven and a half years. And the historic districts all over town with appropriately scaled new infill housing combined with loft conversions have given the city more new density than the absurd low-rise suburban housing projects around the city that Jane criticized or the monstrously over-scaled, over-priced new high-rises now visible particularly on the Brooklyn sky-line with more to come.

So enough with using Jane Jacobs as subterfuge to advocate on behalf of projects or ideas that one seems reluctant to do outright. If you want to advocate on behalf of official, big-scale projects that override substantive citizen objections, just do it honestly. If you want an excuse to approve the tearing down of old neighborhoods to make way for new high-rise development, just do it honestly. If you think, in New York City for example, the Landmarks Commission's designation of three per cent of the city is too much, just say so honestly. And if you think modest-scale neighborhoods need a dose of high-rise development, just say so outright.

But enough of using "rethinking" Jane Jacobs as an excuse to promote these ideas.

And remember what Jane wrote: Cities have the capability of providing something for everybody only because, and only when, they are created by everybody.

Roberta Brandes Gratz is the author of The Battle for Gotham: New York in the Shadow of Robert Moses and Jane Jacobs

and Jane Jacobs and The Living City: Thinking Small in a Big Way.