Bicyclists and transit riders are losers - right? Or are they elitist, sneering yuppies? Brian Ladd says that people's attitudes and transportation choices are shaped by deep-seated feelings about respectability, and it planners should pay attention.

Non-motorists often wonder why drivers seem so oblivious to their needs and even their safety. Todd Litman's recent Planetizen post on "The Selfish Automobile" argues persuasively that motorists' sense of entitlement has grown out of plans and hidden subsidies that stack the deck in their favor, while appearing to do the opposite. Automobile dependence, as he describes it, has structural causes and psychological effects. Attitudes, though, can carry their own power. Auto-centered planning and auto-centered lives have made it hard for American motorists even to imagine alternative transportation. The idea of getting around without a car has been just too frighteningly gauche to contemplate. But that may be changing. 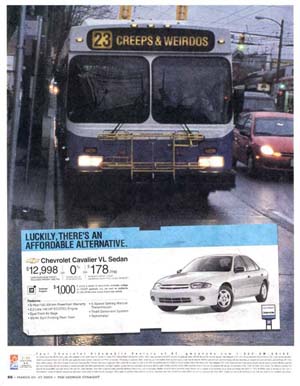 Most Americans know one thing about the bicyclists they see on the roads: they are losers, and you thank God you're not one of them. Who, after all, rides bikes (at least for transportation, not recreation) in the United States? Mostly kids who aren't old enough to drive-and not even so many of them anymore. Adult cyclists are seen as people too poor to own a car, or too dysfunctional to have a license: grizzled misfits and dark-skinned immigrants you see wobbling along the side of your suburban highway as you zoom past their elbows. Hollywood, as Tom Vanderbilt has shown in a recent Slate article, powerfully reinforces this contempt for the carless.

The reality of biking and bikers is, of course, more complicated. But even the fantasy is more complicated. In American cities with newly thriving bike cultures, cyclists have acquired an entirely different image: as arrogant yuppies. Just look at the letters column or the comments thread any time a daily newspaper publishes a story about bike lanes or shared streets. One motorist after another rages against the privileged spandex crowd that interferes with ordinary working stiffs trying to drive to work: They should be banned from the roads! The police need to crack down on them! Why do we have to get licenses and pay taxes, while they don't? Life is so unfair for us motorists! The venom is often shocking, but the sentiments are heartfelt--even if a cyclist, just home from her daily brush with death, can only shake her head in disbelief.

But wait: weren't motorists the superior ones? Who's sneering at whom here? Could it be that motorists are sitting a little uneasily in their driver's seats? It's harder to dismiss cyclists as beneath contempt when you suspect that they might just be contemptuous of you. What's a poor motorist to think? They've always known that bicyclists are scum, but now they aren't quite sure why.

The same confusion applies to transit users. Here the dichotomy is older and clearer: buses versus trains. On the one hand, you have the image of the typical bus rider (outside of Manhattan and perhaps a few other exclusive locales): the definitive loser. According to a saying that circulates in England, and is often falsely attributed to Margaret Thatcher, a man who has reached the age of thirty and still rides the bus can count himself a failure in life. American bus riders, probably even more than their British counterparts, are painfully aware of what passing motorists think of them. After all, they learned it in high school, where the world divides between kids with cars and those condemned to ride to school in the yellow "loser cruiser."

When a Los Angeles bus rider asked presidential candidate George W. Bush about transit improvements in 2000, Bush responded, "My hope is that you will be able to find good enough work so you'll be able to afford a car." Bush was undoubtedly sincere. Like many Americans-probably most-he saw a bus (like a bicycle) as a nothing more than a pathetic substitute for a car.

On the other hand, the commuter train has survived the entire auto age in several of our older cities, and its clientele has held onto its moderately exclusive image. In the long-vanished age of the "family car"-that is, when there was only one per family-the suburban housewife dropped off her suit-clad husband at the rail station, so she could have the station wagon (that's where the name comes from) for the day. Most suburban commuter lines still do, in fact, serve a fairly upscale clientele: just look at the parking lots. Meanwhile, many U.S. cities without these legacy systems are building new light-rail lines, which are clearly angling for prosperous riders who either own cars or could afford them. Even where these lines are not claiming street space from cars, they are competing for scarce transportation dollars that could be used to build roads. Understandably, some motorists are suspicious of-or simply bewildered by--what appear to be efforts to make mass transit fashionable.

It is easy for number-crunching economists and planners to ignore the power of fashion, but we do so at our peril. People's attitudes and transportation choices are shaped by deep-seated feelings about respectability. This is not to suggest that the practical advantages of cars (whether dependent on subsidies or not) don't matter. They have made it easy for American motorists to avoid contemplating their transportation choices. If at all possible, you drive. Anything else seems inconvenient, uncomfortable--and certainly embarrassing. So the average driver, like the apocryphal Margaret Thatcher and the real George W. Bush, finds bicyclists and bus riders either pitiful or incomprehensible--and politicians cannot resist demonizing bike-friendly policies.

But if cyclists and transit users no longer seem to envy motorists, then motorists might be facing a crisis of confidence. In the short run, their insecurity may harden attitudes, as anxious drivers cling to their steering wheels and rage against the trendsetters. But change may be coming. If teenagers' desire to drive continues to weaken, if Hollywood begins to give bikes and buses a trendy aura, we will know that the tides of fashion are changing. If cars cease to be the essential token of respectability-if you can be cool without one-then the automakers may be in deeper trouble than they think.

For a long time to come, cars will remain the most practical choice for many people. But motorists' anger and defensiveness may itself be evidence of a cultural revolution in the making.

Brian Ladd is an urban historian and author of the book Autophobia: Love and Hate in the Automotive Age

Transit Use Down, Remote Work Up in Seattle

Fewer workers in downtown Seattle are taking public transit to work thanks in large part to an ongoing move to remote work.

Shifting commute patterns and the popularity of remote work could pose an existential threat to the New York City region's commuter rail services.