Blue Line Extension on the Table in Virginia

Iron Man 2 and the Future of Energy

Remember the Stark Expo 74? Covering four square blocks of Flushing Meadows, New York, the Expo promised "a glimpse of the future: today!" It was the brainchild of genius Howard Stark of Stark Industries, and was centered on the idea of bringing scientists from around the world together to create the city of the future.

Okay, it's just a movie. The plot of the latest Iron Man movie centers around this retro-tastic Expo, a thinly-veiled version of the 1964 New York World's Fair also held in Flushing Meadows. Tony Stark, Howard's only son and also a self-centered genius, inherits Stark Industries in the first Iron Man movie, and invents the metal suit. In the sequel, (SPOILER ALERT), he builds on his father's legacy and creates a brand new element, a form of energy that will save the world.

Movies, and particularly summer blockbusters, are an insight into our collective wishes and dreams. Iron Man 2 builds on a long American tradition of faith in technology and innovation, and creates a throughline from our last moment of shared belief in the future to today. After all, we've achieved the impossible by breaking the atom and putting a man on the moon. So everything's possible, right?

The problem is, this idea that science will prevail and someone will create a new, clean endless source of energy is highly unlikely, and distracts from the real on-the-ground solutions that are less sexy: renewable energy sources (wind, solar, geothermal, etc) and energy efficiency.

"The truth is that no combination of alternative fuels or systems for using them will allow us to continue running America, or even a substantial fraction of it, the way we have been." said author James Howard Kunstler in an article in Orion Magazine, "We are not going to run Wal-Mart, Walt Disney World, Monsanto, and the Interstate Highway System on any combination of solar or wind energy, hydrogen, ethanol, tar sands, oil shale, methane hydrates, nuclear power, thermal depolymerization, 'zero-point' energy, or anything else you can name."

Kunstler is just one of many voices uniting around the idea that the United States needs a new vision of the future that downplays magic bullets and electric cars and makes walkable neighborhoods and increased renewable energy sources our new collective vision.

"It's amazing how much that vision involved not walking anywhere." John Fregonese, an urban planner from Portland, said at a recent conference in Cambridge. As he spoke, he showed a video of Magic Highway, USA, a film produced by Walt Disney in 1958 showing a fantastic future of commuting on wide, empty freeways in the sky. "We have the solution for a brighter future, but we aren't communicating it like General Motors and Disney."

The solution isn't anti-science: technology has a great role to play. Our electricity grids, for one, need to get considerably smarter to work with all of those newer renewable energy sources. There's also a considerable amount of electricity that goes wasted through those old power lines- at least 10% is lost from transmission alone.

The other way to prepare for the future is to improve our land use, giving people local options for food and services and transit nearby so they will walk or bike rather than hopping in a car. Planners and developers are onboard with this vision, but it is still difficult to overcome the American vision of a "future on wheels."

The problems with the Iron Man portrayal of the future go deeper, planting ideas into the common subconscious that are difficult to overcome. For instance, Stark's miracle energy source, like the one in his previous metal suit, has no discernible method for generating the power that runs the apparatus. Nuclear fuel rods don't just emanate electricity; they heat up water to create steam, which turns pistons. In this age of tiny batteries, it's easy to forget that energy is still bound by physics – unlike Iron Man's flying, energy-beaming suit, which generates the speed of a jet using only a glowing triangle.

A few media sources took the trouble to fact-check some of the science in the movie. Can you build a particle accelerator in your room? Answer: yes. Could a new element be created by forging two elements together? Again, yes. Could said element be the ticket to powering the world as we know it? The answer is no, but that bit of science isn't being challenged. 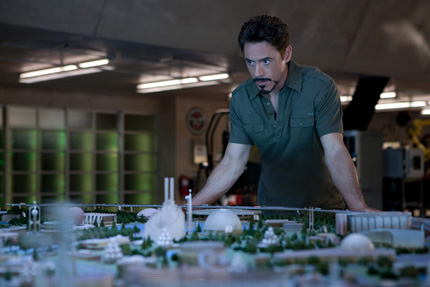 There is one possible miracle fuel left out there: Fusion.

"I think that fusion is the answer, but it won't be the answer until at least 2040," says Gavin Weir, a research assistant at the University of Wisconsin-Madison. Weir thinks that fusion could be a "Star Trek-like" jump forward in energy technology, and there is in some ways a magic element in the process. "Deuterium is a naturally occurring isotope that can be extracted from water, and there is enough deuterium in a glass of water to produce as much energy as 10,000 barrels of fuel."

Of course, fusion is still a long way off- the first demonstration reactor isn't expected to be online until at least 2040. And even when it is, it could be decades more before power plants are up and built and our electricity grid is updated. So we're looking at the next century before this vision is possible, and it's likely we're running out of oil now.

So how do we convince the American public? The growing recognition of the problem of global warming has certainly helped, even as it has divided red states from blue ones. As I see it, the two visions have been tied together too long – we need to be working towards a new energy future for the sake of our country's prosperity, not just to save the melting ice caps. We need new, powerful visions to show the world that efficiency and renewables are as sexy as Teslas and magic highways. We need a summer blockbuster set in a futuristic landscape of wind turbines and romantic, dense cities.

Hollywood, are you there?

Tim Halbur is managing editor of Planetizen. This article is presented in collaboration with Grist.

Blue Line Extension on the Table in Virginia