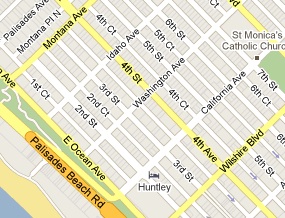 Many LA suburbs are in fact incorporated satellite cities, built upon a classic street grid that makes them inherently walkable. These central nodes were well served by the Pacific Electric Railway until the 1930's, when the automobile began to assert itself.   So it wasn't long ago that one could travel the region on foot and by rail.

Today, a No Man's Land between freeway barriers greets visitors as they drive from airport to hotel to tourist destination. This backdrop - parking lots, warehouses, strip malls - presents the city as entirely devoted to the car. 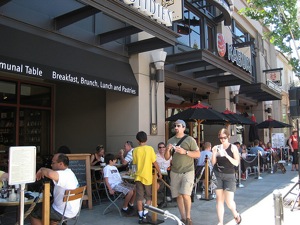 But this impression is superficial.   The older neighborhoods, rich in cultural and architectural history, remain quite walkable.   Within city limits: Downtown, Hollywood, Los Feliz, and others are navigable on foot .  Outside of the city, central portions of Pasadena, Santa Monica, and Long Beach are some of the most pedestrian-friendly spots anywhere.

Pasadena in particular has made great efforts to restore and maintain its urban character since it adopted a visionary General Plan in 1992 .  It has directed new development to the central core while incorporating landmarks that date to the City Beautiful era (City Hall, the Civic Auditorium, the Pasadena Public Library).  There are whole blocks dedicated to parks, plazas and inner courtyards that engage rather than detract from the street.  Two main avenues - Colorado and Lake - now form a continuous retail corridor that is accessible from nearby residential neighborhoods.   In short, Pasadena is a model for how to weave public space, retail and housing to promote walking.

Even in pedestrian-oriented Los Angeles, roads tend to be wider and blocks tend to be larger than the ideal  because traffic engineers have long tried to accommodate all of those cars circulating through the metropolis.

What's missing is transit connectivity throughout the region.   Mayor Villaraigosa's 30/10 plan, which seeks federal aid to complete an ambitious transit expansion in 10 years instead of 30, makes sense because the city has already waited too long to tackle traffic congestion.   The subway and light rail extensions to popular destinations on the Westside should increase ridership systemwide.   The plan will also help to link LA's most walkable centers, which were designed for transit and are poised to become transit-rich communities again.