The Taming of the Motorcar

"In the early days of his development, man realized that certain members of the animal kingdom could be made useful to him." So begins a rumination by architect Victor Gruen on the process of domestication and why we can't seem to domesticate the automobile.

When I was producing The Story of Sprawl, I became fascinated by the urban planning of the early 1960s. Today, planners tend to believe the storyline that Americans fell into a sort of trance in the 1950s where the suburbs were idealized, and that we only woke from this dreamy slumber in the late 1990s to realize that we needed to start getting more urban. The more I read from the early '60s, the more it seems the problems associated with sprawl were already apparent, and a handful of very intelligent commentators were already looking for solutions. Jane Jacobs wasn't a lone voice- Lewis Mumford, Christopher Tunnard, and architect Victor Gruen were all writing scathing commentary on the autocentric culture spreading across America.

This excerpt from Victor Gruen's The Heart of Our Cities: The Urban Crisis: Diagnosis and Cure is a great example. Anyone who regularly deals with land use will recognize the absurdity that Gruen illustrates. Enjoy. 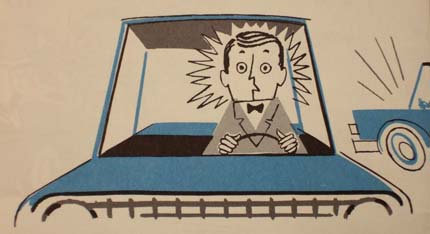 The Taming of the Motorcar

In the early days of his development, man realized that certain members of the animal kingdom could be made useful to him. The horse, the cow, the dog and many birds were domesticated, and out of a dangerous, disturbing animal population were created some of the most useful helpers of human development, serving as transportation for people and goods and as suppliers of food.

Because automotive beings are man-made creations and not supplied by nature, it seems we have felt hesitant to apply similar methods. And yet if two types of creature which constantly interfere with each other are to find a pattern of coexistence, something obviously has to give. In respect to this, there are today two schools of thought. The more powerful and prevailing one is that the problem of coexistence should be solved by taming and domesticating man. It is felt that by training the members of the human population, but teaching them certain tricks, like walking at "green" and stopping at "red", by putting them behind fences or chains along curbs, their spirit of individuality and independence can be broken so that they will be willing to submit to the regime of the automotive beings.

I have recently read the report of an International Conference of Traffic Engineers held in Salzburg, Austria, in August and September of 1962; in this convention of human animal trainers, a number of highly interesting methods for the taming and training of people were discussed and recommended. It was suggested, for example, that people who want to cross the roaming ground of automobiles should wait behind turnstiles and queue up, and should them be allowed, only in small groups, to trickle across. Others went further, and favored complete elimination of sidewalks -- which, they presumably hoped, would lead to the elimination of people.

There was quite general agreement that structures utilized by members of the human race would have to be cut down to a minimum in order to create sufficient lebensraum for members of the automotive race. Wherever and whenever traffic experts meet, they take it upon themselves to devise plans for the redesigning of the human environment. They have, in fact, to an astounding degree, become the dictators in all questions concerned with city planning.

To realize the abnormality of this situation, one need only try to visualize for a moment a convention of plumbers dictating to architects the entire construction industry how buildings should be designed, inside and out, in order to a) increase the employment opportunities in the plumbing fixtures industry, and b) facilitate their installation.

They would dictate that every room in every building must have a bathtub, water closet and three washstands -- otherwise unemployment in the appliance industry may result -- and that plumbing pipes of all types must no longer be forced into positions where they are hidden in walls and ceilings, but should be permitted to run any odd way, diagonally, vertically, or horizontally, through living rooms or offices. This demand would be rationalized as the facilitation of water and sewage traffic, as demanded by our era of technology. Every protest against these measures would them be ridiculed as reactionary -- or, worse, as "idealistic" -- and an attempt to turn the wheels of history backwards.

It is not hard to recognize, from this fictitious plumbing-convention story, that the traffic planners really do not behave too differently. They, too, demand as gospel the proposition that more and more automobiles should be manufactured, as otherwise the automotive appliance industry might be underemployed, and they most definitely insist that their plumbing pipes crisscross the public living rooms and working rooms of our cities. Anybody who opposes their views is characterized as either "an ivory tower planner," "a reactionary out of step with the miracles of technology," or an outright imbecile.

I am perfectly willing to risk the attacks of the traffic planners when I insist that the solution to coexistence of the human and automotive population does not lie in the taming and training of people, but in the taming of the motorcar. I am not in favor of the destruction of automobiles, not even necessarily of the diminution of the automobile population; but I am most definitely in favor of domesticating it, and making it useful to the human race, just as we did with the horse and the cow and with various types of poultry.

Victor Gruen (1903-1980) was a noted Viennese architect who became known as "the father of the shopping center" for his design of Southdale Mall, the first enclosed shopping center, in 1954. He decried the mall culture that followed, saying that his ideas had been bastardized.

The Heart of Our Cities: The Urban Crisis: Diagnosis and Cure by Victor Gruen is out of print, but you can sometimes find copies at Amazon.