Women, Transit, and the Perception of Safety

Transit agencies are failing to bring women into the planning process, according to a new report from the Mineta Transportation Institute. We talked with UCLA's Anastasia Loukaitou-Sideris, author of the study, about what she uncovered in her research and strategies for improving the perception of safety on transit for women. 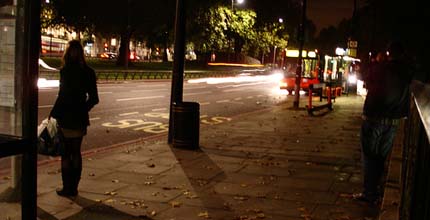 Anastasia Loukaitou-Sideris is no stranger to the issue of safety and transit. In 1998, she authored a study with her colleague Robin Liggett looking at 120 bus stops around Los Angeles and found significant links between environmental attributes and crime. But her latest study goes beyond the actual crime statistics to look at fear itself. What makes women riders feel unsafe, and thus decide not to ride transit?

We talked to Loukaitou-Sideris about this fascinating study.

LOUKAITOU-SIDERIS: In many parts of the world, women rely on public transportation more than men. And women are more fearful than men being out in public spaces. This study looks at women's particular needs as transit riders, especially in respect to safety and security. What are they afraid of? What are the issues they are facing? But the other part of the study has to do with how these needs are being met, or not met. And then finally, are there any innovative solutions?

I did a number of surveys with national groups that are advocating for women's issues, and a nationwide survey of all transit agencies throughout the U.S. that have more than 50 public transportation vehicles. Almost every state was represented. And the findings were revealing: While two-thirds of respondents believed that women travelers have some specific needs, only one-third felt that transit agencies should really do something about it. The most shocking part of that survey was that only 3% of the agencies had any programs for women.

In terms of the interviews, women have significant concerns about riding transit, and there is a mismatch between the practices of transportation agencies and some of the wishes of women riders. For example, women are much more scared waiting at the bus stop or transit station than within the enclosed space of the transit vehicle. Yet most transportation safety resources are concentrated on the vehicle. Women were also not comforted knowing that there was a camera or CCT technology. They were not against it, but they felt that if anything happened to them the camera would only help after the event, not during. So they were much more in favor of more policing, human solutions rather than technological solutions. Yet the trend is towards more technology, not less. We found a lot of these sorts of mismatches between policy and what women want.

We also found that other countries are doing much more. Particularly I'm talking about the U.K., Australia and Canada, that have all incorporated women's voices into transportation planning. And the report talks about some of these efforts from the grassroots level to the institutional level that respond to women's needs.

PLANETIZEN: It's not surprising to me that cameras aren't found effective when it comes to perceived safety. What were some strategies that you found are the most effective?

LOUKAITOU-SIDERIS: Well, when you're dealing with issues of crime or the fear of crime, there's not one solution. It's a combination of things, ranging from where you choose to locate your bus stops – so that they are in settings that enable natural surveillance, that they have good lighting – but also how you connect the different parts of your transportation system.

For example, you have a station platform that is well lit and there are a lot of people around. But if you have to park at the park-and-ride lot and walk to the platform, the walk may be dark. Oftentimes, women are scared of parking lots. So they range from locational issues and design issues to policy issues like having dedicated spaces for women drivers nearby security kiosks. Some other countries have "request stop" programs at night, where women can ask the bus driver to stop where it is safer for them instead of just at the designated bus stop.

I'm not against technological solutions. Buttons that one can press to summon police or connect to 911 if one feel victimized are useful. Women talked about trying to minimize the time when they wait for the bus, so "next bus" or "next train" signs are good. There's a combination of things that transportation agencies should use.

PLANETIZEN: There is obviously a difference here between actual crime statistics and what this report looks at, which is fear and feelings of safety. Did you look at the difference between the two?

First of all, it is two different things. But ultimately what matters for transportation agencies is if people, both men and women, are fearful. If people perceive an area as dangerous, they won't take the bus or the train, no matter what the hard statistics say. So perception of fear, in my view, is as significant as the reality.

Second, there is a tremendous underreporting of crime from women on sexual harassment and assault. So the hard data about crime don't show the whole story. And I'm not talking necessarily about what the FBI calls "type 1" crime, which is the most serious crime. What oftentimes scares is a whole category of crime that involves groping and sexual harassment. Women are quite intimidated to report these kinds of crimes, it is difficult to report, and there is a perception that there is not much that the police can do. And these types of crimes really intimidate women transit riders, and lead them to avoid certain transit modes or use them only during specific times of the day or only when they are accompanied. If you only look at the hard data, you don't see that.

And transit agencies have to do something about this, because after all, 51% of their users are women. So even from the standpoint of expanding the transit market, it is a real issue.

PLANETIZEN: Did you also look at the demographics of the transportation agencies themselves? I assume they are overwhelmingly male.

LOUKAITOU-SIDERIS: The people we asked to survey from the transportation agencies were the general managers and the heads of security, and 75% of the respondents were men. Which I would say is indicative of the field, and certainly at higher administrative levels you find more men than women. This may be one of many explanations of why transit agencies here in the U.S. have not really looked at this issue. If you look into Japan, or Mexico, Brazil, the countries I mentioned before, this issue is being dealt with much more systematically than here in the U.S.

PLANETIZEN: Your "whole journey" approach is fascinating, that transit agencies need to plan not only for the vehicle and the station, but the parking lot and the surrounding approach to the station or stop.

LOUKAITOU-SIDERIS: There are studies in Chicago that find block-by-block that more crime tends to happen in the vicinity of the station than within the station, and my own studies show the same. And that's something more transit agencies need to look at. It's admittedly more difficult to implement, it's easier to protect the enclosed vehicle or the enclosed station. But there are so many components to today's transit stations, like park-and-ride lots, escalators, elevators. They really need to look at all of these components and how they link to the rest of the city, because a lot of the crime happens in these in-between spaces.

PLANETIZEN: So imagine I'm a transportation planner, and I'm reading your interview right now on Planetizen. What would you urge me to do?

LOUKAITOU-SIDERIS: To incorporate women's voices into the planning process. I was asked to speak at a conference recently specifically on women's issues and transportation, and there were some women transportation planners there who were saying, "Well, we have to look only to universal needs." I respectfully disagree, because there are specific needs. Transportation planners really need to look at women's fears in transportation settings and know that there are things that they can do to if not completely eliminate but reduce these fears. These solutions involve policy, design, policing, and outreach and education.

Of course, this costs money. But my work and the work of others has shown that crime comes at hotspots: not every area is equally unsafe. Transit agencies do audits every year, and they know where these hotspots are. So when we talk about limited resources, they could concentrate their resources on these areas.

(University of California Press, 1998), the co-editor of the book Jobs and Economic Development in Minority Communities

, about the social uses of sidewalks was published by the MIT Press in 2009.

The full report can be downloaded here.