Beyond Moses and Jacobs

Jane Jacobs died in 2006. 2007 will be known as the year when modernist city building thundered back into town, courtesy of New York City. There had been advanced warning, of course, with much postmodernist architecture of the late twentieth century resembling modernism decked out for a fancy dress ball, but the coup de grace came this spring and summer with the triple-barreled rehabilitation of that monster of modernism, Robert Moses. The revisionist cycle is now in full tilt. But why? And why now?

Recently, three concurrent exhibits entitled "Robert Moses and the Modern City" have sought to revive the reputation of Robert Moses, long disparaged as the evil genius who, between the 1930s and 1960s, destroyed a liveable New York with his ruthless and authoritarian destruction of neighborhoods. Today's revisionism not only seeks to reposition The Power Broker, as Robert A. Caro's monumental 1974 biography labeled Moses, but to transform him into the hero-saviour -- unfairly scorned -- of a city that had lost its way. In the eyes of the exhibition curators, Hilary Ballon and Kenneth Jackson, professors of architecture and history respectively at Columbia University, Moses "had a greater impact on the physical character of New York City than any other individual," and the result was overwhelmingly positive not negative. Without Moses, the city was sunk: the legacy and accomplishments of the master builder would "equip New York to function in the modern age." As a New York Timesreview concurred, it is time for a "fresh look."

All of this, and the exuberant press coverage accorded the Moses rehabilitation, is anathema to followers of Jane Jacobs whose vision defined a city not by its megaprojects for highways, housing and institutions but by its neighborhood sensibilities -- eyes on streets that people would want to walk down. When Jacobs and a swarm of neighborhood groups took on Moses in the early 1960s, it was a drastically unequal contest: Moses with the power of the city bureaucrats and state coffers, powerful patronages, and multiple alphabet agencies behind him; Jacobs with only the reaction of the goodly but angry citizens determined to preserve their city. And yet in the public sphere, this ideological reaction against big build modernism has somehow prevailed for more than four decades. Even professional planners, who found themselves the powerless tools of a modernist city building that never really ebbed, pined for the possibilities of a Jacobsian city. Out of precisely such frustrations, the New Urbanism sprouted across the ideological and geographical landscape. 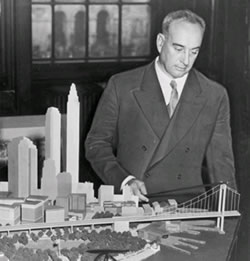 It is hard to think of a starker contrast than that between Moses modernism and Jacobs localism. Yet the standoff between Jacobs and Moses only ever sparred two separate wings of the middle class concerning how to build and rebuild the city for people of greater rather than lesser class privilege. In that divine way that elites do, both appealed to a kind of populism. For the high-born Moses it was a learned populism that promised mobility, housing and recreation for the middle class and a sliver of the deserving working class (by definition white), and brooked no opposition. For the more modestly endowed Jacobs, it was a homeowner, small business populism which, while it took on the city's capitalists, and won, had little room for the working class. Thus in her classic, The Death and Life of American Cities, African Americans have only walk-on parts as drug dealers, park denizens, and perpetrators of crime. A starched morality of class/race propriety came with Jacobs' vision. She had an excellent point about the destructiveness of "cataclysmic capital investment" – had she been more theoretically minded she might have cited Schumpeter's "creative destruction" – but her true heroes were all individuals, upstanding bourgeois citizens, such as the Hudson Street shop owner who would hold your keys for expected visitors (they still exist, but less likely on Hudson Street). His eyes, for Jacobs, not those of working class kids, are the eyes that counted on the street.

The argument between Moses and Jacobs, which Jacobs undeniably won in the popular press if not in corporate real estate board rooms, therefore looks like an argument over the scale of change more than politics. If Moses's tendencies were Mussolini modern, Jacobs's were 18th century small town American bourgeois – localist democratic republicanism. Scale is of course political, but in this case the disagreement takes place in a fairly narrow political band. Where today's Moses revisionists and the Jacobs defenders meet, is in the politics of gentrification. They are for it, just by radically different means.

Moses revisionists laud the possibility of large scale city building, his ability to "think and build big," for Ballon and Jackson. Today that means gentrification, whether via high rise condo construction, the massive redevelopment of abandoned industrial lands, big build redevelopments like Times Square, or the proposed greening of the city via "congestion pricing" which restricts central city access to those with the money to pay. All roads lead to a city that excludes the working class. The vision makes sense only in a Bloomberg New York. Rudy Giuliani, once dubbed the Mussolini of Manhattan by the New York Times, was the social Moses: he unleashed his police force to swashbuckle its way through the unclean signs of crime and disorder, especially in Manhattan, whereas Bloomberg has quietly capitalized by rezoning entire neighborhoods and precipitating a big build condo boom. True, Bloomberg was roundly defeated in his attempt to rebuild west central Manhattan on the back of the 2012 Olympics, but the new Moses of our day, Deputy Mayor Daniel Doctorof, already has other iconic city building projects in the works.

As for Jane Jacobs, she has become the patron saint of a petit bourgeois gentrification whose self-righteousness fortifies itself precisely in its opposition to the big capitalist gentrification of Moses and the master builders. Even if it is largely supplanted around the world by a wholesale remaking of urban space along class lines, block-by-block gentrification persists today and carries the imprimatur of Jacobs' "fix-up-the-neighborhood" ethos. But wonderful diversity in century-old home ownership architecture very rarely means social diversity in terms of class and race. And the new ideology of the "creative city" works precisely by building a four-lane highway between quaint gentrified neighborhoods and city boosterism in the global marketplace. Jane Jacobs' eyes on the street did not intend the consequence of the 1980s "broken windows" thesis, but it created the folk philosophy template upon which Giuliani's zero tolerance was built. And many liberal gentrifiers understood the point enough to support Giuliani's revanchism. The New Urbanism, whatever Jacobs' own ambivalence, now pioneers big build anti-suburban modernism, albeit horizontal more than vertical. The Jacobs mantra harks back to an 18th century individualism, recasting early pioneers as gentrifiers of the country before we had gentrifiers – except of course that the displaced then were native Americans. In the long term, whether one is evicted by Moses and the master builders or by a landlord intent on raising the rent for the "creative class" makes little difference. Eviction remains the result. 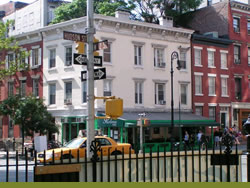 So the emerging political battle over the next shape of the city is hardly one between nasty neoliberal capitalism and cuddly citizen democracy. The neoliberal acid of market calculation has indubitably corroded both state and society down to the bare bones of capitalist necessity – remember Margaret Thatcher: "there's no such thing as society" – and the liberal Jacobsian vision of village globalism is in total nostalgic retreat. But for most people in the world this represents a battle among the privileged. Radically missing, howling in its silence in this entire emerging debate, is the voice of working class neighborhood dwellers, long distance subway riders, grocery store customers, office workers, all of whom lose housing, jobs, services and access, no matter whether Moses wins anew or Jacobs rallies.

The why and wherefore of the Moses revival are therefore obvious. New York City, like cities around the world, is embarking on a neoliberal city building splurge and needs to generate the legitimacy to see it through with the least disruption from its citizens. Whatever the nationalist resurgence around the world after 2001, cities and their regions are increasingly supplanting nation states as the fulcra of the global economy. As French urbanist Henri Lefebvre perceptively saw in the 1970s, city building is becoming an increasingly central plank of capitalist accumulation. The Moses revivers would have a more convincing case if they acknowledged that the master builder's ambition of building prolific public housing will never have a place in today's neoliberal city building vision. And Jacobs nostalgists would also carry more credence if they admitted that public housing was the furthest thing from Jacobs' agenda.

Meanwhile, back among the people, the only thing worse than having to stay in neighborhoods long abandoned by capital, services and landlords is that the landlords themselves become developers or are bought out by developers (private, state or public-private) who force neighborhood residents to who-knows-where. Moses and Jacobs can argue grave to grave. It's time for a new vision of the political city.

Neil Smith is Distinguished Professor of Anthropology and Geography and Director of the Center for Place Culture and Politics at the Graduate Center of the City University of New York (CUNY). Scott Larson is a student in the Department of Earth and Environmental Sciences at the CUNY Graduate Center where he is pursuing a Ph.D in human geography.