Pundits may not be facing up to the ultimate answer to rising energy costs -- our physical environment -- but the American consumer is already deep into the calculus, says Anthony Flint, author of This Land: The Battle over Sprawl and the Future of America.

A friend of mine switched jobs recently, from a big employer in an office park off Boston's second beltway, to offices downtown. Before, he had a two-hour roundtrip commute driving alone in his car; now he walks to the train station in Boston's Roslindale section and rides 10 minutes, just enough time to read the Wall Street Journal, he says. With the shorter commute he's had more time to be active in the neighborhood, where the storefronts on Washington Street are getting makeovers one after the other, and new restaurants seem to open every few months. He marvels at the prices at the local gas station just like everybody else in Boston - but joyfully, he's not filling the tank once a week anymore. More like once a month, if that.

As oil creeps up to $100 a barrel, news stories dwell on outraged SUV drivers shelling out $70 a tank, police departments cutting back on patrols, and calls for waiving state gas taxes. We've learned all about hybrid cars and the need for alternative energy (solar, wind, and hydrogen), energy independence, and conservation. But the discussion always comes right up to the ultimate reason we use so much energy -- our physical environment and how we live -- and then backs away.

Yes, more people are interested in taking transit or walking more. But millions are in no position to do that. There's no transit to take and there's nothing to walk to. It couldn't be more obvious to planners how big a piece of the picture this is -- development patterns predicated on profligate energy consumption. Yet suburban development remains the 800-pound gorilla in the room. The good news is, new forms of development that require less driving and more efficient use of energy are teed up and ready to go. 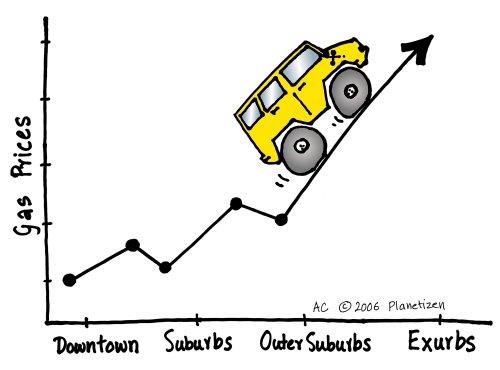 Developers have been aware of a subtle shift in consumer tastes for many years. The real estate industry has picked up on the desire for shorter commutes and a better sense of community. Frustration with long commutes -- and not getting home for the 5:30 Little League game -- has been a big motivation. Now energy prices, whether gasoline or the soaring cost of heating and cooling big homes, are clearly becoming the tipping point for a great redirection away from sprawl.

In Massachusetts, for example, developers are creating mixed-use, walkable, concentrated neighborhoods on closed military bases, failed shopping malls, outmoded industrial parks, and vacant parcels and parking lots right near transit stations. They want to be positioned to meet the new demand, after having exhausted the far-flung suburban market.

Across the country, innovative policymakers are also ready to level the playing field in terms of government regulation and infrastructure investments, which at least since World War II have heavily favored the creation of highways, gas consumption, and sprawling development. What needs to be done is clear, and really isn't even all that controversial: change zoning to allow mixed-use development in town centers, currently prohibited (perversely, in most cities it's illegal to build the kinds of development that more and more people are clamoring for). Cut red tape for urban infill development, which is too often too expensive and time-consuming. Shift investment to transit to make growth functional in urban neighborhoods and older suburbs, just as highways have enabled sprawl.

In researching my book on sprawl and smart growth, I traveled to places that are engaged in classic, dispersed, separated-use development, from Florida to Texas to the Southwest, from Minnesota to Colorado to Idaho. They have their reasons for developing this way. The low home prices have obvious appeal. Americans want safety and elbow room and good schools, and sprawl, ubiquitous, seems to provide all of that.

While Americans are unlikely to abandon sprawl solely because they feel bad about chewing up hundreds of acres per hour, they have begun a personal calculus, examining whether the sprawling lifestyle is really the bargain it's cracked up to be. Factoring in transportation and energy costs adds considerably to those low home prices. Higher taxes to pay for all the far-flung infrastructure and services -- water, sewer, police, fire, schools -- further burden the family budget.

Today, establishing alternative development patterns isn't going to hinge on saving farmland or protecting endangered species or preserving historic sites. It's going to come down to convenience, quality of life, and the pocketbook.

Unlike our recovery after the oil shocks of the 1970s, the current energy situation isn't going to get any better. Historians may look back on today's more permanent crisis as the moment when rampant suburban and exurban development finally lost its luster. Now more than ever, we shouldn't shy away from talking about the physical environment as the single biggest component of our energy woes. Quite the contrary -- this is a moment to be seized by urban planners and policymakers alike. As always, the American consumer is already leading the way.

Anthony Flint, a former reporter for The Boston Globe, is author of This Land: The Battle over Sprawl and the Future of America, now available by Johns Hopkins University Press. More information is available at www.anthonyflint.net.