Critics often use fallacious arguments and inaccurate evidence to attack public transit and Transit Oriented Development. Here are suggestions for responding to their false claims. My recent column, Multimodal Transportation for Economic Freedom, Opportunity, and Security, described many reasons to create more diverse, and therefore more efficient and equitable, transportation systems. Improving active and public transport allows people to choose the best option for each trip – walking and cycling for local travel, public transit for travel on busy urban corridors, and automobiles when they are truly most efficient, considering all impacts. Everybody benefits, including motorists who enjoy less congestion, accident risk and chauffeuring burdens. What’s not to like?

Not everybody agrees. Multimodal planning is often attacked by a small but vocal group of critics. They use incomplete and biased information to make investments in alternative modes, particularly rail transit, seem wasteful and unfair. My new report, Evaluating Public Transit Criticism: Systematic Analysis of Political Attacks on High Quality Transit and How Transportation Professionals Can Effectively Respond, reveals these tricks.

High quality public transit provides large and diverse benefits, including direct benefits to users and indirect benefits to other community members. This is both a strength and a weakness. Critics exploit this diversity of benefits to create doubt and conflict: they attack urban rail that attracts drivers, and therefore reduces traffic problems, as being unfair to disadvantaged people; they attack basic bus services that provides basic mobility for non-drivers for being slow and ineffective at reducing traffic problems; and they attack Transit Oriented Development for the long time required to transform communities and achieve its ultimate goals. Clever critics assemble facts and examples that support these attacks, and use this to sow division among potential transit allies, for example, pitting anti-poverty advocates against urban rail, creating doubt that transit improvements reduce congestion and emissions, and encouraging urban residents to oppose TOD as a threat to their community.

However, this diversity is also an opportunity. Advocates can apply more comprehensive analysis showing that, although transit is not necessarily the best way to achieve any single goal, it is often very cost effective considering all impacts. This diversity of benefits provides an opportunity to build coalitions in support of high quality transit and TOD based on shared goals.

A good example of inaccurate and biased transit criticism is Wendell Cox and Joel Kotkin’s recent report, The Great Train Robbery: Urban Transportation in the 21st Century, which claims that rail transit is expensive, ineffective and unfair. Their arguments typical of those used by critics to exaggerate the costs and understate the benefits of high-quality public transit and Transit Oriented Development. Let's investigate their tricks.

Cox and Kotkin’s basic thesis is that outside a few “legacy” transit-oriented cities with dense central areas, rail transit is outdated and wasteful. They argue that automobile dependency and sprawl are inevitable, efficient and desirable, which ignores surveys showing growing consumer demand for housing in more compact and multimodal communities. They assume that development patterns are static, which ignores efforts by many communities to become more compact and multimodal; in fact, some of the greatest beneficiaries of rail system expansions are suburbs such as Lakewood outside Denver, Silver Spring outside Washington D.C. and Walnut Creek outside of San Francisco. Communities change, so should transportation systems.

They argue that, “New urban rail systems have been exorbitantly expensive.” Expensive compared to what? They use an old propaganda trick: they report that since 1970, U.S. transit subsidies have exceeded $1 trillion, an incomprehensively large number, but the same expenditures could also be reported as $22 billion annually, $88 per year or 25¢ per day per capita, about 15% of roadway spending, about 2% of household motor vehicle expenditures, or a tiny amount compared with total spending on roads, parking facilities, vehicles and fuel for automobiles.

To accurately evaluate cost efficiency the analysis should compare transit costs with the full costs of accommodating automobile travel under the same conditions, including expenditures on roads, parking facilities, vehicles, fuel, and for travellers who lack a driver’s license, the costs of a paid driver. Although high quality transit is not justified everywhere, transit improvements are often more cost effective than the total costs of accommodating more urban-peak automobile trips. Considering the full costs of expanding urban roads and parking facilities, plus every traveller owning and operating a motor vehicle, automobile transportation is really expensive, far more than a multimodal transportation system which allows travellers to choose the most efficient mode for each trip.

Cox and Kotkin ignore evidence that high quality transit tends to increase transit ridership and reduce motor vehicle travel. Many studies indicate that transit ridership tends to increase as rail transit networks expand. They use regional travel data to claim that these impacts are insignificant, although that is an inappropriate geographic scale. New rail projects can significantly increase transit ridership and reduce auto travel on the corridors where they operate, but only serve a small portion of total regional travel, and so have only modest impacts on regional mode shares. However, as urban rail systems expand, so do their regional impacts and benefits. Compared with urban regions that only have bus transit, those with high quality rail transit have far better performance:

Cox and Kotkin cherry-pick examples. They focus on cities with relatively small and new rail transit systems, such as Houston and Phoenix, and ignore cities with larger and more successful rail systems such as Calgary, Charlotte, Minneapolis-St. Paul, Portland and Seattle. For example, after Seattle’s 14-mile Link Rail service began operation in 2009, transit mode share increased from 10 to 12 percent countywide, and from 42 to 45 percent in downtown, resulting in about 32,000 additional daily downtown transit trips: a positive outcome for a single line. They criticize the Houston and Phoenix rail systems for failing to transform regional travel patterns, although those systems only serve a small portion of total regional travel. To make rail transit investments seem ineffective they report declines in regional transit mode shares, but overlook much larger declines in bus-based transit systems.

Many of their arguments are based on fallacies. For example, they argue that Los Angeles' urban rail cannot be effective because only 2 percent of regional employment is downtown, but they fail to report the portion of jobs located in areas served by rail, now and in the future. They criticize Houston’s rail investments for being ineffective and expensive, although it carries 60,600 average weekday trips, equivalent to 5-10 highway traffic lanes. 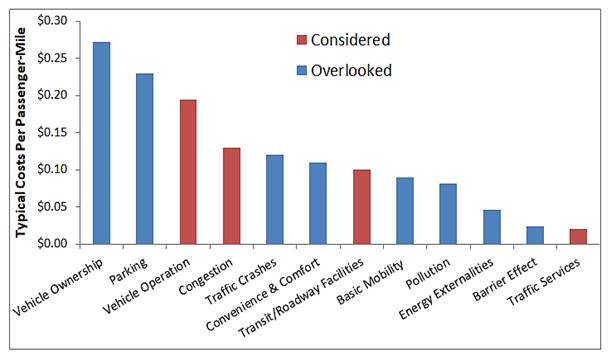 Cox and Kotkin conclude, “…from a public policy perspective, it seems unwise to spend money on additional options for people who can make their way to work on their own. A better approach would be to focus on developing cost-effective new options for those who lack the mobility to reach jobs.” This assumes that rail investments always reduce bus service funding, and that rail transit and Transit Oriented Development provide no benefit to transit-dependent travellers. Neither assumption is necessarily true: most rail transit funds are either shifted from highway accounts or new revenues specifically for higher-quality transit, and many poor people benefit from high quality service provided by rail, and from the many benefits of TOD.

High quality transit can significantly increase affordability, economic opportunity and resilience. An average household saves thousands of dollars annually in transportation costs by living in a rail-oriented city as indicated in the figure below. By improving affordable mobility options, high quality transit allows households to save money when needed, for example if they lose income or incur unexpected expenses, options that are infeasible in automobile-dependent areas. 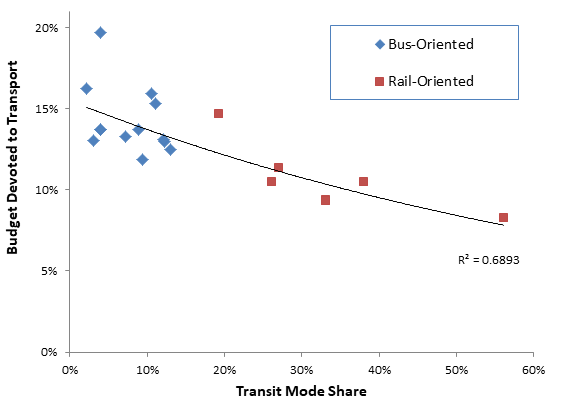 The average portion of household budgets devoted to transportation (vehicles, fuel and transit fares) declines in urban regions as transit mode share increases. Regions with urban rail systems tend to have the highest transit mode shares and the lowest household transportation spending, representing thousands of dollars in annual savings for an average household.  (Based on BLS “Consumer Expenditure Survey” and the US Census “2012 American Community Survey” data.)

The solutions Cox and Kotkin propose would often be ineffective and contradictory. For example, they recommend subsidizing automobile ownership to improve mobility for disadvantaged groups, although that is not useful to travellers who lack driver’s licenses, and would increase traffic congestion, parking problems, accidents and pollution emissions.

Although their report is published by a university, it fails to reflect academic research standards: it lacks peer review, a statement of funding sources or a declaration of conflicting interests.

This is not to suggest that every public transit investment is efficient and optimal, and should never be criticized. Like any major public policy decision, transit investments deserve comprehensive evaluation. Because they often require new funding, major transit projects generally face considerable scrutiny by policy makers, transportation agencies and voters, more than is usually required of road and parking facility investments that can draw on existing funds. Comprehensive evaluation of transit investments can be challenging because, although their costs are easy to measure, many benefits are indirect, non-market and long-term, and so can be difficult to predict with precision. However, a growing body of research and new analysis tools help improve our understanding of transit improvement impacts. Experience indicates that investments in high quality transit can provide high economic returns. The inaccurate and biased arguments often used by critics have no place in serious transportation policy analysis.

Alan Ehrenhalt (2016), “Urbanophobia: A Growing Threat to Public Transit in America: In the Ideological War over Urban Planning, Anti-transit Conservatives are Gaining Funding and Allies,”Governing Magazine.

Reid Ewing, Guang Tian and Allison Spain (2014), Effect of Light-Rail Transit on Traffic in a Travel Corridor, National Institute for Transportation and Communities.

Christopher E. Ferrell (2015), The Benefits of Transit in the United States: A Review and Analysis of Benefit-Cost Studies, Mineta Transportation Institute.

Yonah Freemark (2014a), Recent Trends in Bus and Rail Ridership, The Transport Politic.

2 minutes ago - The Wall Street Journal