The Decline of Carpooling—Can App-Based Carpooling Reverse the Trend?

Contrary to the prevailing narrative about decreasing vehicle miles traveled runs a constant decline in the number of carpools. Very little is known about why Americans are carpooling so much less, so can mobile apps hope to reverse the the trend? Planners have long attempted to get travelers out of single occupant vehicles. It’s been a tough challenge—a little like sweeping water up hill. While trends in bike, walk, transit, and work-at-home have arrested historic declines or shown some growth as commuting modes, carpooling’s decline has been unrelenting.

In 1980 the share of commute trips by carpooling was almost 20 percent. As shown in Figures 1 and 2, carpooling has declined over each decade with the most current data, 2013, indicating a commuting share of 9.4 percent for carpooling nationwide, under half of that in 1980. Record high fuel prices, a challenging economy that should encourage cost-efficient means of commuting, enhanced communication capabilities and public and private promotion of travel demand management initiatives notwithstanding, carpooling has continued to decline as a commuting mode.

Source: Commuting in America 2013, by AASHTO

Source: Commuting in America 2013, by AASHTO

The decline in carpooling is the most significant change in commuting behavior in the past few decades. According to Census and American Community Survey data, in 2013 there were 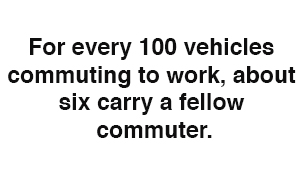 Planners and analysts have often thought that one of the most obvious win-win scenarios for improving mobility while minimizing some of the undesirable impacts of commuting and other travel (e.g., congestion, energy use, air pollution, travel cost, etc.) would be to encourage the utilization of the huge volume of empty vehicle seats traveling on America’s roadways. Overall vehicle occupancy hovers at 1.67 passengers per vehicle and commuting occupancy sits at 1.13 passengers per vehicle (2009 National Household Travel Survey). Modest improvements in occupancy could translate into meaningful reductions in vehicle miles of travel and corresponding benefits in terms of congestion, energy use, emissions, travel expenditures, etc. The transportation system is already moving the seats; we’re just not doing a particular good job of filling them with occupants.

Approximately half of the passengers riding with commuter drivers are other work commuters and half are persons carrying out other activities (e.g., going to school, going to daycare,
etc.). Thus, for every 100 vehicles commuting to work, about six carry another person to some other non-work activity and about six carry a fellow commuter. Various estimates suggest that anywhere from a majority to about one quarter of these fellow commuters are estimated to be "household pools"—a spouse or other family member commuting to work with the driver. Thus, only about three or four out of each hundred commuters are currently picking up another non-household commuter.

Analysts have speculated on a host of causes for the decline in carpooling:

And on a more speculative note:

While carpooling continues to decline and with a limited understanding of the contributing factors, there are huge bets being placed on the ability of technology to enable greater ridesharing. The infatuation with the concepts of the sharing economy and on-demand services is creating an expectation that collective use of assets (including vehicles) enabled by technology can produce greater efficiency and utility. However, the boundaries of acceptance of sharing, and the extent to which it extends beyond sharing things versus sharing personal space, remains to be fully tested by market forces.

The most recent example of the expectation of this sharing behavior is the attention being given to UberPool. The concept behind UberPool is straightforward—a single driver picks up not one, but two passengers who are headed in the same direction. The vehicle then drops off one passenger, and perhaps picks up a third before the first is dropped off. In this scenario, customers are "ridesharing." If the system can be managed to increase occupancy with minimal impact on customer travel time then one can deliver greater efficiency and lower cost. This concept, also implicit in the strategic vision of Lyft and numerous other apps targeting transportation, presumes an ability to consolidate or aggregate demand as a fundamental tenant in improving the efficiency of mobility.

The decline in carpooling over the past few decades suggests that the sales pitch, even if enabled by powerful technology capabilities, may not be easy. The transportation community 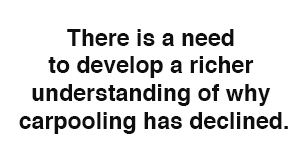 Understanding their behavior may be very different than in prior periods with more robust carpooling levels. Additional research into the causes of the decline in carpooling and the prospects for customer acceptance of shared ride travel under various conditions would serve a critical need. Private entities are investing heavily in app-based carpooling as a viable business model that can help solve transportation problems [1]. The verdict is out regarding the extent to which transportation network companies can help reverse the declining trend in carpooling for commuting or influence overall vehicle occupancy levels for travel for other trip purposes.

If we can’t make carpooling and ridesharing work better and we want transportation to be more resource efficient, we better get to work on scaling the vehicle size to match the passenger load and then see if customers are more accepting of less space than shared space.

The opinions are those of the author—or maybe not—but are intended to provoke reflection and definitely do not reflect the policy positions of any associated entities or clients. COntact the author at [email protected]. Thanks to Dr. Xuehao Chu, Philip Winters, and Alan Pisarski for sharing ideas on carpooling issues and trends. For more on carpooling and commuting see Commuting in America 2013, by AASHTO.

To Carpool or Not to Carpool: That is the Question for Transit Workers in Toronto

Controversy erupts in Toronto after the TTC informed transit employees that it isn't safe to carpool to work…driving people around on transit.

Ride-hailing companies are responding to the coronavirus pandemic with actions that can protect both drivers and riders.