I will be speaking about ways to identify truly optimal solutions to traffic congestion at the Solving Gridlock Forum next Monday in Toronto. In preparation I updated my report, Smart Congestion Relief: Comprehensive Evaluation Of Traffic Congestion Costs and Congestion Reduction Strategies which provides detailed discussion of the methods used to measure congestion problems and select the best combination of solutions.

This is a timely issue. New data from services such as TomTom and INRIX provide more information on where and when roads are congested. Their goal is to convince motorists to purchase their services so their message highlights the severity of congestion problems. Their information is certainly useful for making short-term travel decisions, such as whether and how to travel across town during rush hour, but it is not appropriate for evaluating strategic planning decisions which affect the quality of alternative modes or land use planning decisions, as discussed in my previous column, Smarter Congestion Solutions in 2014.

Comprehensive congestion cost data is needed for strategic planning since many planning decisions involve trade-offs between congestion and other forms of access. For example, converting general traffic lanes into bus or bike lanes, or more compact land use development, may increase congestion intensity, but by improving alternative modes and reducing the distances people must drive to reach destinations, may reduce total per capita congestion costs. Indicators such as roadway level-of-service and the Travel Time Index only indicate congestion intensity, not costs, and so undervalue improvements to non-auto modes and smart growth development policies.

My research indicates that conventional evaluation tends to be biased in ways that exaggerate congestion costs and roadway expansion benefits, and undervalue other congestion solutions. My revised report examines these factors in detail. Let me describe one example.

A key factor in congestion cost analysis is how baselines speeds (the speeds below which congestion delays are calculated) are measured. In the past they were often based on the legal speed limits of each road link, but studies such as the Urban Mobility Report (UMR) now use INRIX data which measure actual freeflow speeds (traffic speeds under uncongested conditions). This may seem like a data accuracy improvement, but freeflow speeds often exceed legal speed limits, which raises an interesting question: Should traffic speed compliance (i.e., reducing traffic speeds to the legal limit) be considered a “cost” which justifies major infrastructure investments to alleviate?

I doubt that most people would agree that reducing traffic speeds to legal limits is a problem that justifies expensive infrastructure investments, yet that is what these congestion costing studies imply. Their reports fail to discuss this or other similar analysis assumptions, so most people who use their results have no knowledge of these issues of debate and uncertainty. In fact, most traffic engineers and economists recommend significantly lower baseline speeds, typically level-of-service C or D, since that tends to optimize traffic throughput and vehicle fuel efficiency, and is more likely to reflect what motorists are actually willing to pay for marginal increases in traffic speeds. 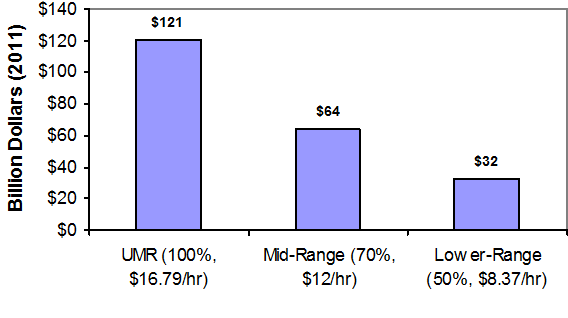 I am not suggesting that traffic congestion is costless and can be ignored, but it is important to put it into perspective: traffic congestion is a moderate transportation cost overall, larger than some but smaller than others, so it is important to consider all impacts when evaluating potential congestion reduction strategies. It would not generally be efficient to implement a strategy that significantly increases other costs, such as vehicle expenses or accidents, but a strategy may be far more beneficial overall if it helps achieve other planning objectives such as reducing parking problems or improving mobility for non-drivers. More comprehensive evaluation helps identify truly optimal congestion reduction strategies, considering all these impacts.

Congestion Compared With Other Transportation Costs

Congestion costs are estimated to range between $110 and $390 annually per capita, depending on assumptions. Even the highest estimate is moderate compared with other transport costs.

My conference presentation will explore these issues and discuss examples of win-win congestion reduction strategies that help achieve multiple planning objectives. There are still spaces available if you want to attend.

TC (2006), The Cost Of Urban Congestion In Canada, Transport Canada.

Threats of Gridlock are Greatly Exaggerated

A few weeks ago the Texas Transportation Institute (TTI) released its latest Urban Mobility Report, and yesterday INRIX released its National Traffic Scorecard 2010 Annual Report. Both paint a grim picture of roadway conditions. “America is back on the road to gridlock,” warns INRIX.