The Law of Traffic Congestion, according to "The Flash!"

<p> <span style="font-size: 10pt; font-family: Courier">Across the world, city-builders who understand the complex relationship between land-use, car infrastructure and road congestion, struggle to communicate it in a simple way that resonates with the public. It&#39;s now well-demonstrated in transportation demand management (TDM) research and practice that you can&#39;t build your way out of traffic congestion by building roads, and in fact the opposite is true - the more free-ways and car lanes you build, the more people drive and the more congestion and other negative results there are.

Across the world, city-builders who understand the complex relationship between land-use, car infrastructure and road congestion, struggle to communicate it in a simple way that resonates with the public. It's now well-demonstrated in transportation demand management (TDM) research and practice that you can't build your way out of traffic congestion by building roads, and in fact the opposite is true - the more free-ways and car lanes you build, the more people drive and the more congestion and other negative results there are. This because of "induced traffic", or the Law of Congestion. As the saying goes, building more lanes to address congestion is like loosening your belt to address obesity.

It's a tough message to get into main-stream media and public discussions, as usually it involves more explanation than short media sound-bites allow. It's particularly hard to find examples of this rather counter-intuitive message in popular culture (which is full of heroic car-culture messaging), where it might reach broader audiences. That's why I was so interested, when over the holidays I was shown a small but effective example of a complex TDM message, in a surprising place.

Venerable super-hero house DC Comics have been giving fresh starts to their iconic characters like Superman, Batman, Wonder Woman and Green Lantern. Also included in this re-boot (pun intended) is the Flash, the fastest man alive ... and undoubtedly the super-hero community's resident expert on efficient mobility! 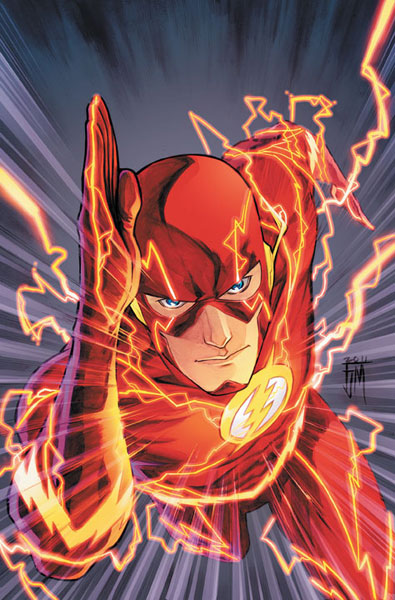 In the new Flash no.1 released a few months back, the issue opens with Barry Allen, the Flash's secret identity, on a date at a huge tech fair in Central City. As Allen admires a proposed green high-speed transit technology that runs on renewable energy, his date asks "if they want to improve traffic, why not finish the downtown freeway?"

Cue the symposium curator and genius scientist, Dr. Elias, who appears and announces that "finishing that monstrosity will just make things worse!"

Allen supports Elias' passion for the mass transit project, but asks "how is adding more roads a bad thing?"

Elias responds "Ever hear of the Law of Congestion? Building more highways doesn't reduce traffic - it does the opposite. It increases the volume of motorists and generates even more traffic", he says emphatically.

Allen's date observes "maybe we should knock them down instead."

"Right!", says Elias. "In Seoul, South Korea they demolished an elevated highway leading to a rejuvenation of the area AND a reduction in traffic..."

Alas, we'll never know what other pearls of progressive transportation planning wisdom Elias and Allen might have shared. Just then, evil villains crash through the skylight and start gassing the symposium, forcing Allen to become The Flash and save the day. They don't reveal it, but I suspect the evil-doers were in fact lobbyists from highway-building interests... 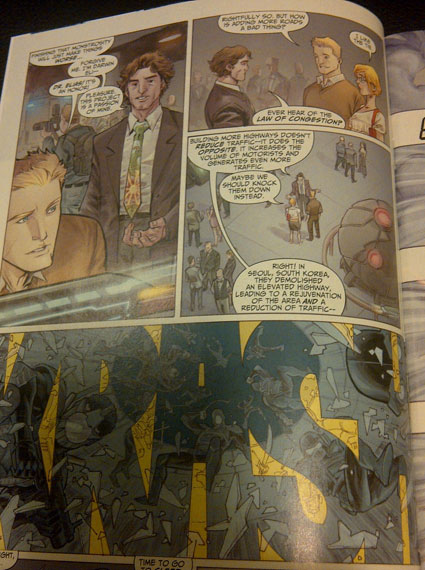 Comics these days are read by adults and kids alike, so its intriguing to see this kind of education and message embedded in a pop-culture back-story. Its a very small example of a good message, in a medium more used to messaging that "cars are cool and more roads equal more freedom and power" (for example, does the Batmobile ever get caught in traffic? Maybe he uses the Bat-plane during rush hour). Perhaps small examples like this can help get people talking and thinking counter-intuitively, about our car-culture and its costs, the relationship between car infrastructure and livability, and even the most effective ways to reduce congestion (if that were our only goal).

Here in Vancouver, we've understood the Law of Congestion for decades, and in 1997 approved a ground-breaking Transportation Plan that reflected this understanding. The Plan confirmed that no new road capacity would be built as population grew, and that modes of mobility would not be balanced, but rather prioritized, in this order - walking first, then biking, transit, goods movement and finally vehicles. As we often say, we rarely ban cars, we just prioritize them last. The 1997 Plan also started a process of strategically converting road capacity over time from cars, to widened side-walks, bike-lanes, bus-only lanes and such to meet our mobility targets. 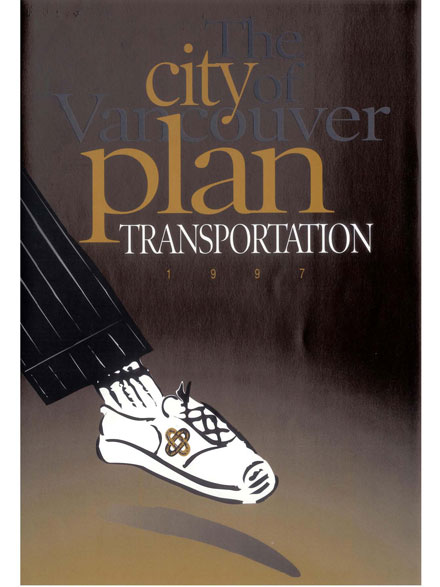 The results, in combination with our use-mix, density and urban design strategies (the things that actually DO reduce car trips and congestion), have been powerful, making Vancouver an international success story for planning and design aligned with TDM. Over 100,000 people now live downtown, a 75% percent increase in population and 26% increase in jobs during the 15 year life of the Transportation Plan, with 15% more people entering the downtown, but a 25% drop in cars coming in. Significantly more "trips", but much fewer car trips and fewer actual cars. Less congestion, and significantly fewer vehicle miles travelled.

As well, the Transportation Plan-making process is frequently credited with taking us from "the Years of the Warlords" where planners and engineers actively battled over ideology, influence etc, to the planner/engineer collaboration and partnership in city-building we now enjoy (a term we frequently use, is "plan-gineers"). Our engineers frequently use one of my favourite quotes: "the best transportation plan is a land-use plan!"

All the while being ranked as one of the most livable cities in the world, and increasingly one of the most walkable, with strong economic resiliency and performance (even during the global downturn), and the lowest greenhouse gas emissions per capita of any city in North America. We're far from perfect, and face tremendous challenges as a city to be sure, but embracing the Law of Congestion has been a big part of making us a model for better city-building.

We're now in the midst of developing our new Transportation Plan Update (watch the video here), with the goal of having walking, biking and transit trips represent over half the trips in the city (we're already well over that downtown, and we're around 40+ percent city-wide). In the past few years we've been making significant moves in bike infrastructure, while continuing our progress with walking and transit (most noteworthy, our very successful Canada Line subway built before the 2010 Winter Olympic Games). Although we are a freeway-free city, we've been inspired by places like Seoul (one of the over 100 world-wide examples of full or partial removal of freeways and similar infrastructure), to rethink the future of our freeway-like viaducts.

Although many global traffic engineers, planners and politicians are unfortunately still mired in the old way of planning for the car, to the detriment of driving and everything else, more and more are learning from successful international models that show a better way.

So thanks to the folks at DC comics for helping spread the word in a small way. Although it remains difficult to get TDM information into the main-stream media and pop culture, they give me hope that we're making progress.

And lastly, if the Flash ever felt the need to leave Central City, he'd be welcome in Vancouver. It's a good city to run in.