The Complex Story Behind the Failure of California's Upzoning Bill

Like the U.S. in the mid-20th Century, much of the growth in Abu Dhabi over the last 35 years has catered primarily to the automobile. But new plans are re-wiring the city to make Abu Dhabi's streets more hospitable to pedestrians.
March 22, 2010, 5am PDT | Gary Toth
Share Tweet LinkedIn Email Comments

Abu Dhabi is a city of almost 900,000 people. It has grown remarkably since 1960, when it was a dusty village of 25,000 whose economy was based on camel herding, pearl diving, fishing and date farming. That was about the time it was discovered that Abu Dhabi –now one of the seven emirates comprising the nation of the United Arab Emirates – was sitting on one-tenth of the world's oil reserves.

With most of its growth occurring after 1975, Abu Dhabi grew during the height of the automobile era. With endless supplies of cheap oil, it was logical that planners built a city based almost solely upon car travel, just as the U.S. did in the 1950s and 1960s when it was the world's leading oil producer. Transit was deemed irrelevant, and the city grew around a backbone of wide boulevards laid out in a grid of super blocks. The downtown is dominated by 20 or more-story buildings fronting these congested boulevards. 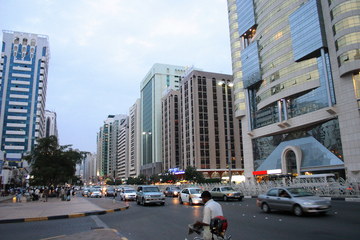 Most of the streets are clogged by illegal parking that is tolerated by municipal authorities. The net result is the same as it has been for every other automobile-oriented city in the world: cars and more cars, backed up 18 hours a day.

With the downtown core developed to capacity, smaller satellite business districts developed wherever there was space.

A few years ago, Abu Dhabi wisely recognized it would be a mistake to continue basing its growth on the automobile and cheap energy. The problems of traffic congestion, resource consumption and environmental sustainability needed to be addressed. In September 2007, the government released Plan Abu Dhabi 2030, which calls for new national performance measures that respect natural resources, the fragile environment, air quality and livability. A nation that has enough oil to last a lifetime has decided to " cautiously use existing wealth, to actively explore renewable energy production, to reduce the consumption of non renewable resources."

The release of this green plan was logically followed by a new set of guidelines on street design, the Urban Street Design Manual (SDM). I played a part in helping Abu Dhabi's Department of Transport, Urban Planning Council, and a consultant team led by Otak International and Nelson Nygaard in shaping the new streets plan.

Abu Dhabi's SDM pays homage to A Policy on Geometric Design of Highways and Streets by the American Association of State Highway Transportation Officials(the AASHTO "Green Book") – America's nearly universally accepted highway design guidebook. While thanking AASHTO for serving as the foundation for the design of the current transportation network in Abu Dhabi, the SDM team concluded that the Green Book does not adequately serve as a guide for " urban streets where modes of transportation other than the automobile are present." 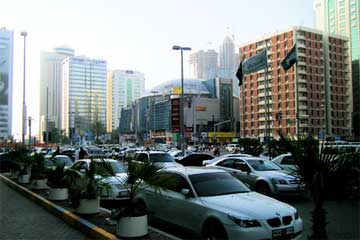 Inside a downtown superblock. Note "illegal" row of
parking in middle of the street.

Abu Dhabi's new plan for street design is based upon the following community-based principles:

Abu Dhabi's Street Design Manual also established policies on several innovative concepts that transportation advocates have long pushed for in the U.S, such as performance measures for pedestrians, transit and bicyclists, not just cars. It recognizes the value of "Streets as Places" and adapts the PPS Street Audit, a survey which transportation stakeholders can use to evaluate their streets, as well as introducing a toolbox of initiatives to promote street connectivity.

A city with enough oil wealth to accomplish whatever it pleases has decided to ease back on auto-dominated development and create a sustainable transportation system for the 21st Century. A city that continues to grow by leaps and bounds has decided to reinvent itself based on placemaking. Why can't we do the same in the U.S.?

Of course, there are some unique circumstances in Abu Dhabi that do not apply in the United States:

While the U.S. clearly faces obstacles not found in Abu Dhabi, there is no doubt in my mind that we can turn the corner toward sustainable and sensible transportation here. Over the past few years, a number of cities and regions have developed progressive design guidelines that link street features and dimensions to the context of local communities. These documents move us toward street designs that encourage appropriate traffic speeds and safe travel for a variety of transportation modes.

Gary Toth has worked over 36 years in transportation and environmental planning, most recently being involved with the integration of both into land use and community planning. He also has been a leader in Context Sensitive Solutions since the beginning of the program in the 1990s. Now retired after 34 years at the New Jersey Department of Transportation (NJDOT), Gary is Senior Director, Transportation Initiatives with the Project for Public Spaces.

The Complex Story Behind the Failure of California's Upzoning Bill