Toward an Ethic of Place: Experiments in Regional Governance

The Crown of the Continent is one of North America's most majestic landscapes. The 10 million acre region -- located in southern Alberta, British Columbia, and northwestern Montana -- is home to First Nations and Native Americans, farmers and ranchers and footloose entrepreneurs, endangered species, wild and scenic rivers, national parks, and wilderness areas.

Yet this vast ecosystem, the headwaters of the Columbia and Missouri rivers, as well as Hudson Bay, is singularly ill-equipped to manage the challenges of the day – energy development, rapid growth in and around Calgary and Kalispell, and the impacts of climate change, just to name a few. That's because governance of the area is highly fragmented, across the United States and Canada, Alberta, British Columbia, and Montana, multiple First Nations, local, state, and federal governments, and private land. Similarly, Greater Calgary is a dynamic metropolitan region, but one struggling with serious urban-suburban conflicts over rapid growth, including water supply and wastewater issues, and the challenges of balancing massive resource extraction from oil sands and maintaining critical habitat for moose, bear, and beaver. But the area is a jumble of 19 different municipalities, all with different priorities and planning missions. 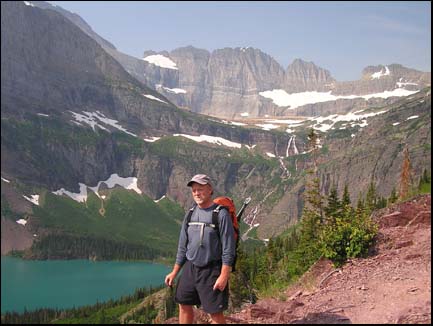 The author, hiking in the Crown of the Continent, Glacier National Park.

The Crown of the Continent and Greater Calgary illustrate one of the most persistent dilemmas in land and water policy: the territory of the land-use, natural resource, and environmental issues we face transcends the legal and geographic reach of existing jurisdictions and institutions. The people affected by this spatial mismatch have interdependent interests, which means that none of them has sufficient power or authority to address the problems adequately on their own. No single entity has the power or authority to address these types of transboundary issues, whether climate change, wildlife corridors, shared water resources, or energy development.

In our work at the Center for Natural Resources and Environmental Policy at the University of Montana, in partnership with the Lincoln Institute of Land Policy, we have identified this need to fill a governance gap, through both informal and formal means. Short of erasing existing political and jurisdictional boundaries, citizens and officials need to develop the capacity to work across boundaries according to the "problem-sheds" of the land and water issues we face in the 21st century.

John Wesley Powell
It is entirely conceivable that – at least in the American West -- these issues would be more manageable today if we had listened to John Wesley Powell. In one of the most impassioned yet ignored theories of regional governance, Powell, after surveying the American West in 1890, argued that the most appropriate institutions for governing western land and other natural resources are commonwealths defined by watersheds.

"There is a body of interdependent and unified interests and values, all collected in [a] hydrographic basin, and all segregated from the rest of the world by well-defined boundaries," he wrote. "The people in such a district have common interests, common rights, and common duties, and must necessarily work together for common purposes."

Powell's insights were largely ignored as the West was settled, but his reasoning underpins many of today's watershed councils, river basin groups, and other natural systems–based regional institutions.

In response to the growing need to work across boundaries, the Lincoln Institute of Land Policy has sponsored research, education, and demonstration projects during the past 10 years to better understand what catalyzes, enables, constrains, and sustains regional or transboundary governance. In my new book Working Across Boundaries: People, Nature, and Regions – recently published by the Lincoln Institute -- I've attempted to capture the lessons learned, provide practical guidance, and chart options for the future.

Practical experience-supported by research into many regional efforts in North America-suggests that there is no single model for closing the gap in governance created by transboundary issues. In fact, the best ways to fill the gap are homegrown, tailored to suit the issue at hand, and adapted to the unique needs and interests of each region. An effective process is needed to address land and water issues that cut across boundaries.

Presenting such a process is quite different from assessing existing policies or plans to deal with such problems, or even generating additional substantive prescriptions. The distinction here between substance and process is not trivial. There is a huge difference between what should be done about a particular transboundary land use or water issue and how people who care about such issues should determine what ought to happen. The first problem is one of substance and the relative effectiveness of alternative policies and plans. The second is one of process-how to bring together the appropriate people with the best available information to address land-related issues that cut across multiple jurisdictions, sectors, and disciplines.

Models for Regional Collaboration
Regional collaboration requires not only principles but a variety of techniques and strategies to help people diagnose regional problems, design an appropriate regional forum, develop and implement regional action plans, and evaluate and adapt their regional initiatives. Three dominant models of regional governance seem to be emerging – networks, partnerships, and institutions (including those with authority and those designed to function as intermediary organizations).

In 1949, Aldo Leopold argued that "a thing is right when it tends to preserve the integrity, stability, and beauty of the biotic community. It is wrong when it tends otherwise." This land ethic, according to Leopold, is based on the premise that the individual is a member of a community of interdependent parts. It provides moral direction on relationships between individuals and society, and between humans and the biophysical community – including soil, plants, animals, air, or – collectively – the environment.

Building on Leopold's vision, Charles Wilkinson wrote that we need to develop an "ethic of place." Such an ethic, according to Wilkinson, "respects equally the people of a region and the land, animals, vegetation, water, and air. [It] recognizes that people revere their physical surroundings and that they need and deserve a stable, productive economy."

Today, emerging experiments in regional governance are reflecting those aspirations, and should be applauded for attempting to bridge the gap in governance. Today we need to work across boundaries, more than ever.

Matthew McKinney is director of the Center for Natural Resources and Environmental Policy at the University of Montana and author of Working Across Boundaries: People, Nature and Regions (Lincoln Institute of Land Policy, 2009).