There are about ten studies on car sharing that relate, to varying degrees, membership in a car share club to the choice of no longer owning a car.  Surveys of members, data from existing programs, and empirical evidence from several developments have shown that when a car share vehicle is available in a convenient location and, usually, combined with transit access, a significant number of people make a decision that it is no longer necessary to own a car. These studies are performed with varying objectives using different criteria; however, a reasonable standard to measure the impact the above relationship has on a development is the ratio of car share vehicles to households that voluntarily forfeit individual car ownership.  While the conversion is not uniform across all studies, an acceptable ratio identified in the various samples seems to range from six to twenty-three.  Some studies forecast that as car sharing becomes more prevalent (and competitive), this ratio could perhaps double.  An interesting side benefit, albeit not studied as much, is the effect car sharing has on total number of vehicle trips generated by a development, since car club members consider the cost of hopping in the car on the fly, as opposed to the sunk cost of car ownership that pays out the more you drive.

The graph below represents the above exercise while increasing the number of car share vehicles from two to fifty.  The 1:10 ratio is used here, but choosing the appropriate ratio is an exercise in engineering judgment that typically involves both empirical data from acceptable comparables and negotiations with local zoning officials.  Note that at some point, the provision of additional car share vehicles is not only unprofitable for the car share club, but also fails to further reduce parking demand.  This can be considered the limit of affected parking demand.  For this demonstration, a limit of twenty car share vehicles is identified; however, the true value for this threshold is more accurately defined by the car share club's finance staff. 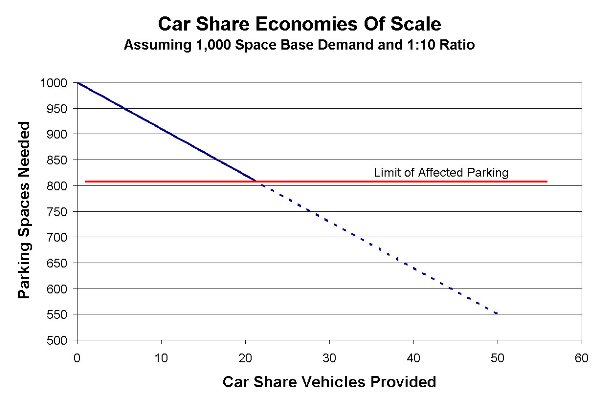 It's important to note that I say car sharing "program" above because sprinkling car share vehicles nearby or even on site is typically not enough realize an appreciable reduction in private vehicle ownership.  Rather, the developer must market car sharing as a feature, include incentives such as subsidized membership fees, and collaborate with the car share club to select the proper mix of car models for the development (Trump recently included BMW, Jaguar, and Mini ZipCars at his new Jersey City luxury high-rise).

While the most applicable use for this new concept is in urban areas with readily available transit service, I believe similar benefits can be gained from use of car share vehicles in more suburban situations as well.  An example is a subdivision street where ten or twenty households each own a second or third car that rarely gets used.  Placement of a car share vehicle to be shared amongst a critical mass of households may significantly reduce the total number of vehicles needed in that community.

Part Time Lover - Is The Car Just An Affair?

America&#39;s so-called “love affair” with the automobile, although cliché, provides a vivid description of how attached we really are to driving.  Public policy, and the historically overwhelming effect of auto industry lobbying, is only partly to blame for the endemic traffic jams and smog of the twentieth century.  Bruce Schaller, a transportation consultant hired by New York City advocacy group Transportation Alternatives, recently demonstrated that urbanites with multiple transportation options still choose to commute by car for rational reasons of privacy, convenience, and speed.  A chart of his, shown below, demonstrates how perplexing this choice is.  Overcoming these reasons is a ser

A new study from KPMG predicts that the U.S. will go from a majority multi-car household to one where only 43% of households have more than one motor vehicle by 2040, and rideshare and car-share, along with demographic changes, will play key roles.