Part Time Lover - Is The Car Just An Affair?

America's so-called “love affair” with the automobile, although cliché, provides a vivid description of how attached we really are to driving.  Public policy, and the historically overwhelming effect of auto industry lobbying, is only partly to blame for the endemic traffic jams and smog of the twentieth century.  Bruce Schaller, a transportation consultant hired by New York City advocacy group Transportation Alternatives, recently demonstrated that urbanites with multiple transportation options still choose to commute by car for rational reasons of privacy, convenience, and speed.  A chart of his, shown below, demonstrates how perplexing this choice is.  Overcoming these reasons is a ser

America's so-called "love affair" with the automobile, although cliché, provides a vivid description of how attached we really are to driving.  Public policy, and the historically overwhelming effect of auto industry lobbying, is only partly to blame for the endemic traffic jams and smog of the twentieth century.  Bruce Schaller, a transportation consultant hired by New York City advocacy group Transportation Alternatives, recently demonstrated that urbanites with multiple transportation options still choose to commute by car for rational reasons of privacy, convenience, and speed.  A chart of his, shown below, demonstrates how perplexing this choice is.  Overcoming these reasons is a serious challenge for any transit authority.  However, the recent trend back towards urban living demonstrates that the suburban life, and its inherent reliance on the automobile was not all forced upon us by lawmakers and marketing strategies.  In fact, the way in which new urbanites have modified their auto-ownership habits provides much insight to how newly urbanized nations can grow. 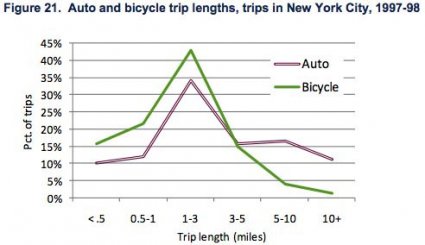 Why, oh why, do so many people drive <3 miles in their car?

Recent statistics released by New York City's Metropolitan Transit Authority are revealing.  "From 1995 to 2005, the authority said, ridership on city buses and subways grew by 36 percent, compared with a population gain in the city of 7 percent."   The city's Department of Transportation concurs, and adds a critical corollary, "From 2003 to 2007, rising levels of mass transit ridership and bicycling commuting accompanied New York City's population and employment growth. Vehicle traffic levels, however, were essentially unchanged."

One inference made from these data is that new residents to the city are choosing to commute by transit, while an "old guard" of drivers continue to commute in and out of the city by car.  If true, it would mean that not only are the new generation of urbanites able to choose more rational forms of commuting in the urban environment, they are willing to do so when these options are made available and satisfy their needs.  Although these same people may choose to own a car for other purposes, part-time driving habits, rather than exclusive daily reliance on a car, means that new urban environments can and should be built to accommodate a more flexible mix of transportation options.

The quick growth of car-sharing services in metropolitan areas also speaks to the waning dependence on individually-owned automobiles.  When car-sharing giant Zipcar recently merged with Flexcar, it was unclear whether this was due to a stronger business plan, or limited market potential.  Rental-car agencies had kept oddly quiet about the effect, if any, Zipcar was having on their urban markets.  But Zipcar's rapidly expanding member-base (they claim to add 1,000 members each week) combined with the recent announcement by Hertz, a car rental company, to offer "Connect" car-sharing services, confirm that Americans are ready to give up their cars if one is available to them for those trips that can't, at least not as conveniently, be made with transit, taxi, bicycle, or on foot.

Developers have been keen to capitalize on the advantages of car-sharing for their projects.  Over 30 developments in the New York City area have recently incorporated Zipcars to their parking plan, providing a much-appreciated service to residents, and acquiring marketing benefits, tax deductions, and LEED credits along the way.  With typical ratios of one car-share vehicle replacing the need for 10 to 20 privately-owned vehicles (when located adjacent to sufficient transit facilities, please see this post for more details), new residential and mixed-use developments can significantly reduce the amount of materials and land devoted to parking.  This leaves developers with more options on limited urban parcels, such as additional open space, bicycle facilities, and denser configurations.  Car sharing companies offer developers special programs that allow for residents to enjoy exclusivity or priority of cars hosted on-site, and these incentives, along with the limited space for privately-owned vehicles, often encourage more residents to sign up and ditch their own car.  Aside from these direct gains, car-sharing has major indirect benefits of reduced vehicle trips, air pollution, insurance rates, etc. 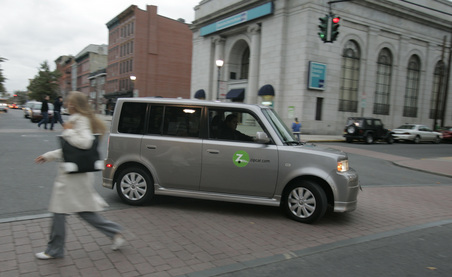 Car sharing services like Zipcar are a smart way to ditch your own car for good.

At the heart of such trends, however, is a convenient, regular, and dependable host of alternative transportation options to minimize the number of trips where using a car seems attractive.  For times when a car is practical, car-sharing may fit the bill.  In other circumstances, owning a car, although not commuting with it, just makes economic sense.  Hoboken, New Jersey is a dense community with very strong transit connections to Manhattan and an overwhelming number of residents new to city life.  Information from the city's municipal parking garages confirm that new urbanites may choose to own cars or use car-share vehicles, but only a small share are commuting with them. Whatever the mix, vehicle trips can drop significantly, congestion can be eased, and we can slowly be weaned from our supposed obsession with driving.  Americans' love with the car is, perhaps, just an affair after all.

Readers: This post is the second in a five-part series on the urgency of getting transportation right for the future's cities. See the first post here.