The grieving period has ended, and now resilient New Orleaneans are taking it upon themselves to rebuild their beloved city. Though it's sure to be a slow process, this could very well be community organization at its best.

Post-Katrina New Orleans has been cited many times in the recent presidential campaign as the ultimate example of government failure. Who would argue with this? If you think government is doing nothing -- or very little -- that is positive in New Orleans, you are correct.

But if you think therefore that nothing positive is happening, you are wrong.

Extraordinary things are indeed happening but not based on either of the master plans already collecting dust after an endless public process, nor because of government policy. Successes all around the city offer lessons for new strategies for a new administration.

Many small and often innovative plans are being made and implemented by a remarkable array of self-organized local groups, energetic residents, small business entrepreneurs, and an unending stream of outside volunteers from churches to university groups and from Americorps to Starbucks and Barnes & Noble.

"Voli-tourism" has been coined to describe the thousands of visiting volunteers.

With meager resources, donations in funds and materials from foundations and thousands of individuals, local activists are battling destructive governmental policies while also doing the jobs that need doing, step by small step. 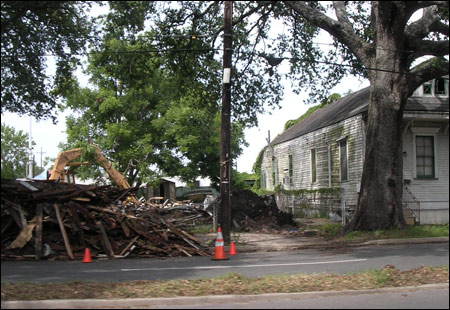 All you had to do was attend a recent one-day conference produced by a coalition of groups to not only gain confidence that New Orleans is rebuilding better -- not just recovering -- but also to recognize that this is exactly how devastated cities regenerate authentically, whether the South Bronx or New Orleans.

"New Orleans Speaks: We Are The Ones We've Been Waiting For" these citizen builders titled their gathering. The energy, determination and savvy was overflowing. As one speaker noted: "There is no other cavalry coming over the hill. We are the cavalry."

Referring to the 200 plus organizations, each with its own focus, spread over the city's 73 neighborhoods, another observed: "This is a home-cooked recovery, plans made on the ground out of conversations around the kitchen table." This is community organizing at its most effective. It's also the kind of community organizing President-elect Barack Obama can relate to.

"This is not a recovery; it is a renaissance," one declared. "We have seen the Dark Ages. The lessons we have learned, no one could teach us."

With names like Save Our Schools, Levee.org, Squandered Heritage, TREE, Get It Done, Latinola, Beacon of Hope and the usual assortment of neighborhood associations with terms like "empowerment", "environment" and "faith-based" included, this untrained but virtual civilian conservation corps has learned more on the job than they could have in a classroom -- and quicker. The collective experience here offers the country a road map for disaster recovery programs of the future. In fact, volunteers from Beacon of Hope in the Lakeview neighborhood went to Iowa to lend a hand and share their experience after the recent floods. No need to spend hundreds of thousands of dollars for consultants to develop disaster response programs. Just study what has happened here.

Most people scoff at the seemingly minimal accomplishments represented by each of these local groups. Dismissed as the proverbial drop in the bucket, observers miss the real picture, failing to recognize that anything is better than nothing, waiting produces less and when small initiatives add up, big change is visible.

How do you quantify the help given thousands of returning home owners, help in navigating the bureaucratic morass for filing damage claims, or technical help with architectural and engineering plans, or access to borrowing rebuilding tools, or, most painfully, help in making sure the city does not tear down their house by mistake or on purpose? Sustainable building materials have been provided, solar systems installed, weatherization of hundreds of homes achieved, innumerable historic houses restored, dozens of modular homes installed on empty lots, neighborhood centers and community spaces created, backyard bioswales dug and even cisterns installed. Remarkably, cisterns were outlawed after yellow fever swept the country in the 19th century and remain illegal. Now special permits are required for them.

More achievements are also beyond measure. Farmers' markets are open in neighborhoods without grocery stores. Fourteen hundred reopened independent businesses have formed the largest alliance of its kind in the country. Plans are ready for implementation to restore the environmentally crucial Cypress Swamp adjacent to the Lower Ninth Ward. Internet information is now available on the location of local businesses and services along with everything one needs to know about every public school. More than 1,000 viable homes have been rescued from city bulldozers, often at the last minute. Corruption in gutting and rehabilitation contracts has been exposed. Many have since been restored and reoccupied. Corruption in letting of renovation contracts has been exposed though not entirely ended. The Squandered Heritage database on the condition and status of properties all over the city is so complete that city officials call these citizen experts to find out what they in the city government are doing.

When fully understood, a dizzying array of accomplishments is here to watch, celebrate and learn from. One speaker observed: "This city has been tested in ways others have not and is incubating remarkable things. This is now a city to invest in not just to give to."

Roberta Brandes Gratz is an urban critic and author of The Living City: Thinking Small in a Big Way and Cities Back From the Edge.

Ten years ago, a number of architecture firms went to New Orleans in the wake of Hurricane Katrina for a humanitarian "experiment"—rebuilding part of the underserved Lower Ninth Ward as an innovative, LEED Platinum, affordable community.

Schools as Agents of Revival in New Orleans

The City of New Orleans is about to undertake a massive reconstruction effort that will reshape and rebuild its entire school system.

The End of People Power Planning?

Thousands of New Orleanians have participated in planning their post-Katrina future – likely more than in any single American city-planning effort, ever. Unfortunately, the New Orleans experience definitively demonstrates the limits of orthodox community-focused planning, the kind that has been neighborhood-based and consensus-driven.